New pacemakers powered by heartbeats could reduce need for surgery

New pacemakers powered by heartbeats could reduce need for surgery

Invasive surgeries could be avoided with new pacemakers powered by heartbeats

By Lois Zoppi, BAFeb 22 2019Reviewed by Kate Anderton, B.Sc.
Scientists are moving closer to developing a new pacemaker that is powered by a person’s heartbeat. 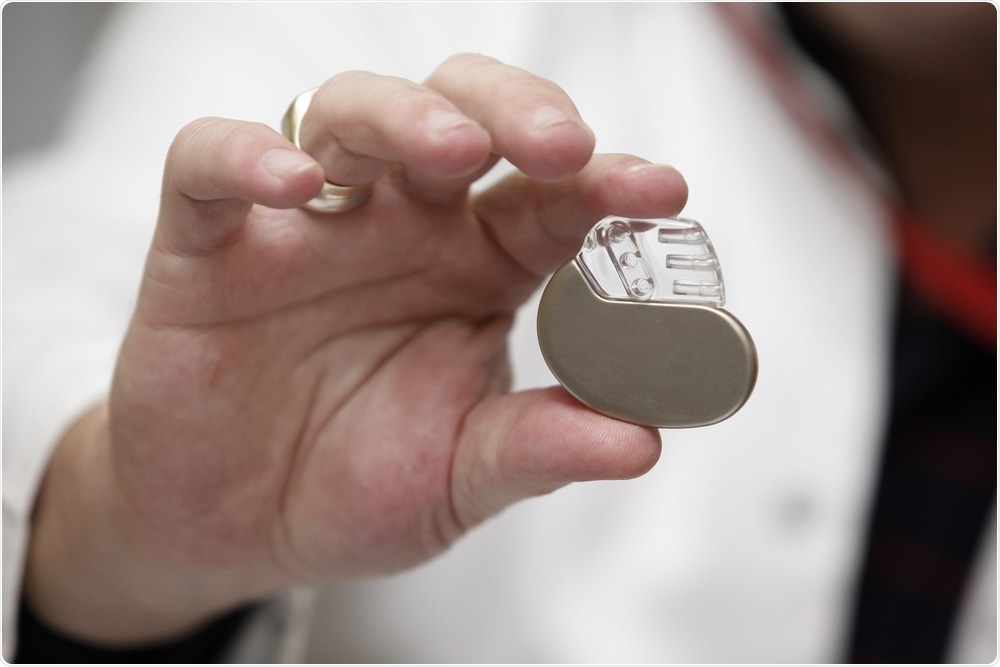 Current pacemakers need to be replaced every 5-12 years. (Picsfive | Shutterstock)
Pacemakers are used to manage heart arrhythmia (irregular heartbeats). These conditions can either manifest as tachycardia (a rapid heartbeat exceeding the normal resting rate) or bradycardia (a resting heart rate of under 60 beats per minute). Arrhythmia can affect anyone of any age.
The problems caused by arrhythmia are triggered by the heart being unable to pump blood around the body properly, with symptoms including fatigue, fainting, difficulty breathing, organ damage, and in extreme cases, untimely death.
Pacemakers keep the heart beating at a regular rhythm by sending electrical pulses directly to the heart. They are made up of two parts: a pulse generator consisting of a battery and a small computer circuit, and pacing leads, which are wires that are attached to the heart.
The pulse generator is usually implanted into a small pocket between the skin and the chest muscle below the collarbone, and the pacing leads are guided through a vein and into a chamber of the heart. The heartbeat is monitored by the pacemaker and regulated by electrical signals sent to the heart.
Most pacemakers also have a sensor that detect both body motion and breathing rate, so signals can be sent to increase the heart rate during exercise.
It’s estimated the 1.5 million Americans have pacemakers implanted, and according to a report published by the American Heart Association, heart disease remains the number one cause of death in the US.
Despite their life-saving function, most pacemakers only last for five to twelve years. For instance, cardiac pacemakers powered by lithium iodine batteries have a lifespan of seven to 10 years.
Invasive surgery is required each time the battery in the pacemaker needs replacing, incurring a risk of infection and bleeding during surgeries and steep financial costs each time the procedure is carried out.
But researchers at the National Key Laboratory for Science and Technology in Shanghai, China, have developed a device that uses the power generated by the heart to run the pacemaker battery. This means that the battery would never have to be replaced, and countless invasive and complex surgeries could be avoided.
Led by Hao Zhang, researchers developed a small, flexible, elastic skeleton bound to two piezoelectric composites, which could generate a high-output current of 15 μA in vivo.
When bent, the piezoelectric layers generate energy, and when the device was implanted and tested on pigs, the researchers found that the movement of the heart could change the frame’s shape.
Subsequently, they found that the new, heartbeat-powered pacemaker generated the same amount of power as a pacemaker powered by a battery.
It is not the first time that scientists have tried to harness the mechanical power generated by heartbeats, with a Swiss team at the University of Bern taking inspiration from auto-winding wristwatches that wind when the user’s arm moves.
However, researchers working on this particular innovation wish to make their device smaller and more efficient before it becomes a regular clinical option.
The report states that the development is an “impressive step toward fabricating a self-powered or batteryless [sic] cardiac pacemaker”, and that it would “exempt the patients from surgical replacement, or at least, less frequently.”
Source:
Li, N., et al. 2019. Direct Powering a Real Cardiac Pacemaker by Natural Energy of a Heartbeat. ACS Nano.
Publicado por salud equitativa en 10:01