By Lois Zoppi, BAFeb 28 2019Reviewed by Kate Anderton, B.Sc.
Researchers have developed a new method for the creation of custom-made proteins that can bypass the protective coating of the HIV virus, allowing antibodies to neutralize the Env gene, which enables the virus to bind and enter human immune cells. 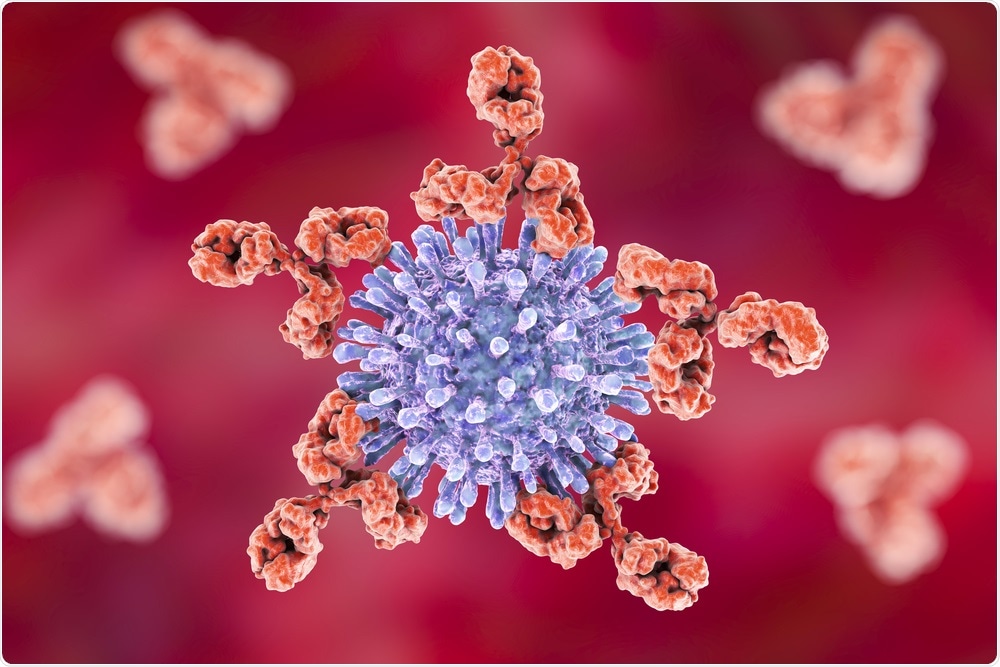 Kateryna Kon | Shutterstock
At the end of 2017, over 36 million people were living with human immunodeficiency virus (HIV), with over 70 million people affected since the beginning of the epidemic. Out of those 70 million, around 35 million died of HIV and 940,000 died of HIV-related illnesses in 2017 alone.
HIV is a disease that damages cells in the immune system and drastically impairs the body’s ability to fight everyday infections and diseases. The symptoms of this condition include a flu-like illness around 2 to 6 weeks after contracting the infection, followed by the progressive decline of the immune system.
HIV doesn’t necessarily present any symptoms after the short illness, and many individuals with the infection aren’t aware they have it.
Although there are effective drug treatments that allow those living with HIV to live full and healthy lives, so far, it has not been possible to create an effective vaccine for HIV.
Nikolay Dokholyan, Professor and Vice Chair for Research in the Department of Pharmacology at Penn State said that this was due to the fact that the HIV virus is always mutating.
It is also because HIV has a carbohydrate coating that protects Env, a protein found on its surface. This coating protects the protein that normally vaccines would be able to target and neutralize.

Dokholyan says that to create an antibody that can recognize and neutralize numerous strains of the virus, scientists would need to “find something that remains constant on the virus for those antibodies to latch onto.”
However, holes (termed ‘glycan holes’) in the carbohydrate coating occur naturally, meaning antibodies would be able to reach the Env protein.
Cheng Zhu, first author of the paper, explains that to be able to target these holes, they could undertake “molecular surgery to copy sections of the virus’ surface and past them onto different, benign proteins, so they would look but not act like the Env protein.”
Zhu hopes that this tactic would “allow the immune system to recognize the virus and create antibodies to neutralize it in the future.”
For the study, researchers “computationally” designed epitopes that imitated the surface of Env through epitope transplantation, in which the “target region is presented on a carrier protein scaffold with preserved structural properties,” as explained in their publication within Nature Communications.
The scientists discovered that the naturally occurring glycan holes in HIV-1 could be exploited with scaffolded immunogens that focus immune responses, and HIV-1 CONEs that are found on gp120, the glycoprotein exposed on the surface of HIV.
In order to achieve a neutralization response that works on a wide scale, the study suggests that “administering a cocktail of CONE mimetics and SOSIP Env protein missing corresponding CONE glycans in successive and combinatorial boosts” could be a possible method used in the development of vaccines.
Analysis of the blood samples revealed antibodies that were capable of binding to HIV. Neutralization assays were carried out by using a panel of HIV-1 pseudoviruses expressing isolate-specific Env proteins and incubating the virus with rabbit serum.
Regarding the efficacy of inhibition on HIV-1, the study noted it was “modest” with the anti-CONE 1 sera, although the “consistency of the effect against multiple isolates of HIV-1 Env pseudoviruses is indicative of robust activity.”
Zhu explains that through the study they “were able to show that by using our designed proteins, the blood was able to spontaneously generate antibodies that can inhibit the infection of HIV in cellular models.”

When we incubated the HIV virus, its infectivity was dramatically reduced by the rabbit’s blood.”
Cheng Zhu, First Author

While the study claims that “rational protein design has reinvigorated vaccine efforts”, Zhu clarifies that the immunogens that have been developed are not a “finished product”.
However, Zhu enthuses that it is “very exciting that we were able to create a new method to tailor make proteins, which could open the door for developing vaccines for other infections, as well.”
Looking to the future of fighting HIV and considering the emerging role of personalized medicine, Dokholyan said that the antibodies’ ability to neutralize the virus still requires improvement before it can become a “viable vaccine”, but “if we can easily customize proteins for vaccines, that’s a good example of where personalized medicine is going to play a role”.

In the future, the protein design method could potentially help create and personalize vaccines for different diseases in various areas in the world”.
Nikolay Dokholyan