By Lois Zoppi, BAFeb 14 2019Reviewed by Kate Anderton, B.Sc.
A new study has found that slow-swimming sperm are disadvantaged by narrow areas of the female reproductive tract, preventing them from reaching an egg. 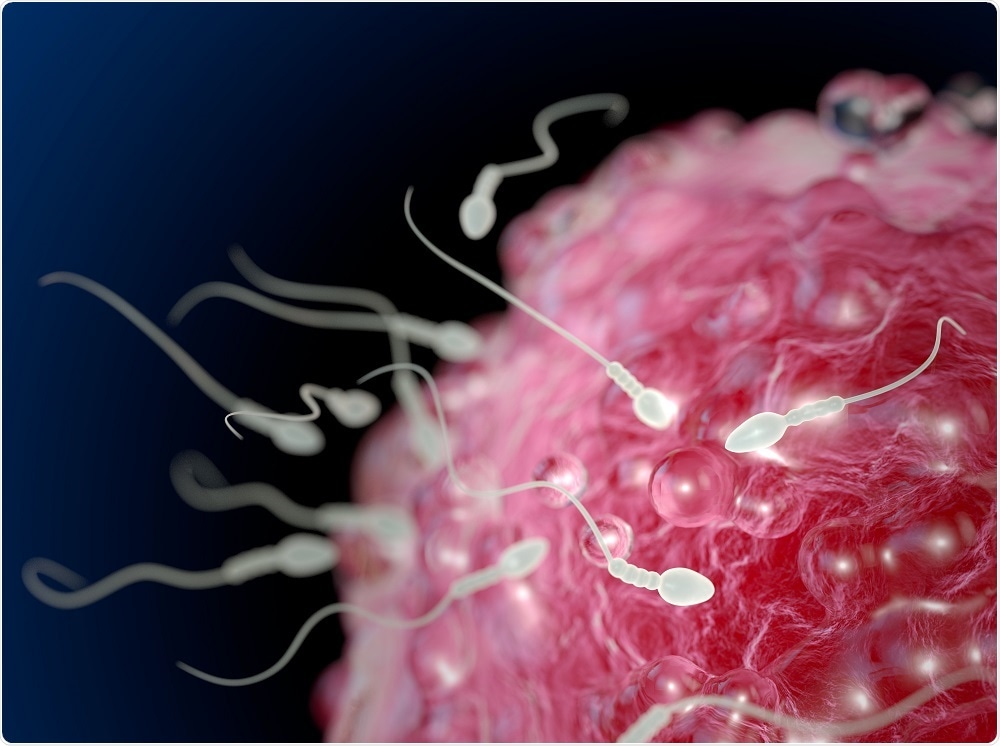 medistock | Shutterstock
Less active sperm may never have the chance to reach an egg due to obstacles within narrow areas of the female reproductive tract known as strictures.
Strictures include areas such as the opening from the uterus to the fallopian tubes. Weaker sperm swimming against the flow of fluid throughout the tract may not possess the strength to successfully overcome the stronger currents occurring at narrow passages, giving faster sperm a distinct advantage.
After ejaculation, sperm must travel through the entire female reproductive tract before reaching an egg, overcoming a series of obstacles.
The female reproductive tract includes the vagina, cervix, uterus and the fallopian tubes. The journey is all done upstream against fluid that flows at different speeds at different parts of the tract.
The effect that narrow areas of the reproductive tract have on a sperm’s ability to successfully make it to an egg has not been previously studied, with earlier investigations focusing on the way that sperm stay close to the walls of the reproductive tract to effectively guide themselves towards an egg.
Many studies have made use of long, straight swimming channels, which do not accurately reflect the conditions inside the female reproductive tract. As the fluid flows faster at strictures, the sperm must exert extra effort to pass it.
Although mechanical engineer David Sinton was not involved in the study, he said that the devices used to study how sperm moved tested “both endurance and sprinting” and that he believes “both abilities are needed” inside the reproductive tract.
For this study, a “microfluidic” device was used, along with computer simulations that accurately mimicked the varying widths of the reproductive tract.
Using sperm from both men and bulls, it was observed that the stronger swimmers began to move in a butterfly-shaped path and successfully made it through, while weaker sperm were washed backward.
Co-author of the study Alireza Abbaspourrad explains that “the overall effect of these strictures is to prevent slow sperm from making it through and to select for sperm with highest motility.”
A biophysicist at Cornell University, Abbaspourrad added that the “most surprising part for us was the way sperm swim on this butterfly-shaped path.”
Shedding light on the benefits of this swimming pattern, Abbaspourrad said:

The shape of the path leads to an accumulation of the sperm such that the faster sperm stay closer to the stricture and to each other while the slowest sperm are swept back by the flow and spread further apart.”
Alireza Abbaspourrad, Co-author

This effectively forms a hierarchy in which the sperm with highest motility are closest to the stricture.
One experiment showed that a single sperm swimming at 84.2mm per second was able to make it through one of the strictures, while currents pushed the other sperm back, with the weakest swimmers pushed back the furthest.
Allan Pacey, a professor of andrology at the University of Sheffield explained that the results “show that only the fastest, and therefore assumed best, sperm can pass through these narrowings against a fluid flow,” and that it makes “perfect biological sense and would help to explain how the female reproductive tract is able to make sure the best sperm reach the egg.”
Source:
Zafarani et al. 2019. Strictures of a microchannel impose fierce competition to select for highly motile sperm. Science Advances.
Publicado por salud equitativa en 6:20