We performed a descriptive analysis of demographic and clinical data of inpatients treated for extrapulmonary TB at Beijing Chest Hospital from January 1, 2008, through December 31, 2017. Beijing Chest Hospital, designated a National Clinical Center on Tuberculosis, is a 900-bed hospital that delivers specialized treatment for TB and thoracic tumors. This hospital provides tertiary care for TB patients from Beijing municipality and parts of surrounding regions and accepts severe TB case referrals for patients originating from other regions of China. In addition, the hospital, under the oversight of the hospital authority, ensures compliance with strict protocols for patient care.
Patients who come to the hospital with TB symptoms and who are presumed to have TB disease are asked to provide 2 sputum samples for laboratory testing. Samples are routinely tested for pulmonary and extrapulmonary TB, including microscopic examination, mycobacterial culture, or molecular testing. In addition, tissue specimens also are analyzed in the histology laboratory. Active TB disease is diagnosed by meeting >1 of the following criteria: 1 smear-positive or culture-positive specimen; positive histology (i.e., the presence of acid-fast bacilli in Zeihl-Neelsen–stained histological section); or TB history and strong clinical and radiographic evidence supporting the presence of active TB. The diagnosis of extrapulmonary TB followed the definitions and categories defined in the national guidelines for diagnosis of extrapulmonary TB in China (17).
During the timeframe of our analysis, 20,534 patients meeting the criteria for active TB were hospitalized at Beijing Chest Hospital. Hospitalization criteria included TB requiring surgery, severe or complicated TB, and admission at patients’ request. Cases are categorized by major disease anatomic site and reported as either pulmonary TB or extrapulmonary TB. For our study, we excluded patients who were co-infected with pulmonary TB and extrapulmonary TB (1,255/20,534) from our descriptive statistics and risk factor analyses because their illnesses were not distinctly classifiable as either pulmonary TB or extrapulmonary TB (5). According to classification schemes described in previous reports, the extrapulmonary TB group included any extrapulmonary disease forms (i.e., pleural, lymphatic, skeletal, genitourinary, meningeal, and others) (5). In our study, disseminated TB refers to active TB detected in >1 noncontiguous anatomic site, miliary TB, or Mycobacterium tuberculosis isolated from blood samples.
The hospital’s electronic patient record system documented inpatient illness, treatment, and care over time. We collected multiple demographic and clinical variables from electronic patient records to conduct comparative analyses between extrapulmonary TB and pulmonary TB groups, including sex, age, ethnicity, place of residence, previous TB episode, and concurrent conditions. Beijing Chest Hospital screens all patients for diabetes, according to national guidelines. These guidelines stipulate a fasting blood glucose test be performed by using venous plasma and a biochemical analyzer; a fasting blood glucose value ≥7.0 mm (126 mg/dL) was deemed a positive result for diabetes (18).
The hospital’s clinical laboratory tested all positive mycobacterial cultures for drug susceptibility by using an absolute concentration method, according to WHO guidelines (19). Because clinical laboratories have performed routine drug-susceptibility testing for first- and second-line drugs since the 1990s, we compared extrapulmonary TB and pulmonary TB cases on the basis of previously established in vitro drug-susceptibility profiles for multidrug-resistant TB (MDR TB, defined as resistant to both rifampin and isoniazid) and extensively drug-resistant TB (XDR TB, defined as MDR with additional resistance to any fluoroquinolone and second-line injectable drug).

We tabulated numbers and proportions of cases along with various demographic and clinical factors contributing to TB incidence and used univariable and multivariable logistic regression models to investigate factors associated with extrapulmonary TB. Multivariable models were built by using forward stepwise logistic regression procedures (with inclusion if p<0.05). For each anatomic site of disease, we tabulated the proportion of TB cases also by the year that a patient sought treatment. To analyze trends in the proportion of cases by anatomic site of disease, we used the χ2trend test. We performed all calculations by using SPSS version 17.0 for Microsoft Windows (SPSS Inc., http://www.spss.com.hk). For p values <0.05, differences in distribution of categorical variables across various classifications were evaluated for statistical significance. A p value <0.05 for the χ2 trend test indicated that there was a significant change in the proportions of pulmonary TB and extrapulmonary TB over the duration of the study period.

This study was approved by the ethics committee of Beijing Chest Hospital (grant no. 2016-29), which is affiliated with Capital Medical University. This study used data collected from patient records while maintaining patient anonymity. Because this study presented no more than minimal risk of harm to patient subjects, the institutional review board approved a waiver of patient informed consent.
Top 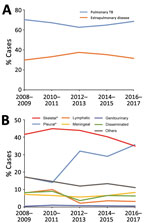 We thank all the staff of Beijing Chest Hospital who helped collect clinical data in this study. We also thank Tripti Pande for her helpful comments on the manuscript.
This study was supported by the Beijing Municipal Administration of Hospitals’ Youth Programme (QML20171601).
Top