By Liji Thomas, MDFeb 8 2019Reviewed by Kate Anderton, B.Sc.
Despite popular belief, drinking beer before wine does not reduce the severity of veisalgia, otherwise known as a hangover, the following day. This statement was confirmed by a recent study. 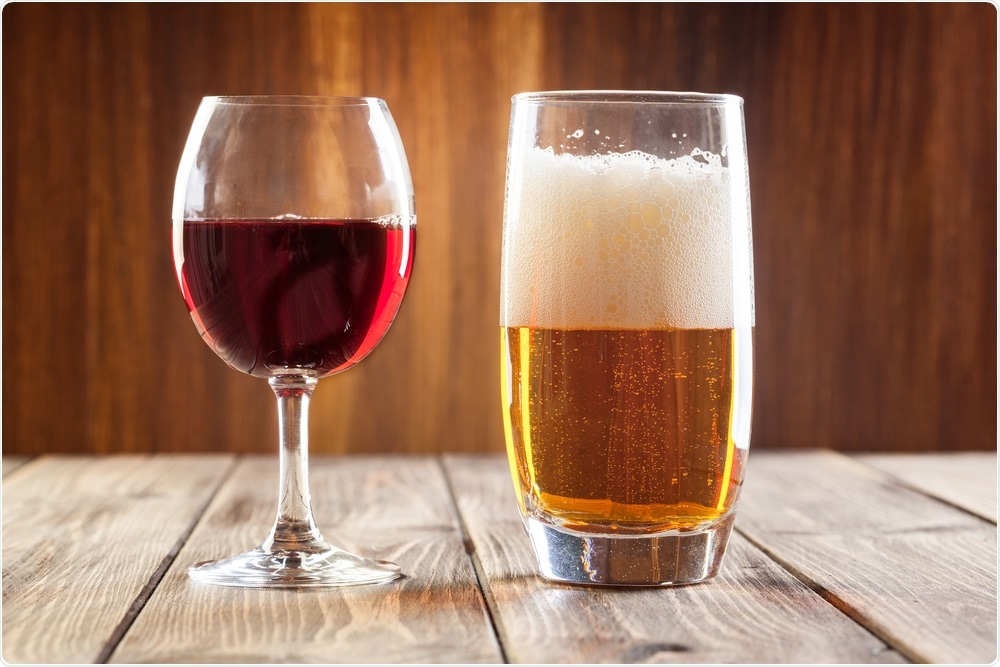 Slawomir Fajer | Shutterstock
The study included 90 German students between the ages of 19 and 40 years, who are currently studying medicine or psychology. The students were split into two groups of 31, as well as a control group of 28. The participants within each groups were roughly matched with respect to age, body mass index and previous drinking habits.
In the first study group, volunteers drank beer, followed by wine. The second group also drank these beverages, but in the reverse order. Both groups drank to the point of moderate to severe intoxication over several hours, that is, a breath alcohol concentration (BrAC) of 0.11%. To ensure the results were fair, the control group drank only one of these beverages.
In total, the study group volunteers drank an average of 2.5 pints of lager (beer), and four glasses of white wine. This amount would produce a hangover, but not one so severe that the participants would not take part in the study the next week.
All participants finally drank cold water before going to sleep.
The two study groups were switched after an interval of more than one week, and so were the control group beverages.
The next day, each subject assessed the severity of the hangover using the Acute Hangover Scale, which included symptoms like headache, dizziness, nausea and tiredness. This was the primary endpoint.
The study showed that the order in which different alcoholic drinks were consumed had no significant effect on the severity of the hangover the following day.
Instead, hangover intensity was best predicted by whether the patients themselves felt that they were getting drunk, or if they threw up during their drinking. These predictors were the secondary endpoints. These metrics are useful, as they reflect the physiology and tolerance of alcohol of the individual.

The truth is that drinking too much of any alcoholic drink is likely to result in a hangover. The only reliable way of predicting how miserable you'll feel the next day is by how drunk you feel and whether you are sick. We should all pay attention to these red flags when drinking."
Jöran Köchling, Lead Author

A couple of study limitations were that: one, the study groups couldn’t be blinded as the subjects knew they were becoming drunk once the BrAC reached 0.08% or above. Two, controls could not be found who were willing to participate in a study on drinking alcohol by abstaining.

One should be mindful of the important benefits of a symptomatic hangover—a protective warning sign that will certainly have aided humans over the ages to modify future behavior.”
Says Hensel, Lead Author

The best way to prevent a hangover, therefore, is ceasing to drink beyond a specific point. If you feel drunk, stop drinking. The official advice from the US Centers for Disease Control and Prevention is to stop after a daily quota of one drink for women, or two for men.
The study was published today in the American Journal of Clinical Nutrition.
Publicado por salud equitativa en 10:47