Genome degradation has been central to the adaptation of Salmonella enterica serotypes to their hosts throughout evolution. We witnessed the patho-adaptation of a strain of Salmonella Dublin (a cattle-adapted serotype) to a human host during the course of a recurrent prosthetic hip joint infection evolving over several years.
Salmonella enterica serotype Dublin is a host-adapted bacterium with cattle as a predominant reservoir and is responsible for invasive, potentially life-threatening infections in humans (1,2). In France, the epidemiology of Salmonella Dublin infections among humans corroborates surveillance data from the United States (1). Salmonella Dublin causes substantially more bloodstream infections and hospitalizations than other Salmonella serotypes. It is also much more likely to be isolated in metastatic foci of infection secondary to bacteremia. The prevalence of prosthetic joints in Salmonella Dublin patients is significantly greater than for other Salmonella cases (Table).
Host adaptation is central to pathogen evolution and is associated with gene acquisition, genome degradation (gene inactivation or deletion), or both. Genome degradation has played a major role in the adaptation of S. enterica serotypes Typhi and Paratyphi A to the human host throughout evolution (3). Degradation also has been recently reported in a severely immunocompromised patient in whom recurrent systemic Salmonella Enteritidis infections developed over 15 years (4). We report the phenotypic and genomic changes undergone by Salmonella Dublin throughout a recurrent prosthetic hip infection in an immunocompetent patient. 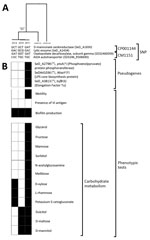 Figure. Genomic and phenotypic characteristics of Salmonella entericaserotype Dublin isolates Str.2011, Str.2014, and Str.2015 from a 74-year-old woman who had recurrent infections involving hip joint prostheses, France. A) Tree constructed after...
We studied 3 patient strains: Str.2011 (May 2011, left hip intraoperative periprosthetic tissue [HIPT]), Str.2014 (April 2014, right HIPT), and Str.2015 (June 2015, right HIPT). Unlike Str.2011, Str.2014 and Str.2015 were nonmotile with no detectable H antigen and had lost the ability to use 9 of the 18 carbohydrates used by Str.2011, with slight profile variations (Figure). All strains could form biofilms and had identical wild-type antimicrobial drug susceptibility profiles and unchanged MICs for β-lactams and quinolones, without mutations in gyrA, gyrB, parC, and parE genes. All 3 strains belonged to the sequence type 10 Salmonella Dublin population (http://mlst.warwick.ac.uk/mlst/dbs/Senterica). The mapping of Str.2011, Str.2014, and Str.2015 genomes against the Salmonella Dublin CT_020221853 and str.3246 reference genomes detected 451 and 268 SNPs, respectively, whereas the 3 patient strains differed by only 6 SNPs, strongly suggesting they derived from a single infecting strain. Four SNPs were nonsynonymous in coding genes; 2 SNPs were in an intergenic region (Figure).
Comparative proteome/proteome analysis detected putative pseudogenized sequences that were due to indels within 3 coding sequences in Str.2014 and Str.2015. These pseudogenes were involved in carbohydrate transport (ptsA) (14-bp deletion), lipopolysaccharide (LPS) biosynthesis (waaY) (16-bp insertion), and protein synthesis (tufB) (790-bp deletion, total gene deletion); we identified no pseudogene among the genes of the flagellar regulon. The pseudogene involved in carbohydrate transport, ptsA, controls the import of carbohydrates, such as mannose, fructose and N-acetyl-glucosamine (9), 3 carbohydrates used by Str.2011 but not Str.2014 or Str.2015. Mutation of the LPS biosynthesis gene waaY in Str.2014 and Str.2015 had apparently no effect on the expression of the Salmonella Dublin O antigen but might have affected flagellar assembly and function, as described for SalmonellaTyphimurium and Escherichia coli (10,11). The mutation of tufB in Str.2014 and Str.2015 leads to a one third decrease in the production of the translation elongation factor EF-Tu (the other two thirds is synthetized from tufA) (12).
The patient in this study had no detectable gallbladder or intestinal carriage, which has been associated with recurrent Salmonella infections (13). She had no apparent immunodeficiency, a well-documented risk factor for invasive Salmonella Dublin infection. Salmonella Dublin most likely persisted as a biofilm at the surface of the implants, leading to recurrence of chronic disease despite prolonged antimicrobial therapy until the ablation of the infected material (14). The genomic changes we observed involved carbohydrate metabolism and LPS biosynthesis, as similarly reported for Salmonella Enteritidis isolates recovered from the bloodstream of a severely immunocompromised patient, years after the initial infection (4). Changes in carbon source availability are known to affect virulence gene regulators. In the presence/absence of a specific carbon source, specific virulence genes can be turned on or switched off, enabling pathogens to adapt to their new niche (9). Because LPS and flagellin are potent triggers of the inflammatory response, LPS alterations and the loss of flagellin expression (15) might have limited the host’s innate immune response to Salmonella Dublin and facilitated its persistence at the implant interface.
Top

This clinical case and other recent reports of patients with chronic infections highlight the remarkable adaptability of pathogens to a new niche. More specifically, these results show that the process of patho-adaptation of Salmonella serotypes may be extremely rapid and relies on mechanisms of genomic reshaping reminiscent of those found during the evolution of this pathogen in contact with humans. Enhanced awareness is warranted for Salmonella Dublin, especially in the elderly bearing prostheses.
Top
Ms. El Sayed is a postgraduate fellow in clinical bacteriology of Ambroise Paré Teaching Hospital in Paris. Her research interests include bacteria adaptation and epidemiology in bone and joint infections context.
Top

We thank Vincent Enouf and Laetitia Fabre for processing the whole-genome sequencing and microbiological information, respectively. We are grateful to all the microbiological laboratories who participated in the human Salmonella network for processing the isolates.
This work was supported by the French National Reference Center for Escherichia coli, Shigella, and Salmonella, co-funded by Santé Publique France and belonging to the Integrative Biology of Emerging Infectious Diseases Laboratory of Excellence funded by the French Government Investissement d’Avenir program (grant no. ANR-10-LABX-62-IBEID).
Genomics sequence assemblies used in this project are available online on the National Center for Biotechnology Information network under accession no. PRJNA433355 (available at http://www.ncbi.nlm.nih.gov/bioproject/433355).
Top