By Liji Thomas, MD
Quinsy, or peritonsillar abscess, is among the commonest deep infections of the adult head and neck. In contrast to tonsillitis, it occurs in adults and the bacteria responsible are different, thus it appears to be a different condition rather than a late complication of tonsillitis.
Both males and females are equally affected. The most commonly involved bacteria include Group B beta-hemolytic streptococci (Streptococcus pyogenes) and Fusobacterium. The incidence is about 45,000 cases a year in the US. 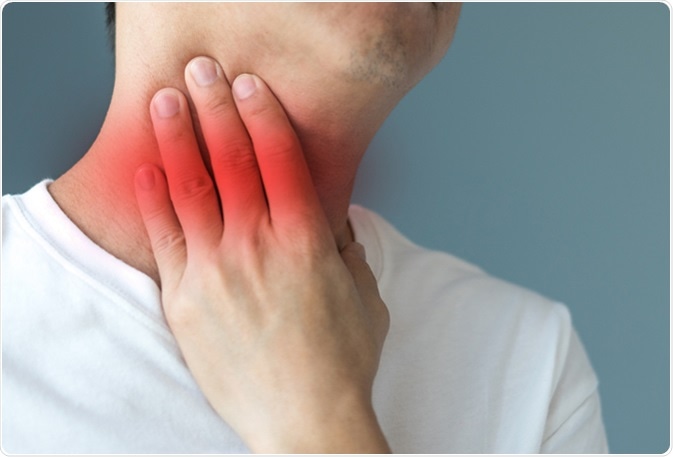 A quinsy is thought to be due to suppuration of tonsillar tissue or remaining tissue at the upper tonsillar pole if the patient has already had a tonsillectomy, extending into the loose surrounding areolar tissue.
An embryological remnant of the second internal pharyngeal pouch may form a congenital fistula, providing another explanation for the formation of a quinsy after tonsillectomy, because the scar formation after the surgical procedure may block off this tract and prevent the free drainage of any infection occurring therein.
Dental infection may also play a role in its etiology. Again, injury to this area, the presence of foreign bodies, tuberculosis or syphilis may lead to lesions that result in quinsy formation.
It has also been thought that tonsillectomy itself weakens the local immune response and increases the risk of infection in this region.

The presentation of quinsy is most commonly with fever, throat pain and difficulty in opening the mouth because of pain. The voice characteristically sounds muffled , there is pain over the ear on the same side, and the patient finds it painful even to swallow saliva.

The history and physical examination are quite suggestive. The peritonsillar area on the affected side is swollen and reddened, while the soft palate is inflamed and the uvula pushed to the side opposite the swelling.
An intraoral ultrasound scan yields a correct diagnosis in up to 95% of cases, while its specificity ranges from about 80-100%. I t can also be taken from the outside if the patient has significant trismus.
The first steps in management are antibiotics that cover both aerobic and anaerobic bacteria . Steroids may be used to alleviate the symptoms of pain and swelling and to reduce the recovery period. However, they also weaken the immune response.
While aspiration of the peritonsillar abscess is generally considered to be the gold standard in management, providing both a confirmation of the diagnosis and relief of the condition, incision and drainage may also be considered equally effective.
Tonsillectomy as part of the management at the time of presentation is a safe procedure and results in a more rapid recovery, in contrast to interval tonsillectomy at 3-6 months after the initial management of quinsy.
It is more convenient and reduces the need for follow-up, as well as avoiding a second admission, and providing immediate relief.
However, it may be considered overtreatment as the majority of patients are completely cured following a needle aspiration in competent hands.
A quinsy may recur in 9-22% of patients, and indicators of high recurrence risk may be used to select a group for interval tonsillectomy following successful initial resolution of the abscess.
These indicate the presence of dental disease or dental interventions, congenital fistulae, and recurrent tonsillitis.
Reviewed by Catherine Shaffer, M.Sc.