Asthma is an increasingly prevalent chronic disease that affects the airways leading to and from the lungs. The disease is principally characterized by a reversible airflow limitation and obstruction, bronchial hyper-responsiveness and airway inflammation, accompanied by an overproduction of mucus. 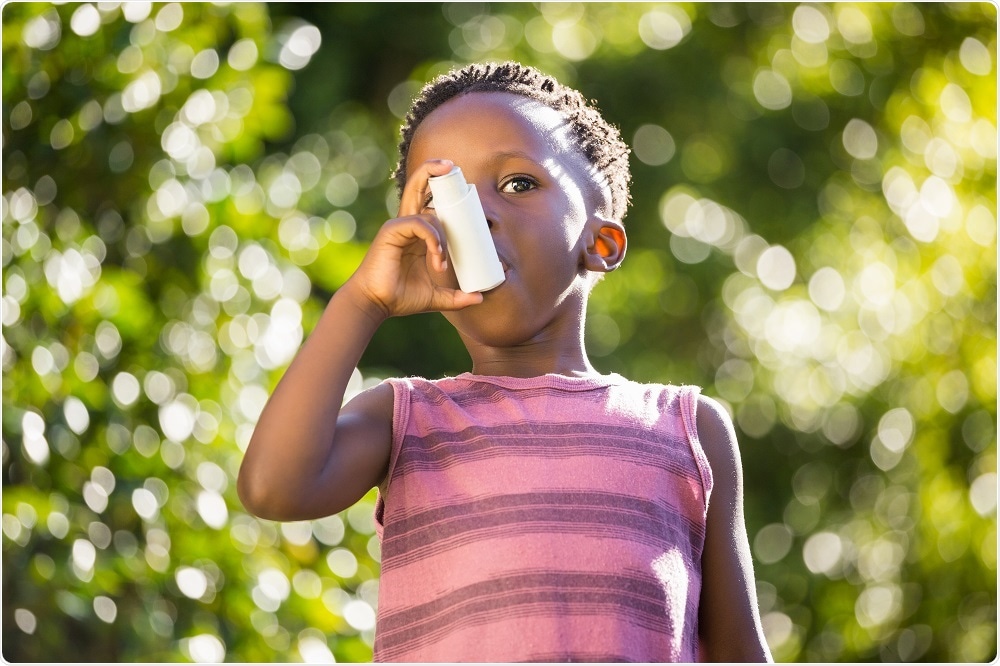 Credit: wavebreakmedia/Shutterstock.com
Symptoms of asthma include wheezing, coughing, shortness of breath, chest tightness, and episodic airflow obstruction known as asthma attacks. The airflow obstruction can sometimes be so severe that it can be fatal.
Asthma is often cited as the most common chronic disease in childhood and although it can be controlled to different extents, it has no cure. As such, the disease has significant adverse impacts on the quality of life of a considerable number of affected children, and their families.
Asthma and its symptoms can restrain school and outdoor play; cause absenteeism; night and sleep disturbance and impose a burden on caregivers to monitor symptoms and administer medication.

How is asthma diagnosed?

Asthma is diagnosed using objective clinical tests, for example, measuring Forced Expiratory Volume and Peak Expiratory Flow rate, and/or by examining reported symptoms. When making a diagnosis based on symptoms alone, it is important that other potential causes of recurrent symptoms are excluded. A family history of asthma and/or allergies is also indicative and is usually part of the diagnosis.
Overall, it is difficult to diagnose asthma, especially in children, where objective clinical tests are difficult to perform. By nature, asthma is also a transient and reversible condition with symptoms that are non-specific and that are shared with other disease processes. The result is that the disease has been generally under-diagnosed and under-treated.

What causes asthma? Are there any theories for what may trigger asthma in children?

Hereditary factors are highly important in the pathogenesis of asthma and a family history of asthma and/or allergies may predict childhood asthma. However, the recent rapid increases in asthma’s incidence and prevalence, especially in the westernized world and in urbanized areas, cannot be explained by genetics alone.
Research has recently turned into studying the range of environmental and lifestyle factors that may cause asthma, especially in early life as the origins of the disease are thought to cluster in those years. The hygiene hypothesis is one key theory that was proposed to explain increases in asthma prevalence.
The hygiene hypothesis suggests that the recently increased cleanliness, reduced family size, urban (instead of rural and farm) living has led to a decrease in microbial exposure during early infancy, meaning a newborn’s immune system fails to mature properly. Then, when the immune system is confronted with allergens and/or other triggers in later life, it tends to overreact. This specific theory has been primarily linked to a specific kind of asthma: atopic asthma.
Other theories relate the increases in asthma prevalence to changes in our diets, especially the reduction in antioxidant intake and the reduced levels of maternal Vitamin D. Finally, and most relevant to my research, numerous environmental exposures were also found to modify the risk of asthma including the exposure to allergens, the exposure to parental and especially maternal tobacco smoke, and the exposure to indoor and outdoor air pollution. 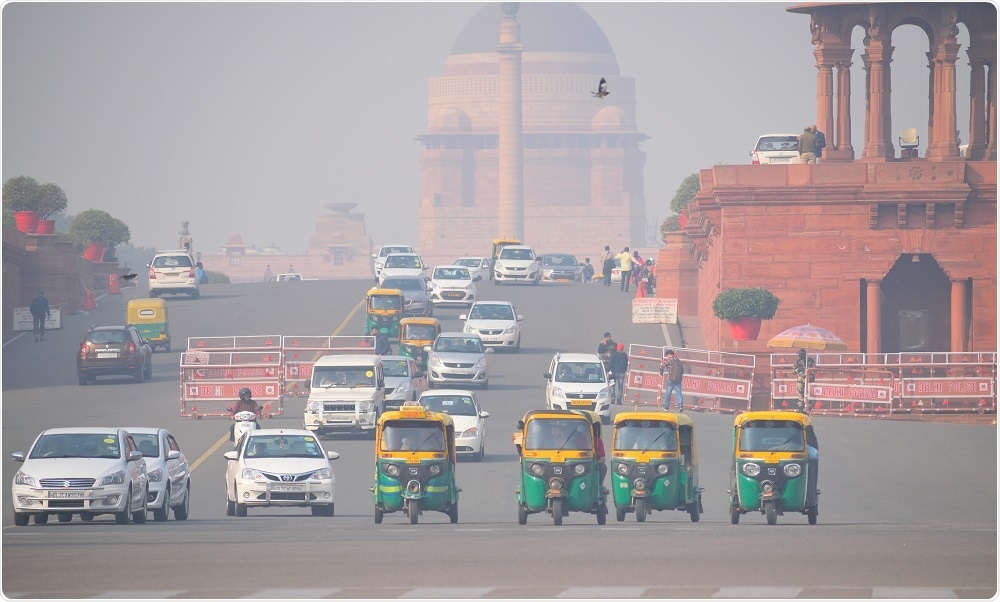 Please can you describe the model that you developed?

To quantify the burden of childhood asthma that can be specifically attributable to traffic-related air pollution, I developed a model that, in essence, knits together four different and distinctive models that have been developed independently.
The four models assessed the following:
I call this consecutive list of models and associated background analyses a “full-chain model”, as the final product was a single modeling suite that charted the full-chain of health impacts associated with road traffic.
The novelty of this model was that it could pinpoint the sources of air pollution and relate those specific sources to the health outcomes. This kind of analysis is very laborious and as such has been rarely done in the past, especially in the context of traffic-related air pollution and childhood asthma.
I validated the model and compared it to a standard model that is often used in similar studies. Overall, I found that it had good correlations with both measured data and results from the other model. The critical weakness of the model was that it tended to under-estimate traffic-related air pollution concentrations, especially in areas where the concentrations were highest. This under-estimation is a common issue in air pollution modelling that requires further work and development.
However, the key strength of the full-chain approach was the policy and practice relevance. This approach allows analyzing the environmental and health impacts of specific policy scenarios that are under or should be under consideration (for example, reducing or spatially/temporally shifting road traffic, changing proportions and operations of diesel versus petrol vehicles, heavy duty versus light duty vehicles etc.).
The current wall between the different disciplines and the chain’s steps is significant. Not only because it impairs explicit and specific policy scenario analysis and recommendation, but also because there are many steps and decisions to be made along this full-chain, or the parts of it, all of which have implications on the results, their validity and their utility. Therefore, the process of the full-chain modelling was as important to me as the final outcome.
It highlighted the uncertainties in current scientific knowledge and practice and shed light on open questions and potential for relevant advances that the scientific community can pursue further. Finally, other important advantages of the full-chain model approach can be realized in future research that assesses the environmental and health impacts of traffic and transport policy scenarios especially those policies that have a clear temporal or spatial element.

What changes could be made to reduce the amount of air pollution in towns and cities?

Fortunately, cities now have access to an increasingly wide range of policy measures that can reduce vehicle emissions, air pollution and human exposures. Think again of the full-chain above and one can start seeing how these policy measures can target the different elements of the chain.
For example, at the very first step of the chain is the source of the air pollution: road traffic. The reduction of road traffic generally results in a reduction in air pollution. Shifting trips made by the car/motor vehicle to trips made by cleaner modes of transport such as walking, cycling or public transit (provided that it is clean) can also reduce air pollution.
At the second step of the chain is the vehicle emissions, both exhaust and non-exhaust. Emissions can be reduced by switching to cleaner fuels, for example a switch away from diesel vehicles can go a long way in reducing NO2, NOx and black carbon emissions and subsequently air pollution concentrations and human exposures.
Further, to a certain extent, emission reduction technologies like diesel particle filters and exhaust after-treatment technology can mitigate traffic emissions, although these might have adverse unintended consequences. More strict emission standards and the scrappage of vehicles that do not meet those standards or banning those vehicles from entering urban cores where people congregate can help mitigate emissions and subsequently air pollution and human exposures.
At the third step of the chain is air pollution dispersion which can be somewhat modified by avoiding the trapping of air pollution in urban areas by for example street canyons where busy trafficked streets are flanked by buildings.
To reduce exposure to air pollution, sources of urban air pollution, mainly traffic and roadways, should be placed as far as possible from places where human exposures take place like residential areas, schools and kindergartens. Indeed, an unpleasant surprise that we had whilst surveying roads in Bradford, similarly to many other cities, was the proximity between highly trafficked roads, especially those with heavy good vehicles, and the hot spots for exposures, especially children’s schools and kindergartens.
Read the research paper by Dr. Khreis and her colleagues in The Journal of Transport and Health.
We previously catalogued a wide range of policy measures that urban areas can adopt, not only to reduce air pollution and improve health, but also to improve health through reducing exposure to other harmful environmental stressors such as traffic noise, the urban heat island effect and the lack of physical activity resulting from the over-reliance on motorized traffic.

I am expanding my burden of disease analyses to cover wider geographies including the Contiguous United Sates and the whole of Europe. I expect these results to be a powerful indicator of the real health burden of traffic-related air pollution that can hopefully give ground for policy change and health-promoting advocacy.
Find out more about the Born in Bradford study.
I’m conducting further research on the associations between traffic-related air pollution and the onset of childhood asthma, and its potential modification by ethnicity. I am doing so using very detailed health and demographic data sets from a well-established birth cohort study called Born in Bradford.
I’m further reaching out to scientists in other research areas to explore and ultimately integrate the toxicological, clinical, and epidemiological evidence across the different fields as to whether traffic-related air pollution can cause new cases of asthma that would not otherwise occur.
We are making good observations and progress in the fields of epidemiology and health impact assessment, but these observations need to be grounded in toxicological and clinical research that may shed light on the underlying mechanisms driving effects we observe. I believe this will be the way forward to advance the science and increase its utility and impact. 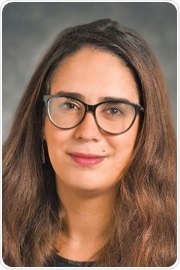 Dr. Haneen Khreis is a cross-disciplinary professional in the health impacts of transport planning and policy. She completed her doctoral studies working between the Leeds Institute for Transport Studies (ITS) and the Leeds Institute of Cardiovascular and Metabolic Medicine (LICAMM), in close collaboration with the Centre for Research in Environmental Epidemiology (CREAL) at the Barcelona’s Institute for Global Health (ISGlobal).
Dr. Khreis is currently an Assistant Research Scientist at the Texas A&M Transportation Institute (TTI) and the Center for Advancing Research in Transportation Emissions, Energy, and Health (CARTEEH). She remains an Associated Researcher with ISGlobal.
At CARTEEH, she leads the development of a cross-disciplinary curriculum on Transportation Emissions, Air Pollution, Exposures, and Health and leads a European and a USA-wide burden of disease assessment on traffic-related air pollution and childhood asthma.
Publicado por salud equitativa en 7:29