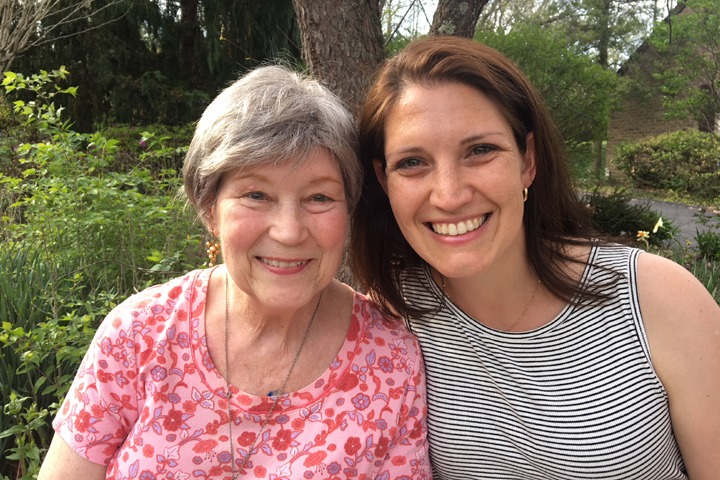 
FALLS CHURCH, Va. – While many women consider their mothers to be role models, Army Maj. Kaitlyn Perkins’ mother is particularly well-suited for the label. Perkins followed her mom’s path to nursing school, and then into the military. She’s juggling her career with parenting and a dual-service marriage, just like her mom did for 20 years. And Perkins, like her mother, has experienced the humbling honor of serving in a war zone.
Meet Perkins’ mom, retired Army Lt. Col. Phyllis Cogan. Cogan was a nursing student at Indiana University in the ’60s when military recruiters came to campus. She joined the Army after the service offered to pay for her final two years of college.
“I knew I’d probably wind up being sent to Vietnam,” Cogan said, “and I didn’t have a problem with that.”
She graduated in 1968, and after several months at Fort Bragg, North Carolina, received orders for Chu Lai to become a nurse with the 27th Mobile Army Surgical Hospital. She arrived in April 1969 for a one-year tour of duty.
“Overall, it was a very positive experience,” Cogan said. “When people ask me about it, I tell them that at times it was terribly unpleasant, and I still have bad memories. And I sometimes cry a little bit. But I’m a nurse. I didn’t think working in trauma care in wartime would be nice.”
After Vietnam, Cogan was stationed in San Francisco and then Germany. There, she met the Army communications officer who became her husband. They got married in 1973 and started having children – lots of them. Perkins is No. 5 out of 7. Perkins’ two older sisters also served as Army nurses for five years and four years, respectively.
“My mom shared some of her military nursing experiences with me when I was growing up, and they intrigued me,” Perkins said. “But at one point I fought it because I wanted to forge my own path, do something different.”
Then when she was in high school, Perkins’ younger brother got hurt while she was in charge. She sprang into care mode and whisked him to the hospital emergency room. “That experience was my adrenaline rush,” she said. “And it reassured me that yep, I want to do nursing. It’s in my blood. This is for me.”
Perkins received her bachelor’s degree in nursing 36 years after her mother. Her service has included two wartime deployments: Iraq and then Afghanistan. In Iraq for 15 months in 2006 and 2007, she was assigned to the 28th Combat Support Hospital in Baghdad.
“At that point, it was the busiest trauma hospital in the history of war,” Perkins said. “We could have 100-percent turnover in a day – 30 patients in, 30 patients out – for different multiple mass casualty events including chemical warfare and mortar attacks. It was a lot. It helped to remember my mom telling me how fortunate nurses are to be a witness and a support to people during their most vulnerable moments.”
Like her mother, Perkins was assigned to Germany. She, too, met her husband, an Army armor officer, when they both served there. They were married in 2012 and have two children, ages 4 and 2.
“The best parenting advice my mom ever gave me was to not brush off my 2-year-old’s insistence on sitting on my lap when I was busy doing something else,” Perkins recalled. “She said, ‘You never know when it’s the last time your child will ask to do that.’”
One way Cogan’s and Perkins’ paths have diverged has been nursing specialty. Cogan spent her entire career as what she calls a bedside nurse – hands-on patient care. Her daughter is currently a full-time student through the Army Congressional Fellowship Program. She’ll receive a master’s degree in legislative affairs and will focus on health care policy.
“The main thing I told Kaitlyn was that if you become a nurse, you have a lot of options,” Cogan said, adding that she was passed over for lieutenant colonel the first time because she didn’t have an advanced degree.
“I had just made major when I was asked when I was going to get my master’s degree because without it, I wouldn’t get promoted any further,” Cogan recalled. “And I said, ‘Well, let’s see. I have a husband, six children, and a full-time job. I don’t know that [getting a master’s degree] is going to happen.’ ”
Cogan did make lieutenant colonel, then decided to retire when her husband got transfer orders. The couple’s seventh child was born a few years into her military retirement. He’s now an Army captain in military intelligence.
“Starting out, I didn’t really intend to make the Army a career,” Cogan said. “But I really enjoyed caring for the soldiers and their families. And the military really pushed you because they had confidence in you. I’m the kind of personality that does better if you push me a little bit.”
Says her daughter: “I’ve been doing this for 14 years now, and I’m loving it. The glass ceiling doesn’t exist in the Nurse Corps.”
Publicado por salud equitativa en 8:36