Getting tested for STIs is an 'important part of sexual health' | Health.mil

Getting tested for STIs is an 'important part of sexual health' | Health.mil

Getting tested for STIs is an 'important part of sexual health' 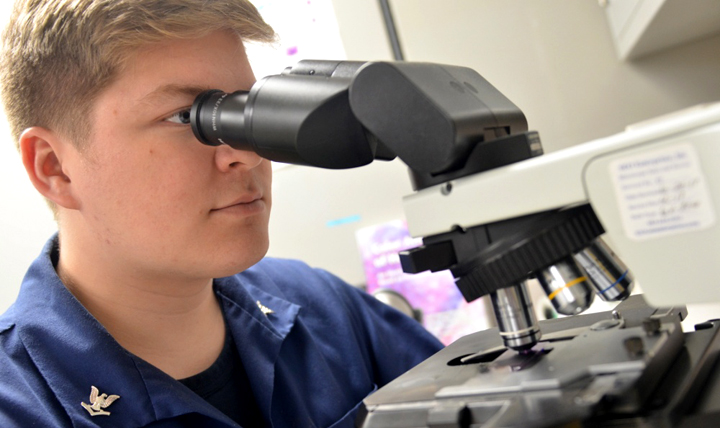 
FALLS CHURCH, Va. — Some may feel itching, burning, or pain, while others see physical signs. But more often than not, two of the most common sexually transmitted infections or STIs – chlamydia and gonorrhea – are ignored because of a lack of symptoms. Military Health System experts encourage men and women to take steps to ensure their health and prevent these infections.
“Many sexually transmitted infections do not have any symptoms, so getting tested regularly is an important part of sexual health,” said Rolando C. Diaz, epidemiology technician at Fort Belvoir Community Hospital in Northern Virginia.
According to the Centers for Disease Control and Prevention, more than 2 million cases of the most reported STIs – chlamydia, gonorrhea, and syphilis – were reported in the United States in 2016. Those are the highest numbers ever recorded, the CDC said. These three conditions can be spread through vaginal, anal, or oral sex with an infected person, and can cause infection in the genitals, rectum, and throat.
“If you have had new partners or unprotected intercourse, or develop symptoms, talk to your provider about your concerns and exposures to help them order the correct tests to keep you and your sexual partner(s) healthy and safe,” said Diaz.
Commonly known as sexually transmitted diseases, most conditions are now referred to as sexually transmitted infections. Catherine A. Gangaas, a public health nurse at Fort Belvoir, said this term helps providers prevent further spread of the STI by looking for the cause of the infection, rather than just treating the disease.
“The change in terms came about when it was recognized that people could be infected and transmit the infection to others without ever developing symptoms or disease,” said Gangaas. It’s now recommended that women get tested every year during their annual exam rather than waiting for symptoms to appear, she said.
The September 2017 Medical Surveillance Monthly Report, or MSMR, said incidence rates of chlamydia and gonorrhea were highest among service members younger than 25. The report said STIs rates, with the exception of syphilis, were higher among women than men. According to the report, rates of gonorrhea decreased among female service members in 2016, but slightly increased among males. The rates of diagnosis for chlamydia among women were generally three to five times those among men.
The CDC said women can have a greater risk for an infection because the lining of the vagina is thin and delicate, making it vulnerable to bacteria and viruses. Women are also less likely to have symptoms for chlamydia and gonorrhea than men. If symptoms do occur, they can go away even if the infection remains.
Men can experience a burning sensation while urinating; painful or swollen testicles; and white, yellow, or green discharge. Symptoms in women, which are similar to those of a yeast infection, include increased vaginal discharge and a painful or burning sensation while urinating. Bleeding between periods can also be an indication of gonorrhea in women.
Gangaas said gonorrhea and chlamydia are often tested for together as they are often transferred together. These conditions are especially common among teenagers and young adults. It’s estimated that one in 20 sexually active young women 14-24 years old has chlamydia, said Diaz.
Both conditions are treated with antibiotics prescribed by a health care provider. Patients going through treatment are encouraged to refrain from sex because they can still infect others even during treatment, said Diaz.
“It takes seven days for the medication to treat these infections and only after this time is the chance of infecting others gone,” said Diaz, adding that the treatment won’t work if someone is re-exposed to chlamydia or gonorrhea and reinfected within that time. Using a condom during the treatment period can help lower risk of partners reinfecting each other – but there is no guarantee, he said.
People who have completed treatment for chlamydia or gonorrhea can also be re-infected, said Gangsaas. Lifestyle choices, such as not being in a mutually monogamous sexual relationship and not using condoms correctly 100 percent of the time, can increase risk for having an STI.
“Make sure you complete all medication prescribed by your health care provider, and ensure that your sex partner is both tested and treated,” said Gangaas. “It is important to be retested no sooner than three weeks after completing your medication to ensure that you are clear of the infection.”
If left untreated, gonorrhea and chlamydia can have serious consequences, including infertility or risk of being passed from a mother to a baby during pregnancy and delivery. When this occurs, the CDC said babies are at risk for still birth, low birth weight, brain damage, blindness, and deafness.
While rates of chlamydia and gonorrhea have increased among service members in recent years, the MSMR report found rates of human papillomavirus infections have decreased. If an HPV infection persists, it can cause genital warts or various types of cancer, including cervical cancer. Nearly 14 million new cases of HPV infections occur every year, but a vaccine is available to help reduce risk of an infection.
“Being informed about sexually transmitted infections is essential for a healthy sex life,” said Diaz. “For our patient population, this means knowing what they can do to stay safe and healthy, and how to directly ask their health care provider about testing.”

Ready, set, focus: Finding calm in a storm through the power of breathing

Deep vein thrombosis: What you need to know

Eat an apple a day, but don't keep the dentist away

The instructional podcasts highlight health technology and offer tips, tools and techniques to help improve the lives of those in the military community
Recommended Content:
Preventive Health | Sleep | Mental Wellness

Pediatric care in the military rated 'excellent' but can improve

Focus on prevention … not the cure for heart disease

‘Kissing disease’ exhausting, but it strikes only once

The fight against cervical cancer

Learn about two weapons that can stop this cancer in its tracks
Recommended Content:
Women's Health