From Clipping Scissors to Word Processor 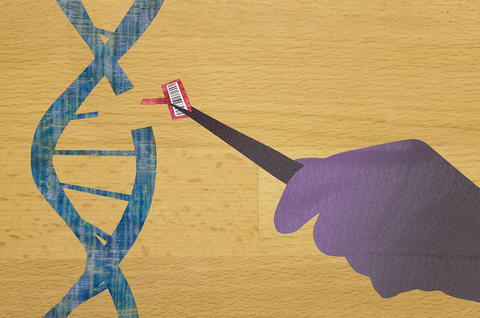 Using the gene-editing tool CRISPR to snip at DNA is often akin to using scissors to edit a newspaper article. You can cut out words, but it’s difficult to remove individual letters or instantly know how the cuts affect the meaning of the text. Someday, CRISPR could be used to “clip” disease-causing genetic mutations in patients. But such precision medicine is impossible so long as CRISPR remains a clumsy tool.
In work that will help make the gene-editing process more precise, researchers at the Joint Institute of Metrology and Biology (JIMB, a collaboration between Stanford University and the National Institute of Standards and Technology, or NIST), have developed a new kind of CRISPR platform called MAGESTIC. Taking its name from the phrase “multiplexed accurate genome editing with short, trackable, integrated cellular barcodes,” the new platform makes CRISPR less like a blunt cutting tool and more like a word processor by enabling an efficient “search and replace” function for genetic material.