For many nurses, saving lives means risking their own | Health.mil

For many nurses, saving lives means risking their own | Health.mil

For many nurses, saving lives means risking their own 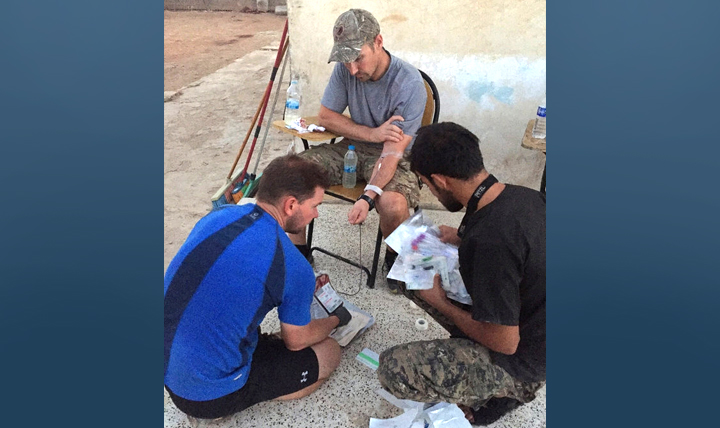 
Murses in the Military Health System understand that providing care may mean risking their own lives. On July 10, 2007, Army Capt. Maria Ortiz died in Iraq, marking the first time since the Vietnam War a military nurse had been killed in combat.
Ortiz died from wounds sustained during a mortar attack on the compound in Baghdad where the 3rd Medical Command’s 28th Combat Support Hospital was located. Ortiz and another nurse who survived were returning from physical training when the attack occurred.
“She was such a phenomenal person, and a phenomenal leader,” said Army Maj. Kaitlyn Perkins. Then a lieutenant two years out of nursing school, Perkins reported to Ortiz during the 10 months they were deployed together. Perkins served an additional four months in Iraq before returning home.
“She saw my potential,” said Perkins, who also deployed to Afghanistan from June 2011 to June 2012 and served as a brigade nurse for the 172nd Infantry. “She would teach you, she would guide you, she would mentor you, she would challenge you.”
Air Force Maj. Cade Reedy is a critical care nurse assigned to a Special Operations Surgical Team, or SOST. Each SOST consists of a critical care nurse, a nurse anesthetist or an anesthesiologist, a general surgeon, surgical technician, emergency physician, and respiratory therapist. Assigned to the 24th Operations Wing at Hurlburt Field in Florida, SOSTs support Special Operations Forces worldwide.
“SOST members are trained to seamlessly provide life-saving surgical care and trauma resuscitation on or near the battlefield,” Reedy said. “We close the gap between the front lines and conventional medical care. That kind of work really makes you adapt and improvise – and stresses the importance of teamwork.”
Reedy was one of six SOST members awarded the Bronze Star while deployed in 2016 in support of Operation Inherent Resolve. According to the award citation, the team worked tirelessly to treat 750 patients, respond to 19 mass-casualty events, conduct 16 life-saving surgeries, and assist victims of a chemical attack.
In one case, Reedy donated his own blood to save the life of a local man severely wounded while fighting enemy forces.
“We hadn’t been in that location very long, so we had a minimal blood supply,” Reedy recalled. While the surgeon began operating to repair the man’s lung injury, Reedy started a walking blood bank. He managed to collect five units of the necessary blood type, but it wasn’t enough.
“So we drew a unit of blood from me,” Reedy said. “With that last unit, we were able to stabilize the patient and transfer him to a local hospital. Ten days later, that patient walked into our casualty collection point with his brother and thanked us for saving his life.”
Reedy has deployed three times in support of Operation Inherent Resolve and Operation Enduring Freedom. “I’ve always enjoyed fast-pace and high-adrenaline activities,” he said.
His military career began in 1996 when he enlisted in the Army after high school. He served as an infantryman in the 1st Ranger Battalion and cross-trained as a medic. He served for four years and then left the Army to earn a bachelor’s degree in nursing. He was commissioned into the Air Force in 2011.
Serving in harm’s way can happen at home as well. U.S. Public Health Service officers – who fall under the Department of Health and Human Services – can serve in more than 20 federal organizations, such as the Departments of Defense, Homeland Security and Justice, which includes the Bureau of Prisons. Capt. Heather Bonsell served as a staff nurse from February 2008 to April 2010 at the United States Penitentiary, Hazelton, a high-security federal prison for men in West Virginia. The prison had a reputation of housing “the worst of the worst inmates,” Bonsell said.
“I wore a stab-resistant vest to work every day,” she said. “I had to deal with a lot of emergency situations. It wasn’t necessarily a great experience, but I learned a lot about myself.”
Publicado por salud equitativa en 14:14