Breaking down the image: Mental health 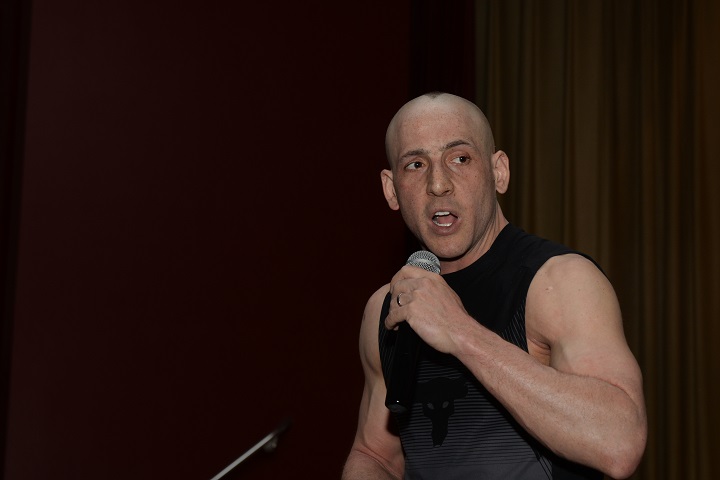 Kevin Hines, a suicide survivor and activist for suicide prevention, speaks to Airmen assigned to the 28th Bomb Wing about his story at Ellsworth Air Force Base, South Dakota. Hines is one of 36 people to survive a suicide attempt by jumping off the Golden Gate Bridge, San Francisco, California. (U.S. Air Force photo by Airman 1st Class Nicolas Z. Erwin)


ELLSWORTH AIR FORCE BASE, S.D. — Life in the military can be stressful for anyone from an Airman to a general officer. Fortunately, the 28th Medical Group Mental Health Clinic provides services for Airmen in need.
“Our primary mission is to return Airmen to their jobs and back into the fight,” said Air Force Airman 1st Class Bradley Borytsky, a 28th Medical Operations Squadron mental health technician. “We want to make sure that [Airmen] are functioning at full capacity and handle whatever life throws at them with healthy coping mechanisms.”
The 28th Bomb Wing has begun teams to help build a support network between Airmen and the chaplain team and mental health clinic. 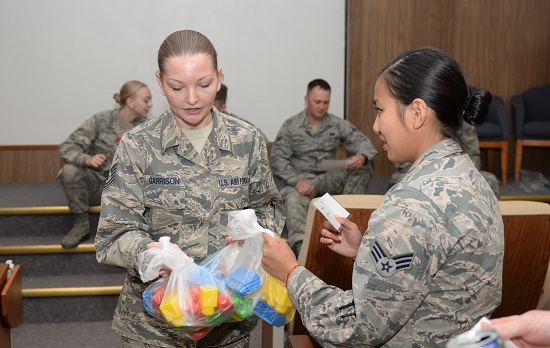 Air Force Tech. Sgt. Jennifer Garrison, 28th Medical Operations Squadron noncommissioned officer in charge of the mental health clinic, gives building blocks to an Airman during a team building exercise with the human performance team to bring awareness to the value of having positive coping mechanisms during stressful situations at Ellsworth Air Force Base, South Dakota. Mental health is one of the four pillars of Comprehensive Airman Fitness, and is recognized in May as National Mental Health Awareness Month. (U.S. Air Force photo by Airman 1st Class Nicolas Z. Erwin)
“One of the things we have recently started is implementing human performance teams in collaboration with the chaplains and other helping agencies,” said Air Force Capt. Timothy Naill, 28th Medical Group Family Advocacy Officer. “We want to build relationships with Airmen in their units… it’s really getting people to see that we are on their team.”
May has been National Mental Health Month since 1949, bringing awareness and educating the public about mental illness. In the military, there are misconceptions of what the mental health clinic does.
“First off, people think [getting help for mental illness] will ruin their career,” said Air Force Tech. Sgt. Jennifer Garrison, 28th MDOS noncommissioned officer in charge of the mental health clinic. “They think they have no privacy because their commanders and first sergeants are privy to their information. That isn’t true.”
Garrison explained that although commanders and first sergeants are given limited information when it relates to harm to self, harm to others or mission impact, generally, what Airmen disclose to their provider and the specific details they have are not given to their commanders.
Naill elaborated on how the misconception of going to mental health will ruin a career is wrong. He explained that the earlier someone gets help, the more manageable their situation will be. Airmen need to know there is support out there to help cope with whatever is happening in their lives.
“We come from a variety of different backgrounds,” Naill said. “We all have different upbringings. The mental health clinic teaches skills that someone may not have learned at other times in their lives.”
These skills improve the overall well-being of an Airman’s mental state, one portion of being ready to win the fight. A general outline of an Airman’s health falls into the categories of Comprehensive Airman Fitness.
This model includes pillars that represent the physical, spiritual, social and mental portions of one’s readiness. The health of each of these pillars have a tremendous impact on how an Airman performs.
“How someone explained mental health to me was by comparing it to spraining an ankle,” Borytsky said. “When you’re running and sprain your ankle, people don’t expect you to be ready to run a mile-and-a-half. Your mental health is the same. You shouldn’t be expected to be at your best after something traumatic happens.”
Getting mental health care is important as demonstrated by Kevin Hines, one of 36 people to survive a suicide attempt by jumping off the Golden Gate Bridge, San Francisco, California. Mr. Hines was invited by the base community action team to help bring awareness of avenues for Airmen to find support at Ellsworth Air Force Base.
“If you are out there in the military, and you are hiding and silencing your pain, I need you to do yourself a favor and tell your truth to someone who can help,” Hines explained.
He described how getting help is a daily occurrence and how important it is to have people who support you and empathize with any situation happening.
Getting help may have a stigma associated within the Air Force. The 2018 theme being promoted for National Mental Health Month is “#CureStigma.” Stigmas tend to create an environment of shame, fear and silence that prevents many people from seeking help and treatment, according to the National Alliance on Mental Illness.
“The stigma is starting to fade,” Garrison said. “In the more recent years, we have seen a tremendous amount of people starting to visit. That’s always a good sign.”
Disclaimer: Re-published content may have been edited for length and clarity. Read original post.
Publicado por salud equitativa en 8:50