By P Surat, PhD
Bioprinting involves the use of 3D printing technology to build tissues and organs. 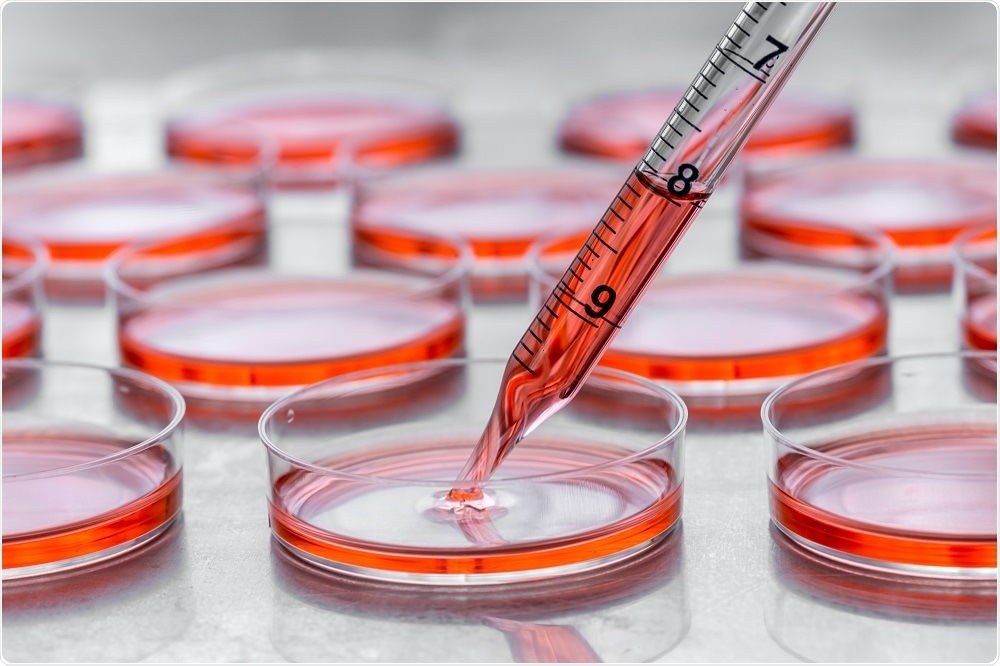 Credit: Hakat/Shutterstock.com
The first step of bioprinting is to create a model of the organ using biopsy samples, CT scan, and MRI. Then, a mixture of cell and nutrients (also called as bioink) are added to the scaffold in a layer-by-layer approach to generate tissue-like structures.
Bioprinting precisely places cells, proteins, DNA, drug particles, growth factors and biologically active particles spatially to guide tissue generation and formation. It has been applied to several fields of study, including tissue engineering and regenerative medicine, transplantation and clinics, drug screening and high-throughput assays, and cancer research.

Bioprinting of functional organs is a challenging task as it requires connection to vascular network of arteries, veins, and capillaries; incorporation of various cell types to form complex tissue architecture; mechanical and structural integrity.
Despite these constraints, several tissues which are thin or hollow such as blood vessels and tissues that do not require vasculature such as cartilage have been successfully bioprinted. To generate bioprinted heart tissue, tissue spheroids of human vascular endothelial cells (HUVECs) and cardiac cells were generated.
After bioprinting, tissue spheroids were fused to form a single synchronously beating cardiac tissue patch. However, further efforts are required to tissue engineer such a structurally and functionally complicated organ. Tissue engineering of cartilage tissue requires precise spatial and temporal deposition of cells and biomaterials with sophisticated patterns.
Although great progress has been made to bioprint stratified articular cartilage tissues using stem-cell differentiated chondrocytes, creating cartilages with different structural, biomechanical and biological properties is still a challenge and work in progress.
Another important area in the field of tissue engineering is creating heart valves, as they do not possess regeneration capability and need to be replaced by mechanical or biological prosthetic counterparts if damaged. Studies have shown that anatomically accurate axisymmetric aortic valve geometries can be bioprinted.
Similar studies have been undertaken in liver, lung, pancreas, brain, and skin tissues. In several cases, engineered tissue organoids have been generated; however, further research is required to create a mechanically stable and vascularly connected three-dimensional structure.

Several bioprinted tissue types, including nerve, cardiac, blood vessel, bone and skin, have been transplanted into animals to study their functionality within a host. Such studies have not been performed in humans yet due to lack of FDA approvals.
However, 3D-printed plastic, ceramic or metallic implants for bone tissue replacement have been successfully performed. No adverse effects were observed after the surgery. The challenges to transplant bioprinted tissue and organs involve replicating the vasculature and metabolic state of the organ.
One of the alternatives to this problem could be in situ bioprinting of tissue and organ constructs directly into the defect sites rather bioprinting entire tissue outside, maturating and testing them in vitro before transplanting.  Bioprinting the tissue in situ can lead to recruitment of endothelial cells and incorporation in to the host vasculature.

Drug discovery involves testing large number of candidate molecules which requires a huge investment of money and human resources. 3D bioprinted tissue models can assist in testing the efficacy of the candidate drugs as they closely mimic the native tissue and can be created in a high-throughput manner by fabrication in microarrays.
Bioprinted tissues can be controlled for their size and microarchitecture, high-throughput capability, co-culture ability, and possesses low-risk of cross-contamination. For example, bioprinted liver micro-organ model has been used to test drug metabolism.

The main drawback of two-dimensional tumor models is that they do not represent physiologically relevant environment as they lack three-dimensional interactions with neighboring cells and substrates. Thus, bioprinting offers a mode to understand cellular interactions in three-dimensions to make clinically relevant observations on cancer pathogenesis and metastasis.
For example, human ovarian cancer (OVCAR-5) cells and MRC-5 fibroblasts were bioprinted using an inkjet-based bioprinting platform. Additionally, scaffold-free bioprinting of a breast cancer model has been shown where cancer cells are surrounded by a physiologically relevant stromal milieu comprising MSC-differentiated adipose cells, mammary fibroblasts, and endothelial cells.
These tissues were viable for 2 weeks in vitro with clear compartmentalization of different tissue types. This model was then used to study the effect of different chemotherapy drugs, including tamoxifen.
Reviewed by Hannah Simmons