By Rebecca Woolley, BA, BSc
The hygiene hypothesis proposes that a lack of exposure to microbial organisms (microbes, or “germs”) in a child’s early years contributes to the development of asthma and allergic diseases. 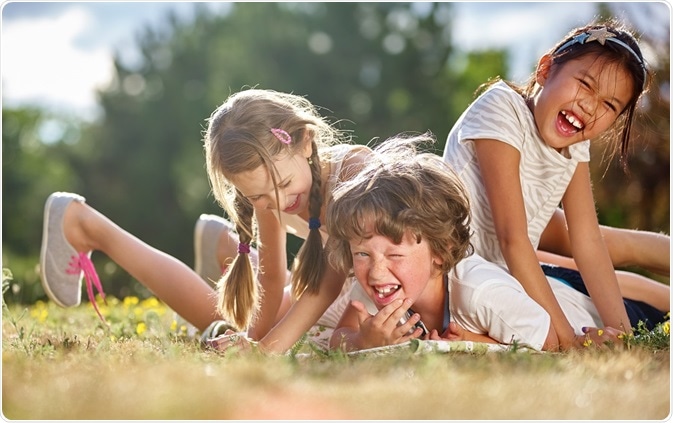 Credit: Robert Kneschke/Shutterstock.com
Repeated exposure to microbes is thought to help the immune system learn to distinguish harmless foreign organisms from the harmful. Without it, the immune system does not develop the capacity to defend itself from microbes that cause or trigger diseases, such as asthma.
This idea is particularly relevant today, with our growing fixation on germs and sanitation (warranted or not). Could increased efforts to protect our health actually be hindering the body from establishing its own natural defences?
Asthma is a diverse disease that arises from a combination of environmental and genetic factors. With varying disease presentations and incidence rates throughout the world, it is doubtful that the hygiene hypothesis can fully explain all manifestations of the disease.
However, considerable evidence suggests that it may be a contributing factor to the occurrence and severity of asthma, particularly in developed countries.

Lending support to the hygiene hypothesis is the fact that an increase in asthma incidence has commonly been observed in homes with low levels of lipopolysaccharide (LPS), a bacterial protein. This protein activates the TLR4 receptor on immune cells and helps them to recognize foreign pathogens.
Helminth infections, commonly contracted in early childhood, are also protective against respiratory sensitivity. The mechanisms by which this exposure improves the immune response to pathogens is probably due to the production of a range of small molecules (e.g., proteins, polysaccharides, and lipids) by microbes that teach the immune system to regulate certain allergic immune responses through innate-adaptive pathways.
In contradiction to this, however, is research on the respiratory syncytial virus (RSV). This is often the first pathogenic virus encountered by infants, and it has been shown that contracting RSV pneumonia puts a child at increased risk of developing childhood asthma.
The F protein found on RSV triggers the same response as bacterial LPS. Unlike LPS, however, RSV does not prompt the immune system to defend itself. Instead, it stimulates the release of interferons, which suppresses the T-cell immune response. In this sense, exposure to RSV may actually cause asthma, rather than prevent it.

Effect of the microbiome on asthma

Before birth, the foetal immune system is suppressed (to prevent it from rejecting maternal material) but it remains protected by the mother’s antibodies. After birth, it needs to build its own protective mechanisms.

There is growing interest on how organisms that reside naturally in the body influence human health, particularly within the gut. In the first few years of life, the development of this microbiome is affected by numerous nutritional and environmental factors, including milk consumption, fibre intake, and sensitivity to antibiotics.
Once established, however, the variety of organisms that make up the microbiome is thought to influence the health of the host, extending far beyond the gut: from the mind to the immune system.
Disruption to the balance of microbes can lead to several immune and metabolic diseases, including: inflammatory bowel disease, allergies, cancer, heart disorders, and some neurological disorders. Links have been found between asthma risk and microbial imbalance in both the gut and lung microbiomes.
An increased risk of asthma has also been observed when a child receives antibiotics in their early years. This lends support to the emerging view that antibiotics disrupt the balance, and natural benefits, of a patient’s microbiome.

Within the home, no association has been found between hygiene/general cleanliness and asthma. Consequently, the hygiene hypothesis cannot dispute the fact that cleanliness continues to be a proven method of preventing transmission of infections between people, objects and animals.
However, increased exposure to bacterial endotoxins, particularly in the first year of life, decreases allergic sensitivity and asthma in school-age children. Exposure to cockroach, mouse, and cat allergens, as well as a diverse house-dust microbiome (particularly including Firmicutes and Bacteroidetes phyla) in a child’s first year have protective effects up to 3 years of age.
Less vs. more hygienic practices that may protect against asthma and allergies:
While lending support to the hygiene hypothesis, a number of factors could explain the benefits of each situation beyond the increase in microbial exposure. A farm-like environment and the abundance of microbes therein may help a developing immune system to build tolerance to foreign organisms.
However, an increased incidence of asthma in urban settings can also be explained by the influence of a multitude of other environmental triggers, e.g. pollution, human-to-human disease transmission, increased fast food consumption and a reduced intake of fruit and vegetables. Without the ability to control for confounding influences, it is difficult to form full conclusions from these observational studies

Proving the hygiene hypothesis unequivocally is still a work in progress.  Developed countries have experienced a rapid increase in allergenic diseases such as hay fever, eczema and food allergies, in addition to asthma. With asthma being one of the most common chronic diseases in the developed world, understanding how it develops, and how it can be prevented, is paramount.
Reviewed by Hannah Simmons, BSc.