By Liji Thomas, MD
Oxytocin is a small but potent nine-amino acid hormone secreted within the brain, from the hypothalamus. It is secreted into the posterior pituitary via the pituitary stalk which contains axons projecting from the hypothalamic neuroendocrine cells, and is finally released from the nerve terminals in response to appropriate and varied stimuli.
It was Dale who first discovered that posterior pituitary extract caused the uterus to contract, in 1906. The same preparation was found to also cause milk ejection. Oxytocin has the distinction of being the first ever peptide hormone to have its amino acid sequence identified and synthesized in the lab by du Vigneaud, which earned him the Nobel Prize in 1955. 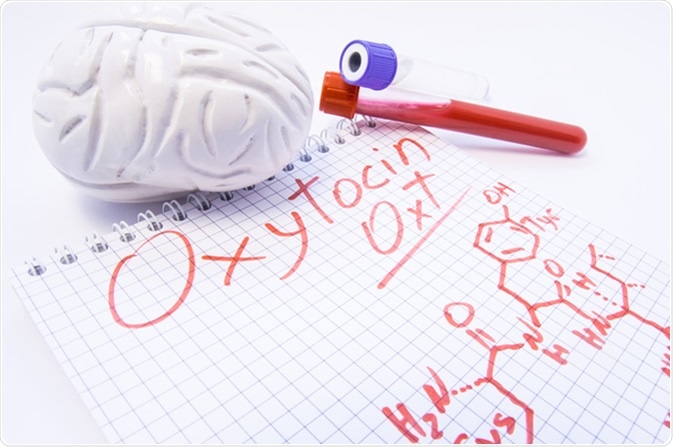 Oxytocin plays an essential role in a variety of physiological processes that are active during interpersonal contact and in sexual reproduction. These include:
In contrast to these is the other face of oxytocin, namely, its tendency to increase feelings of trust and empathy towards ‘likes’, which promotes exclusivity, and feelings of rejection towards those who are ‘unlike’.

Oxytocin release is stimulated during labor, and its effect on the pregnant uterus was its principal feature when first discovered, accounting for its name (literally “swift birth”).
Oxytocin levels also rise markedly when the nipples are stimulated, which is why cows have their udders washed before they are milked, whether by hand or by machine. In the absence of this stimulation, there is poor milk ejection or ‘milk letdown’, with very little milk being secreted.
Regarding sexual activity, oxytocin has a big part to play in penile erections, but also induces feelings of wanting to cuddle or having physical affectionate contact. Oxytocin is also involved in the pleasurable feelings of sexual climax in women and in men, with increased pulses being observed during orgasm, erection and ejaculation. It acts on penile erectile tissues, and stimulates ejaculation by promoting sperm transport, and acts on tissues in the prostatic urethra, bladder neck and the ejaculatory duct which result in expulsion of the semen. Vasopressin VIa receptors are involved in this, which is thought to point towards a role in the treatment of premature ejaculation and therefore of male infertility.

Experiments in sheep showed that disruption of oxytocin binding to its receptor prevented an ewe from showing maternal behavior towards her own lamb, while administration of oxytocin into the cerebrospinal fluid caused even a virgin ewe to behave maternally towards other lambs.
Oxytocin may also be a component of normal bone formation and unregulated cellular proliferation (for instance, within the prostate, directly as well as by the mediation of testosterone), as well as in the differentiation of the heart and in blood sugar regulation.

Again, it is involved in bonding between individuals a species, binding with receptors in some parts of the brain to produce feelings of happiness and trust, even, remarkably enough, in strangers as proved by one experiment on humans. It plays a role in attachment to another individual, in mating and parental behavior, as well as in behavioral disorders such as obsessive-compulsive disorder and autism spectrum disorders.
Oxytocin is also found to increase in individuals who are experiencing infatuation for another person.
Oxytocin levels are lower than normal in autism spectrum disorders, but intravenous oxytocin was associated with improvement in repetitive activity in these individuals, as well as in helping them understand the emotional component of speech, which is markedly missing in this group.
Again, oxytocin when given to rodents who were addicted to drugs such as heroin or cocaine reduced their craving and withdrawal symptoms, and even reduced craving for sugar., This prompts more research into its possible utility in helping obese individuals to lose weight and control addictions.
Oxytocin also reduces anxiety. Another related effect is its lowering of cortisol effects, thus lowering stress and increasing healing within the body.
The effects of oxytocin on behavior are because of neurons which end on the areas of the brain such as the amygdala, brainstem and ventromedial parts of the hypothalamus, rather than on the pituitary gland. The uterine and mammary gland actions require high-affinity receptors on these target actions.

Oxytocin is used to stimulate uterine contractions during labor and delivery, either strengthening them when weak or inefficient, or inducing labor pains when required. Its actions are most effective at term when the number of oxytocin receptors is sufficient. Oxytocin is also important in the active management of the third stage of labor in promoting proper uterine contractions after expulsion of the fetus, promoting control of bleeding.
The potential for oxytocin and its analogs is only beginning to be understood. H owever, much more research is required to unlock its role in the therapy of many physical and psychological maladaptations, such as diabetes, autism, male sexuality disorders, and osteoporosis.
Reviewed by Gillian D’Souza, MSc