By Dr Ananya Mandal, MD,March 25, 2018
Busy urban lives mean little time for regular physical activity and exercise. A new study has found that short bursts of exercise, if they add up to the total required exercise during the week, can reduce the risk of death. The study was published in the latest issue of the Journal of the American Heart Association. 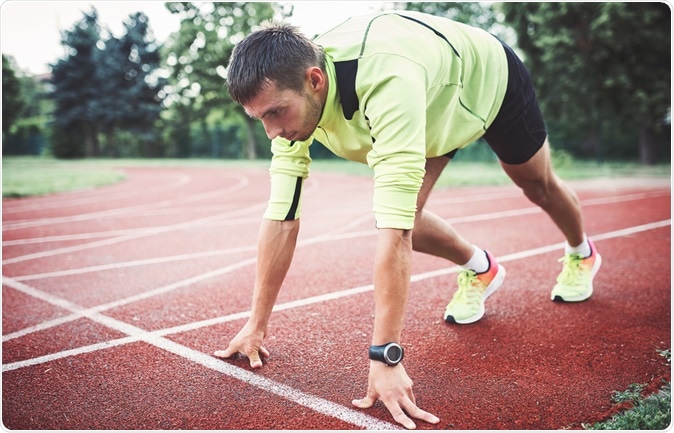 Image Credit: Bobex-73 / Shutterstock
The study comes from a team of researchers at the National Cancer Institute and Duke University. From the former university, researchers Pedro Saint‐Maurice, Richard Troiano, and Charles Matthews took part in the study while from the latter university, William Kraus was part of the study. Their study compared one concentrated stretch of exercise during the day with short bursts of exercise all throughout the day. They noted that keeping the heart rates up for around five to ten minutes each time was all that was necessary for benefit of exercise to be obtained.
For this study, the team of researchers looked at data from 4,840 American adults who were part of the National Health and Nutrition Examination Survey (NHNES) between 2003 and 2006. The participants were given devices called accelerometers to be worn on their person for a week. They used ActiGraph AM-7164 for the participants. This would tract their activity throughout the day. The device could tell the team the amount of moderate to vigorous exercise that a person was getting during the study period.
Moderate physical activity as recommended by the American Heart Association includes brisk walking (at at least 3 miles per hour or more speed), cycling slower than 10 miles an hour, doubles tennis, gardening, aerobics etc. From this study the researchers measured the total minutes that the adults spent in moderate-to-vigorous physical activity, number of bouts or bursts of activity that lasted for 5 minutes or more and bouts that lasted 10 minutes or more. They followed up the population for 6.6 years and noted that there were 700 deaths during this time. An association between regular physical activity and death was assessed from the information gathered.

Results revealed that those who got at least 30 minutes of moderate-to-vigorous physical activity daily were at one third or less risk of dying during the study period when compared to those who did not get any physical activity. Individuals who were more active with 60 to 99 minutes activity per day were half as likely to die compared to those who worked out less. Similarly the risk of death was around 75 percent lower among those who partook in at least 100 minutes of daily moderate to vigorous activity. The duration of exercise could be at a stretch or in short bursts.
The study researchers caution that the results need to be interpreted with caution. The associations of cause-and effect are not proven by this study. They add that the participants could be having other lifestyle behaviors like smoking, unhealthy diet etc that were not taken into account in this study. Further the risk of death rises with several other factors including accidental deaths, deaths due to stress, poor health, genetic predispositions, lack of access to adequate healthcare etc.
Current guidelines, recommended by the U.S. Department of Health and Human Services, suggest all adults to work out for at least 150 minutes of moderate-intensity aerobic physical activity per week. The guidelines recommend at least 10 minutes of activity as shorter durations do not seem to provide similar health benefits. Study author William E. Kraus, from Duke University says their study refutes this “10 minutes” recommendation. He added that taking the stairs was recommended but it is an activity that may take less than 10 minutes. So the bottom line of the study however remains the fact that people should be working out more than and as frequently as possible to reduce their risk of death.
Source:
http://jaha.ahajournals.org/content/7/6/e007678
Publicado por salud equitativa en 8:31