Making the case for African investment in research 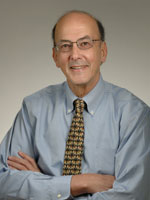 Sometimes we in the global health research community struggle to translate our achievements into economic terms. I was particularly struck by this during a recent meeting in Africa of public and academic leaders, where we discussed how best to make the case for increased investments in scientific capacity building and research ventures across the continent.
How do you calculate the value of lives that were not lost because vaccines or treatments were available? How do you measure workforce productivity gained because fewer days were missed due to malaria or other illnesses because qualified health professionals properly diagnosed and treated the disease? How do you accurately measure the impact of scientific training, as well as research and development (R&D) investment on national economic growth in individual African nations?
These questions are on our minds now, given the African Union nations' pledge to devote 1 percent of its Gross Domestic Product to R&D. Although Africa is home to 15 percent of the world's population and carries one-quarter of the world's disease burden, it accounts for just 1.3 percent of global investment for research. An increased focus on science education and research training could pay enormous dividends that would fuel the continent's economic engine, while also generating discoveries that improve health. 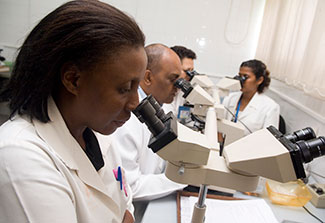 Photo by Richard Lord for Fogarty/NIH
An increased focus on science education and research
training could pay enormous dividends that would fuel Africa's
economic engine, while also generating discoveries that
improve health.
To advance this notion, we've been working with partners to form a new body, called the Coalition for African Research and Innovation (CARI), aimed at accelerating scientific breakthroughs in Africa. We've reached consensus on a three-pronged strategy for CARI - to encourage increased investment in African R&D, catalyze partnerships with common aims and scientific objectives, and gather evidence to build demand for research among African governments.
We envision CARI as an African-based organization with a governance structure comprised of diverse African leadership. It's being led by the president of Mauritius, Dr. Ameenah Gurib-Fakim, an accomplished chemist and biodiversity scientist. In addition to NIH, CARI's founding partners include the African Academy of Sciences (AAS), the Bill and Melinda Gates Foundation, and the Wellcome Trust. Consultations have already been held with representatives from the World Bank, African Development Bank, the African Union and others. The AAS is serving as the Executive Secretariat during the initial incubation period.
Health research has been selected as the initial focus for a scalable pilot, with future endeavors expanding into other scientific domains. One project might focus on establishing a precision medicine initiative that builds on the accomplishments of the Human Heredity and Health in Africa (H3Africa) program, supported by the NIH and the Wellcome Trust. It could take advantage of genomics skills developed, samples collected and data sets generated to produce cost-effective custom arrays for pharmacogenomics or other diagnostic tools tailored for African populations. These same tools could be deployed to improve disease surveillance, and outbreak monitoring and response.
Another idea might be to strengthen African capacity in clinical and translational research, to better leverage the existing and predicted private investment in product trials across the continent. Perhaps a network of hubs could be developed, to harmonize standards and best practices, support training through shared curricula and coordinate robust use of informatics. If successful, these efforts could reduce research risks and encourage private industry to invest in Africa.
To help inform planning, CARI has commissioned two scoping studies. The first will generate a descriptive inventory of existing clinical and translational research capabilities across disease areas, phases of research and types of interventions. This will identify investment prospects to close gaps, and opportunities for population-based research and clinical trials. The second is an analysis to identify best practice mechanisms for biomedical R&D, assess their ability to attract investment, and study how well prepared individual African countries are to support research.
With global analysts in agreement that Africa is on the move, the time is ripe to highlight the untapped potential of R&D to produce economic growth and generate advances that could improve human health around the globe.