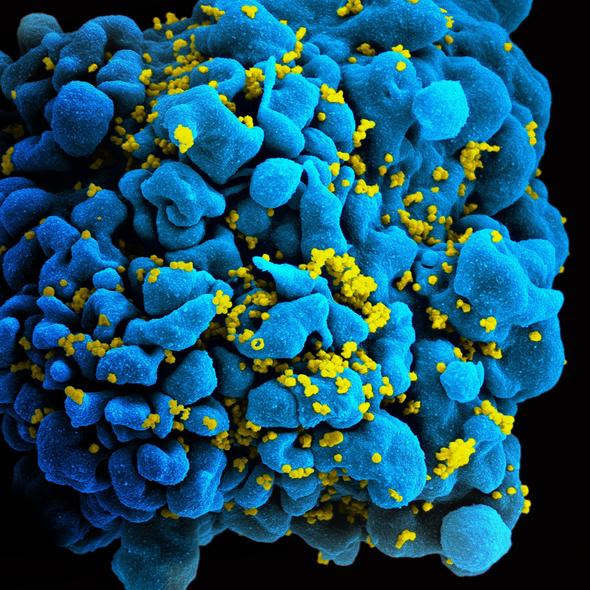 After receiving a course of antiretroviral therapy for their HIV-like infection, half of a group of monkeys infused with a broadly neutralizing antibody to HIV paired with an immune stimulatory compound suppressed the virus for over six months without additional treatment, according to NIAID-supported scientists. The therapy may have targeted the viral reservoir—populations of long-lived, latently infected cells that harbor the virus, and from where the virus rebounds when suppressive therapy is discontinued. The new findings may inform strategies that attempt to achieve sustained, drug-free viral remission in people living with HIV. Researchers discussed their results today at a press conference at the 25th Conference on Retroviruses and Opportunistic Infections (CROI) in Boston.

NIH-Supported Scientists Find Combination Therapy Suppresses HIV-Like Virus in Primates
March 4, 2018
After receiving a course of antiretroviral therapy for their HIV-like infection, approximately half of a group of monkeys infused with a broadly neutralizing antibody(link is external) to HIV combined with an immune stimulatory compound suppressed the virus for six months without additional treatment, according to scientists supported in part by the National Institute of Allergy and Infectious Diseases (NIAID), part of the National Institutes of Health. The therapy may have targeted the viral reservoir—populations of long-lived, latently infected cells that harbor the virus and that lead to resurgent viral replication when suppressive therapy is discontinued.
The new findings may inform strategies that attempt to achieve sustained, drug-free viral remission in people living with HIV. Researchers discussed their results today at a press conference at the 25th Conference on Retroviruses and Opportunistic Infections (CROI) in Boston.
“HIV excels at evading the immune system by hiding out in certain immune cells. The virus can be suppressed to very low levels with antiretroviral therapy, but quickly rebounds to high levels if a person stops taking medications as prescribed,” said Anthony S. Fauci, M.D., NIAID Director. “The findings from this early stage research offer further evidence that achieving sustained viral remission without daily medication might be possible. This potential application is yet another example of how the research community is using powerful, broadly neutralizing antibodies in multiple experimental applications to protect against and treat HIV.”
In the study, scientists from Beth Israel Deaconess Medical Center (BIDMC) led by Dan Barouch, M.D., Ph.D., and their collaborators first infected 44 rhesus macaques with simian human immunodeficiency virus (SHIV), an HIV-like virus commonly used in nonhuman primate studies. They then initiated daily antiretroviral therapy (ART) during acute infection to suppress the virus to below detectable levels in the monkey’s blood. After 96 weeks of continuous ART, researchers divided the monkeys into four equal groups: a group that received five infusions of the HIV bNAb known as PGT121; a group that received ten administrations of GS-9620, an immune stimulant under development at Gilead Sciences; a group that received both therapies; and a control group that received neither. Researchers continued to administer ART throughout this period and afterward for 16 additional weeks. Antibody levels were undetectable for at least eight weeks prior to discontinuation of ART. The experiment was designed to determine whether this combination of antibody and immune stimulant could reduce the viral reservoir while virus replication was well controlled by ART.
After discontinuation of ART, virus rebounded in the blood of all 11 of 11 control monkeys after a median of 21 days.  By contrast, six of 11 monkeys that received the combination of PGT121 and GS-9620 showed a delayed viral rebound after a median of 112 days, and five of 11 animals in the combination group did not rebound for at least 168 days after discontinuing ART.  The animals in the combination group that did rebound demonstrated viral loads that were more than 100-fold lower than the control group. The monkeys treated with the combination also had markedly less viral DNA in their lymph nodes, suggesting that the reservoir was reduced but not eliminated. The addition of GS-9620 appeared to extend both the length of viral suppression and the magnitude of reduction in the viral reservoir. Examining how this occurred, and expanding on this strategy, may help scientists determine a way to safely reduce the viral reservoir in humans, with the eventual goal of allowing people living with HIV to suppress the virus without regular medication.
“Our findings suggest that the development of interventions to activate and eliminate a fraction of the viral reservoir might be possible,” said Dr. Barouch, principal investigator of the study and director of the Center for Virology and Vaccine Research at BIDMC. “Although we are still a long way off from having a cure for HIV, our data suggest a strategy for targeting the viral reservoir that can be further explored.”
Several different anti-HIV bNAbs are currently being tested in animal models and humans for both the prevention and treatment of HIV infection. Compared with ART, which needs to be taken daily, antibodies to HIV tend to last longer in the body and have shown promise as candidates for long-acting HIV therapeutics and prevention modalities. PGT121, the bNAb evaluated in this study, is being studied in two currently enrolling clinical trials in humans being conducted at BIDMC.
Unlike previous studies of therapeutic bNAbs, this study combines a bNAb with GS-9620, a drug that binds to and activates an immune cell molecule called TLR7.  The interaction stimulates an arm of the immune system referred to as innate immunity, which include immune defenses not specific to any particular infectious agent. Although further study is needed to understand to what extent this stimulation occurred in the experiment, the researchers believe that the combination of GS-9620 and PGT121 may have reduced the viral reservoir.
Dr. Barouch’s team and their collaborators at BIDMC, Harvard University, the Ragon Institute, Gilead Sciences and Bioqual will continue to study blood and tissue samples collected from the monkeys to unravel the biological mechanisms behind their striking results and to determine if the experimental therapy may be appropriate for testing in human subjects.
Reference:  PGT121 Combined with GS-9620 Delays Viral Rebound in SHIV-Infected Rhesus Monkeys. E Borducchi, et al. Conference on Retroviruses and Opportunistic Infections, March 6, 2018.
Publicado por salud equitativa en 4:28