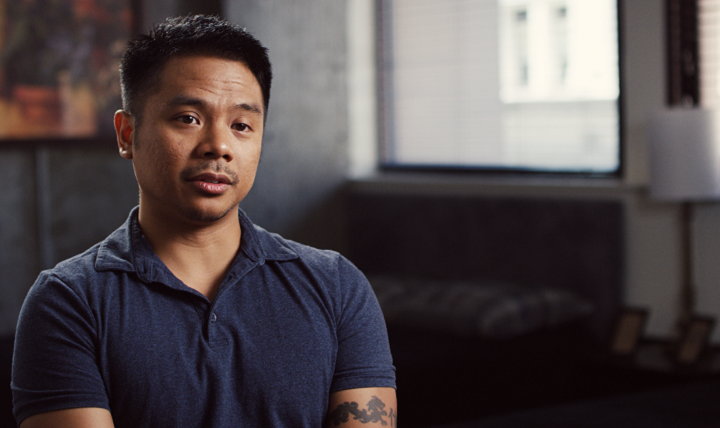 Former Army Sgt. Wendell Guillermo sustained a traumatic brain injury in Iraq when his unit was hit by a grenade. Despite experiencing some of the common symptoms of TBI including headaches, irritability, memory loss and sensitivity to light and sound following an incident in combat, Guillermo soldiered on. Years later, he was diagnosed with a mild to moderate TBI.


SILVER SPRING, Maryland — Former Army Sgt. Wendell Guillermo sustained a traumatic brain injury (TBI) in Iraq when his unit was hit by a grenade. Army Sgt. 1st Class Bradley Lee sustained a brain injury during a firefight in Afghanistan. Their compelling stories of recovery are featured this Brain Injury Awareness Month through A Head for the Future — a TBI awareness initiative from the Department of Defense (DoD). Video stories about Guillermo, Lee and other TBI champions are featured at A Head for the Future and on A Head for the Future's YouTube channel.
“During Brain Injury Awareness Month and beyond, we want our military community to know that recovery from a TBI is possible. Wendell’s and Bradley’s compelling stories are proof,” said Dr. Scott Livingston, director of education at the Defense and Veterans Brain Injury Center. “Each TBI is different, not everyone experiences the same symptoms or requires identical treatment. I encourage people in the military community to obtain early diagnosis, evaluation and treatment of TBI when possible.”
The spotlight of the videos launches a variety of activities to recognize Brain Injury Awareness Month in March. Along with the videos, A Head for the Future is highlighting additional stories through a #TBIchampions social media campaign on Facebook and Twitter. The campaign includes images and quotes from military health care professionals, health care staff, leaders of the DoD and the Department of Veterans Affairs, and others who share insights about their work to prevent, diagnose and treat TBI.
According to recent DoD data, since 2000 more than 375,000 service members have been diagnosed with TBI — most occurring in noncombat incidents such as training accidents, falls, motor vehicle collisions and sports-related incidents.
Despite experiencing some of the common symptoms of TBI including headaches, irritability, memory loss and sensitivity to light and sound following an incident in combat, Guillermo soldiered on. Years later, he was diagnosed with a mild to moderate TBI. The diagnosis allowed him to learn more about ways to manage his symptoms. Today, he has found success in his career and stays active to cope with the effects of TBI.
“You have to be very proactive in order to address TBI. The earlier you attack it, the better it is for the veteran overall in the long haul,” Guillermo said. “The whole premise here is getting the help that you rightfully deserve for serving your country.”
While deployed in Afghanistan, Lee sustained a TBI during a firefight. He didn't know he was injured and downplayed the severity of the incident. When Lee returned stateside, his wife, Jennifer, noticed that he was experiencing memory loss. After Lee returned to Afghanistan from leave home, Jennifer called his sergeant major to share her concerns and request a medical checkup for her husband. Lee was subsequently diagnosed with TBI. He's thankful that his wife spoke up when she noticed challenges.
"The Army cannot function if soldiers can't take care of themselves," said Lee. "You need to see the medical professionals and get things fixed."

The road to recovery for a traumatic brain injury starts with an evaluation. Regardless of severity or cause, all TBIs require medical attention, experts warn.
Recommended Content:
Traumatic Brain Injury | Warrior Care

This display of work and art are the Veterans' processing of loss of friends and identity/guilt/grief, and a multitude of other struggles war and combat have placed upon them
Recommended Content:
Warrior Care | Traumatic Brain Injury

Prevent TBIs this summer and beyond

Each year, more than 1 million people visit the emergency room because of TBIs. And contrary to common belief, most TBIs experienced by service members result from motor vehicle accidents, not exposures to blasts. TBI can damage your brain tissue, and it can impair your speech and language skills, balance and motor coordination and memory
Recommended Content:
Mental Wellness | Men's Health | Traumatic Brain Injury

Innovative scanner designed to save Marines' lives on the battlefield

The Infrascanner is a portable, medical diagnostic device that provides early detection of bleeding within the skull, in the field
Recommended Content:
Traumatic Brain Injury | Technology | Innovation

The holistic focus of MIST recognizes that the whole person is affected by brain injuries and the conditions that often accompany them
Recommended Content:
Military Hospitals and Clinics | Mental Health Care | Traumatic Brain Injury | Mental Wellness

There are four parts of traumatic brain injury (TBI): prevention, screening, treatment, and recovery. In the final part in our series on TBI, we walk through the progress Coast Guard Petty Officer Colin Woodside continues to make in his recovery
Recommended Content:
Traumatic Brain Injury

There are four parts of traumatic brain injury (TBI): prevention, screening, treatment, and recovery. In the third part in our series on TBI, we talk about the treatments available after a TBI.
Recommended Content:
Traumatic Brain Injury