Severe bacterial infections are a leading cause of death among neonates in low-income countries, which harbor several factors leading to emergence and spread of multidrug-resistant bacteria. Low-income countries should prioritize interventions to decrease neonatal infections; however, data are scarce, specifically from the community. To assess incidence, etiologies, and antimicrobial drug–resistance patterns of neonatal infections, during 2012–2014, we conducted a community-based prospective investigation of 981 newborns in rural and urban areas of Madagascar. The incidence of culture-confirmed severe neonatal infections was high: 17.7 cases/1,000 live births. Most (75%) occurred during the first week of life. The most common (81%) bacteria isolated were gram-negative. The incidence rate for multidrug-resistant neonatal infection was 7.7 cases/1,000 live births. In Madagascar, interventions to improve prevention, early diagnosis, and management of bacterial infections in neonates should be prioritized.
Most deaths of children <5 years of age (6.3 million in 2013) still occur in low-income countries; a leading cause is infectious disease (1). In these countries, deaths of neonates are particularly concerning; in 2013, there were 20 deaths/1,000 live births, 23% directly attributable to severe infections (1–3). Each year in low-income countries, 7 million possible (clinical signs with no bacteriological documentation) severe neonatal bacterial infections occur (4,5). In these countries, multiple factors lead to enhanced emergence and spread of drug-resistant bacteria (e.g., antimicrobial drug misuse, poor quality or counterfeit drugs, and substandard hygiene and living conditions) (6,7). This phenomenon involves gram-positive (Staphylococcus aureus and Streptococcus pneumoniae) and gram-negative (Haemophilus influenzae, Enterobacteriaceae) bacteria (8). These pathogens, especially those acquired in hospitals, are becoming increasingly resistant to multiple drugs; for most populations in these settings, the antimicrobial drugs required to treat these infections are not affordable (9).
Because few data on the burden of invasive bacterial infections and resistance patterns in low-income countries are available, we do not have an accurate picture of their true burden among the youngest children. Indeed, most studies of antimicrobial drug resistance in neonates were conducted >10 years ago. Data about antimicrobial drug resistance were sparse and often relied on few isolates; no clear conclusions have been made with regard to Enterobacteriaceae resistance to third-generation cephalosporins (6%–97% of infections) or methicillin resistance among S. aureus (0–67%) (10,11). Moreover, data regarding infections occurring in the community, which may differ from those in hospitalized persons, are especially lacking. To our knowledge, incidence rates for severe resistant infections in neonates have not been estimated (10,11).
In low-income countries, investment and mobilization to control neonatal infections and antimicrobial drug resistance remain extremely low. As long as the real burden of these events remains unknown, the scope for public health decision-making will be limited (10,12). Therefore, to assess incidence, etiologies, and antimicrobial drug–resistance patterns of neonatal infections, we conducted a prospective study of a cohort of 981 newborns enrolled at birth in rural and urban communities in Madagascar, one of the poorest countries in the world, where the mortality rate for neonates is high (13).

This study was part of the Bacterial Infections and Antimicrobial Drug Resistant Diseases among Young Children in Low-Income Countries (BIRDY project, http://www.birdyprogram.org). The BIRDY project investigates and responds to consequences of bacterial sepsis and antimicrobial drug resistance in children <2 years of age (protocol in Technical Appendix[PDF - 719 KB - 19 pages]). The study was authorized by the Institut Pasteur in Paris and by the Ethics Committee in Madagascar. Informed consent was obtained for all participants. 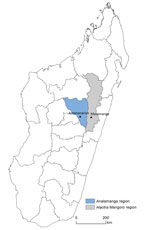 We exhaustively identified pregnant women within the study areas during their routine third trimester antenatal visit and pre-enrolled those who met the following criteria: routine residence in the study area with no plan to move away during the follow-up period and no opposition to the research being conducted or to the collection of biological samples (Technical Appendix[PDF - 719 KB - 19 pages]). We actively monitored preincluded women to ensure enrollment of their neonates at birth. At the time of preinclusion or at delivery, a vaginal swab sample was collected from the pregnant women to detect group B Streptococcus (GBS).

To ensure the exhaustiveness of live-birth recruitment, newborns were eligible at birth, even if their mothers had not been pre-enrolled. Neonate inclusion criteria were similar to preinclusion criteria of pregnant women: neonates born to parents living in the study area with no plan to move during the follow-up period; those whose legal guardians were informed and had no objection to the study procedures and collection of biological samples; and those for whom written consent was obtained from at least 1 legal guardian.
We collected fecal samples from the mothers perinatally to test for extended-spectrum β-lactamase (ESBL)–producing Enterobacteriaceae. We also collected the mothers’ sociodemographic, medical, and obstetric characteristics; delivery information; and the neonates’ anthropometric measurements and Apgar scores.
The neonates were examined at birth, and risk factors for infection (Technical Appendix[PDF - 719 KB - 19 pages]) were assessed. The presence of risk factors for infection led immediately to collection of a placental biopsy sample and collection of gastric fluid (before the first feeding), deep auditory canal samples, and anal swab samples from the neonate to document perinatal bacterial colonization. We then referred neonates with suspected infection to a participating hospital for evaluation. When indicated, antimicrobial drugs were empirically administered according to the World Health Organization (WHO) criteria. For these neonates, we obtained blood samples and lumbar puncture samples (if indicated) beforehand (14).

We actively and prospectively followed up on all neonates during their first month of life. To detect early signs of infection, we arranged for home visits to be conducted twice during the first week of life, beginning within 3 days after delivery. Routine checkups were then conducted weekly during the first month. We conducted active monitoring to minimize the number of missed or uncharacterized suspected infections and to obtain anthropometric measurements. Throughout follow-up, we asked mothers to contact an investigator whenever the child had a fever or showed signs suggestive of infection (Technical Appendix[PDF - 719 KB - 19 pages]). If that occurred, the child was evaluated by a physician. When indicated, we collected samples including blood cultures according to the protocol and recorded clinical presentation, final diagnosis, and collected samples.
We adapted clinical criteria for infection and flow charts for bacterial sampling from WHO recommendations (Technical Appendix[PDF - 719 KB - 19 pages]). Decisions regarding antimicrobial drug treatments were left to the attending physicians to decide according to local protocols.

All samples were transported within hours to Institut Pasteur in Madagascar for analysis. Specimen sampling, bacterial isolation, and species identification were performed according to the procedures recommended by the French Society for Microbiology (15). Antimicrobial susceptibilities were determined by use of the disk-diffusion method, according to the recommendations of the French Society for Microbiology (Technical Appendix[PDF - 719 KB - 19 pages]) (15). Suspected ESBL-producing Enterobacteriaciae were confirmed by use of the double-disk synergy test. Escherichia coli ATCC 25922 was used for quality control strains.

All cases for whom clinical or biological criteria for bacterial infection occurred during the neonatal period (including biological markers of infection based on C-reactive protein or complete blood count when available) were reviewed by an epidemiologist, a neonatologist, and a microbiologist to classify them and exclude nonsevere cases and contaminants. We defined severe bacterial infection as 1) presence of clinical signs of sepsis according to the WHO guidelines (Technical Appendix[PDF - 719 KB - 19 pages]) and 2) a positive culture from blood or cerebrospinal fluid or urine (bacterial and leukocyte counts >105 and 104, respectively) or umbilical purulent discharge in case of omphalitis-associated sepsis. We defined 3 periods: very early (0–3 days), early (0–6 days), and late (7–30 days). We considered multidrug-resistant infections to be those caused by pathogens resistant to >1 agent in >3 antibacterial categories (16).

For our analyses, we used Stata version 12 (StataCorp, LLC, College Station, TX, USA). We used descriptive statistics (e.g., proportions, means, and SDs) to summarize characteristics of mothers and neonates. We compared differences in proportions and means by using the χ2 and Student t tests, respectively. p<0.05 was considered significant. We calculated the person-time (no. days followed until event [infection]) and then estimated the incidence of culture-confirmed severe neonatal infections per 1,000 live births. We calculated 95% CIs for all rates.
Top

Characteristics of Mothers and Neonates 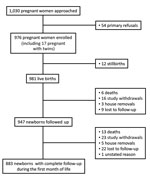 We cultured 144 blood (including 65 [45.1%] at birth), 79 urine, and 7 cerebrospinal fluid samples from neonates with clinical signs of infection (Table 2). Among blood samples, results of 9 (6.3%) were positive and 8 (5.5%) others were considered to be contaminated. Among urine samples, results were positive for 39 (49.4%), of which 3 were associated with severe neonatal infection. One (14.3%) cerebrospinal fluid sample was culture-positive for Pasteurella spp., and 2 (28.6%) others grew gram-negative bacteria that could not be further identified. Gram-negative rods were detected in 13 (81.2%) samples from the 16 neonates with culture-confirmed severe infections; the most prevalent pathogen was Klebsiella spp.

In total, 19 neonates, including 2 sets of twins and 1 other twin, died during the follow-up period. Four died at home with no etiology documented, 3 deaths were the direct consequence of severe prematurity, 1 was caused by birth injury, and 1 was caused by neonatal tetanus. The 10 remaining infants who died showed clinical signs of severe infection; no blood cultures could be performed before death. Six neonates were premature. All deliveries took place in healthcare facilities, except for 1, which occurred at home. The mother of a pair of twins was positive for vaginal carriage of GBS. A total of 4 neonates received a combination of gentamicin and a third-generation cephalosporin, and 5 received penicillin in addition to the 2 other drugs. All neonatal deaths except 1 occurred in the first week of life. None of the 16 neonates with a culture-confirmed severe infection died.
Top