Production of conventional vaccines, which involves the use of live-attenuated or purified protein subunits of pathogens, is a long and complex process. Nucleic acid vaccines are safer alternatives, and allow easy adjustment of antigen to target specific pathogens. DNA-based vaccines pose the risks of the DNA being incorporated into the genome of cells and anti-DNA antibody generation. Hence, RNA-based vaccines have distinct advantages and are considered safer. 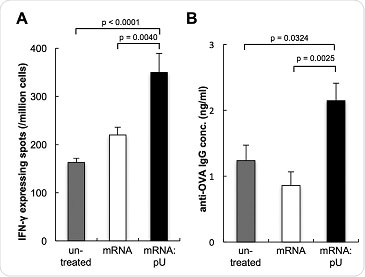 mRNA:pU elicits an enhanced cellular immune response (A) and antigen production (B) in vivocompared to single-stranded mRNA.
However, mRNA is unable to elicit an immune response sufficiently for activating antigen presenting cells (APCs), which is a crucial step for the vaccine to work effectively. So-called adjuvants have been used in several studies in order to address this, however, most of the studies used the adjuvants that are used in conventional vaccines, and few studies addressed the development of novel adjuvants that are suitable for mRNA vaccines. This prompted Japanese researchers to develop a safe and potent form of mRNA vaccine adjuvants that can elicit an effective immune response.
Keiji Itaka, Satoshi Uchida and colleagues at the Kawasaki Institute of Industrial Promotion, The University of Tokyo, Tokyo Medical and Dental University and Osaka Prefecture University, enhanced adjuvant properties of the RNA itself by utilizing the high immunogenicity of double stranded (ds)RNA. The dsRNA (referred to as mRNA:pU) comprised the mRNA itself and an RNA strand complementary to the poly A region of the mRNA. This particular design strategy resulted in significant immune stimulation in a cell line and bone-marrow-derived APCs in vitro. When injected into mice, mRNA:pU induced in vivo cellular and humoral immune responses that were more efficient than those produced by single-stranded mRNA.

The researchers were therefore successful in enhancing the immunostimulatory properties of mRNA, while exhibiting a high level of antigen protein translation. The ability of the mRNA:pU itself to also act as an adjuvant is significant since it ensures activation of the same APCs in which the mRNA is introduced, which had always been a challenge in previous strategies. The fact that mRNA:pU is only composed of RNA molecules offers an advantage over conventional vaccine adjuvants, since there is no risk of long term accumulation because RNA is usually degraded within a few days of administration.
The authors conclude that their “novel mRNA:pU formulation can be delivered using a variety of mRNA carriers depending on the purpose and delivery route, providing a versatile platform for improving mRNA vaccine efficiency.”
Source:
http://inewsletter-king-skyfront.jp/en/
Publicado por salud equitativa en 6:09