In cancer research, the “Cas-9–sgRNA” complex is an effective genomic editing tool, but its delivery across the cell membrane to the target (tumor) genome has not yet been satisfactorily solved. American and Danish scientists have now developed an active nanomotor for the efficient transport, delivery, and release of this gene scissoring system. As detailed in their paper in the journal Angewandte Chemie, their nanovehicle is propelled towards its target by ultrasound. 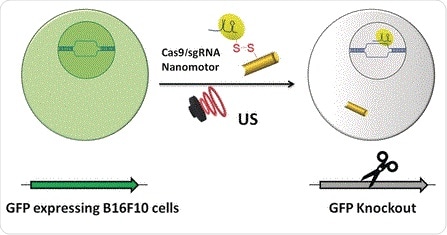 © Wiley-VCH
Genomic engineering as a promising cancer therapeutic approach has experienced a tremendous surge since the discovery of the adaptive bacterial immune defense system “CRISPR” and its potential as a gene editing tool over a decade ago. Engineered CRISPR systems for gene editing now contain two main components, a single guide RNA or sgRNA and Cas-9 nuclease. While the sgRNA guides the nuclease to the specified gene sequence, Cas-9 nuclease performs its editing with surgical efficiency. However, the delivery of the large machinery to the target genome is still problematic. The authors of the Angewandte Chemie study, Liangfang Zhang and Joseph Wang from the University of California San Diego, and their colleagues now propose ultrasound-propelled gold nanowires as an active transport/release vehicle for the Cas9–sgRNA complex over the membrane.
Gold nanowires may cross a membrane passively, but thanks to their rod- or wirelike asymmetric shape, active motion can be triggered by ultrasound. “The asymmetric shape of the gold nanowire motor, given by the fabrication process, is essential for the acoustic propulsion,” the authors remarked. They assembled the vehicle by attaching the Cas-9 protein/RNA complex to the gold nanowire through sulfide bridges. These reduceable linkages have the advantage that inside the tumor cell, the bonds would be broken by glutathione, a natural reducing compound enriched in tumor cells. The Cas9–sgRNA would be released and sent to the nucleus to do its editing work, for, example, the knockout of a gene.

As a test system, the scientists monitored the suppression of fluorescence emitted by green fluorescence protein expressing melanoma B16F10 cells. Ultrasound was applied for five minutes, which accelerated the nanomotor carrying the Cas9–sgRNA complex across the membrane, accelerating it even inside the cell, as the authors noted. Moreover, they observed their Cas9–sgRNA complex effectively suppressing fluorescence with only tiny concentrations of the complex needed.
Thus, both the effective use of an acoustic nanomotor as an active transporter and the small payload needed for efficient gene knockout are intriguing results of the study. The simplicity of the system, which uses only few and readily available components, is another remarkable achievement.
Source:
http://onlinelibrary.wiley.com/journal/10.1002/(ISSN)1521-3773/homepage/press/201804press.html
Publicado por salud equitativa en 6:08