A new study published online in the British Journal of Sports Medicine implies that older men could lower their risk of death by involving themselves in any level of physical activity, including light intensity exercise, for a few minutes. 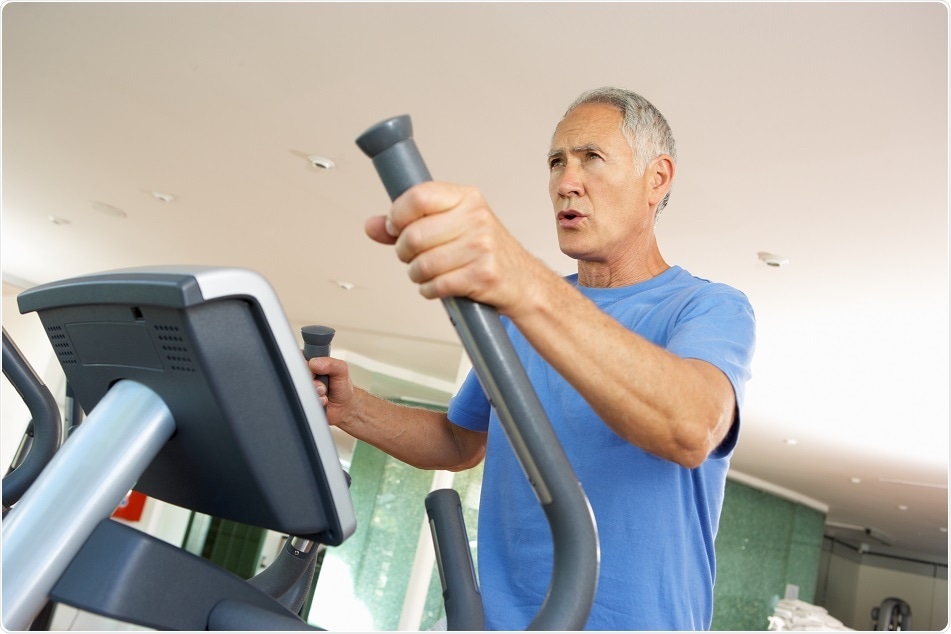 Credit: Monkey Business Images/ Shutterstock.com
According to researchers, low intensity exercises are better suited to older men. The current exercise guidelines recommend at least 150 minutes a week of moderate-to-vigorous physical activities in sessions lasting 10 or more minutes. However, it may be difficult for older adults to achieve such a pattern.
To discover whether other patterns of physical activity might be associated with a lower death risk, scientists assessed the data obtained from the British Regional Heart Study, which involved 7735 participants from 24 British towns, whose age ranged between 40 and 59 years when the study was carried out during 1978–1980.
In 2010–2012, the 3137 survivors were invited for a medical check-up, which included a physical examination and a questionnaire concerning their sleeping patterns, lifestyle, and their previous experience of heart disease, if any.
They were also instructed to wear an accelerometer – a device used to continuously track the volume and intensity of physical activity – during waking hours for 7 days. Their health conditions were then tracked until their death or June 2016, whichever came sooner.
In total, about 50% (1566) of the men agreed to wear the device; however, after excluding the participants with pre-existing heart disease and those who hadn't worn their accelerometer enough during the 7 days, the final analysis centered on 1181 men, whose average age was 78. During the study period of about 5 years, 194 of the men died.
The study findings showed that total volume of physical activity, starting from light intensity exercises up, was linked to a lower risk of death from any cause.
Furthermore, participants who participated in  an additional 30 minutes a day of low intensity physical activities had a reduced risk of death by 17%. This association persisted even after considering the potentially influential lifestyle factors, like sedentary time.

Though the equivalent reduction in the death risk was around 33% for every additional 30 minutes of moderate to vigorous intensity physical activity a day, the advantages of light intensity activity were sufficient to prove that this too might prolong life.
Sporadic bouts of activity were linked with a 41% lower risk of death and bouts lasting 10 or more minutes were linked to a 42% lowered risk. Sporadic bouts seemed easier to attain as 66% of the men achieved their weekly total of moderate to vigorous physical activity in this way; however, only 16% achieved their weekly total in bouts of 10 or more minutes.
In addition, there was no evidence to suggest that cutting down the sitting time was linked to a lower risk of death.

The results suggest that all activities, however modest, are beneficial. The finding that [low intensity physical activity] is associated with lower risk of mortality is especially important among older men, as most of their daily physical activity is of light intensity. Furthermore, the pattern of accumulation of physical activity did not appear to alter the associations with mortality, suggesting that it would be beneficial to encourage older men to be active irrespective of bouts.”
Dr Barbara Jefferis, University College London

Since the current research work is an observational study, no firm conclusions can be drawn about cause and effect. And those who wore the accelerometer tended to be younger and possessed healthier lifestyles than those who didn't. Therefore, this might account for distorted results. Moreover, the results were unclear on whether it would be equally applicable to younger age groups or older women.
Source:
https://eurekalert.org/pub_releases/2018-02/b-jaf021618.php
Publicado por salud equitativa en 7:08