By Dr Ananya Mandal, MDFebruary 22, 2018
University of Texas at Dallas researchers have managed to formulate a new technique by which they can isolate aggressive cells which can be the main cause behind metastasized cancers or cancers that have spread to other major organs from their primary site of occurrence.
This breakthrough may lead to isolation of these cells that could mean new ways of treatment could be devised against these cells. Results of the study are published in the latest issue of the journal Chemistry – A European Journal. 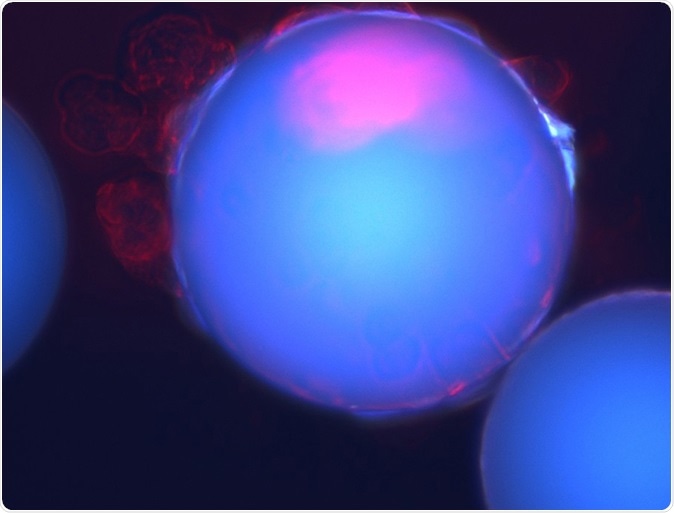 UT Dallas researchers used 40,000 tiny plastic beads (blue), each coated with a unique chemical compound, to identify one compound that bound only to breast cancer stem cells (red).
Dr. Jiyong Lee, assistant professor in the Department of Chemistry and Biochemistry in the School of Natural Sciences and Mathematics at UT Dallas explained that this new approach could help find ways in which cancer recurrence could be prevented. Dr Lee explained that not all cancers are same and some grow more aggressively than others. These cancer cells that grow more aggressively than others are the cancer stem cells. They migrate to other sites from the main area of occurrence and give rise to secondary tumors after the first one has been suitably treated. 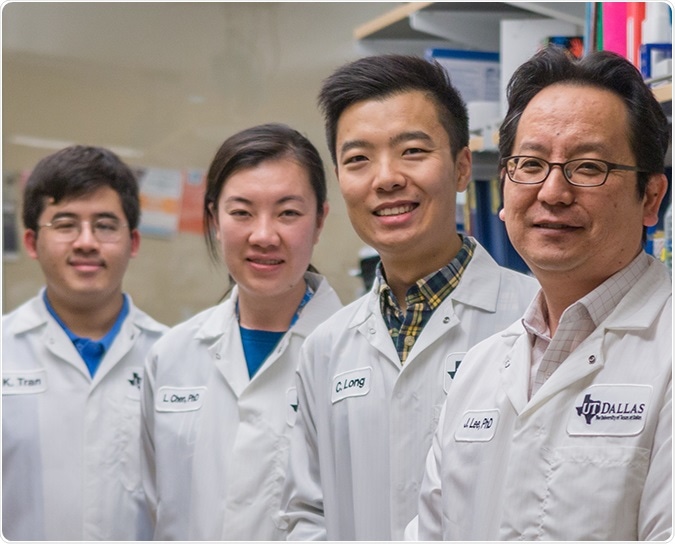 From left: Kha Andy Minh Tran BS’16; Dr. Luxi Chen, postdoctoral research associate; Chao Long, a doctoral student in chemistry and biochemistry; and Dr. Jiyong Lee, assistant professor of chemistry and biochemistry, were involved in the cancer stem cell study.
Stem cells and cancer recurrence and spread are innately connected. Stem cells are mother cells that can turn into any cells of the body when programmed. In addition stem cells have the power to renew themselves to live longer than regular cells. They can turn into any cells including muscles, bone marrow cells, skin, major organ cells etc. Cancer stem cells are found in some aggressive tumours that help them grow rapidly and also spread to distant organs. Once the primary tumors are treated and cured, these aggressive stem cells that have migrated to other major organs such as the liver, lungs, bones etc., continue to migrate and set up shop at different parts of the body so to speak. Treatments that can cure the cancer cells at the primary sites are usually fruitless against these cancer stem cells which can travel via blood stream to different organs as cause metastasis or spread of the tumors. These take years to appear after the initial cancer but are more difficult to treat say researchers.