By Dr Ananya Mandal, MD,December 10, 2017
A large published study that was reported in the journal New England Journal of Medicine, showed that there is a small but significant risk of breast cancer associated with regular use of hormonal birth control pills.
The study was titled, “Contemporary Hormonal Contraception and the Risk of Breast Cancer.” Most researchers believed that the risk of these cancers had been lowered with the use of low estrogen containing pills which are the norm now.
This new study by researchers from the University of Copenhagen followed up around 1.8 million Danish women under the age of 50 years, for an average of 11 years. Results showed that for every 10,000 women studied an additional 13 cases of breast cancers were reported with the use of these hormonal birth control pills. For every 100,000 women using these pills, there were 68 new cases of diagnosed breast cancer each year compared to 55 new cases of breast cancer among women who were not using these birth control pills. 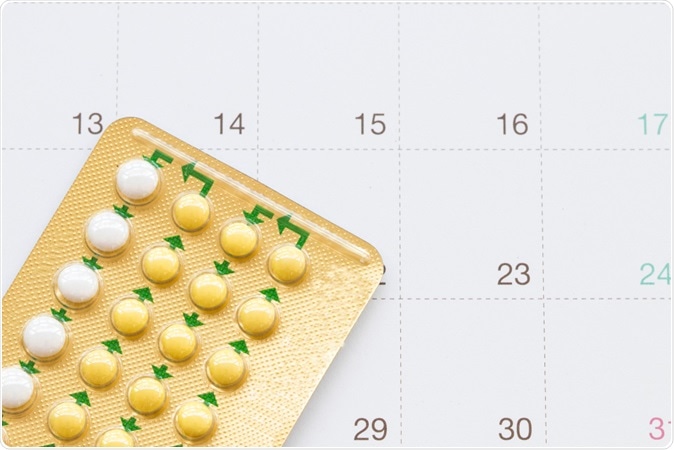 Image Credit: PHENPHAYOM / Shutterstock
The risk of getting breast cancer rose with the duration of use of these pills. The average risk of breast cancers was a 20 percent hike in all the present and recent users of hormonal pills. The risk was 9 percent higher among users who took the pills for less than a year. This risk rose to 38 percent among women who used these pills for over 10 years. They noted that women who used these pills for over five years, the risk of the cancers lasted for at least 5 years after they stopped. However there was a “rapid disappearance of excess risk of breast cancer after discontinuation of use among women who have used hormonal contraceptives for short periods,” write the authors.

There have been similar studies in the past but this large study was the first to look at breast cancer incidence among women using hormonal birth control pills that contain lower dose of estrogen. The authors noted that reducing the amount of estrogen in the pills hardly made a difference in their ability to raise risk of cancer. The other hormonal component in these pills is progestin. Progestin was not considered to be a risk factor for breast cancers earlier. Now this study reveals that progestin too could be raising the risk of breast cancer. Experts suggest that implants or intrauterine devices could be a better alternative to pills. In this a small device is inserted into the uterus and it prevents pregnancy.
Authors add in before concluding from their results that they did not account for other factors that could have raised the risk of breast cancers among the women. This includes alcohol consumption, regular physical activity or the lack of it and presence or absence of a history of breast feeding.
The American College of Obstetricians and Gynecologists (ACOG) is evaluating the new findings and has assured that despite this study, hormonal contraceptive pills are “among the most safe, effective and accessible options available.” These pills can also reduce the risk of getting endometriosis, ovarian cancer and colorectal cancers says Dr. Chris Zahn, vice president ACOG.
David J. Hunter, a professor of epidemiology and medicine at the University of Oxford, added in a commentary along with this new study that none of the modern contraceptives were risk-free.
Source:
http://www.nejm.org/doi/full/10.1056/NEJMoa1700732
Publicado por salud equitativa en 10:07