By Liji Thomas, MD
Fibrocystic disease of the breast is not really a disease condition and hence it is better referred to as fibrocystic breast changes. Breasts in many women develop a lumpy or cord-like feel, made up of prominent glandular epithelial tissue without any tumorous change. However, this is a variation of normal rather than a discrete condition by itself. 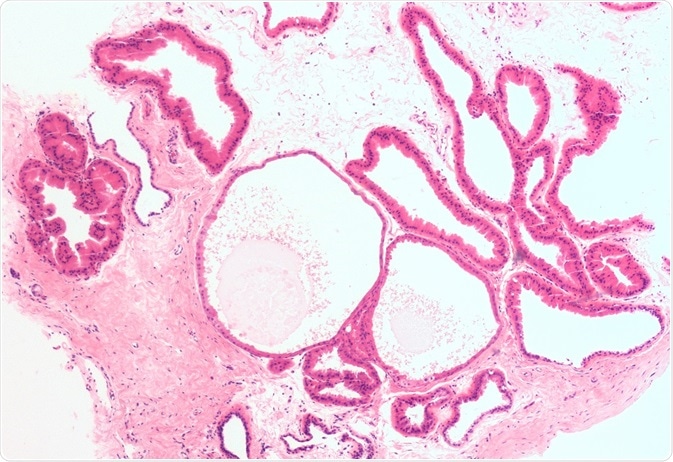 Credit: David Litman/ Shutterstock.com
In many women, fibrocystic breast changes are accompanied by (but do not cause) pain, tenderness and nodular texture of the breasts. The most common area for this type of symptom is the upper outer quadrant. They tend to cluster in the premenstrual time of the cycle, especially associating with the days immediately preceding menstruation.

The most common period for fibrocystic breasts to become noticeable is the age between 20 and 50. It is not a coincidence that this is also the period when female hormones are acting upon the woman’s body. Postmenopausal women who are not taking hormone replacement therapy hardly ever have symptoms of fibrocystic breasts.
Estrogen is the prime suspect in the pathogenesis of this condition. Fluctuations in estrogen level, which encompasses the hormonal drop to its lowest just before menstruation begins, and rise thereafter, can be linked to breast soreness, swelling in the form of diffuse or localized lumpiness and tender breasts which may respond by pain even to the touch of light clothing. The breasts feel heavier and more sensitive than usual. This tends to resolve rapidly once menstruation actually begins.
The nodularity of the fibrocystic breast is thought to be due to hormone level changes inducing hyperplasia of ductal lining cells and of lobular cells. In addition, progesterone may cause fluid retention leading to further swelling and enlargement of the breasts. Once this stimulation is over, the swelling may disappear. It is hypothesized that fibrocystic breast changes are the result of repeated stimulation by estrogen and progesterone over a long period, thus risk factors for fibrocystic breasts include:

The only urgent aspect of fibrocystic breast management is to rule out malignancy of the breast tissue. This is usually by a guided biopsy from any palpable mass. Once it is diagnosed to be part of fibrocystic breasts, the most effective treatment of fibrocystic breasts may be simple self-care.
This includes measures such as:
Medical management includes administration of drugs which antagonize the effects of the female hormones, such as danazol and tamoxifen. Their long-term use is not effective in terms of the expected complication rate, but they may be prescribed for short-term relief of symptoms. This is especially so for large and painful cysts. Another effective and less hazardous treatment consists of oral contraceptives which stabilize the hormone fluctuations by abolishing them. Evening primrose oil (with anti-inflammatory effects) and vitamin E (up to 1500 IU per day) are other possibly beneficial dietary supplements for fibrocystic breasts.
Lumpectomy is advised if the lump is suspicious for cancer or if the rest of the breast is normal except for one palpable well-defined lump. Large or painful cysts are sometimes advised to be aspirated but the risk of recurrence is present. If a cyst is persistently recurring after treatment by aspiration or has any features of abnormality, it may be best to remove it surgically.
Even without any treatment, fibrocystic disease is not a precursor of breast cancer; however, it may mask the appearance of a real malignancy within the dense breast tissue. As a result, regular follow-up is advised for such women for early detection of any breast cancer. Each visit may include some or all of the following, depending upon the risk each woman has:

Mammogram of any thickened or enlarged region