Tech designed for Africa helps US fight disease, save money 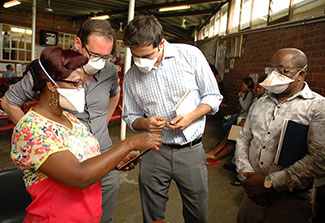 A mobile health tool conceived by a Fogarty grantee to support clinicians caring for HIV patients in Uganda is now creating American jobs, fighting disease, tackling the opioid epidemic, and saving money in health departments across the U.S. The platform is called emocha, which stands for electronic mobile comprehensive health application.
"It allows us to harness a piece of technology that most people have - a cellphone - and use it to not only improve health care for villagers in Uganda, but also for people in rural Texas and inner-city Maryland," said Dr. Robert Bollinger, the founder of Johns Hopkins University's Center for Clinical Global Health Education, and the Fogarty grantee who came up with the concept for emocha. "It's helped health departments in the U.S. save money, has created over a dozen jobs in Baltimore, and is spawning new employment and partnerships elsewhere."
It was in 2008, sitting under a shade tree in an East African village, that Bollinger sketched out on a piece of paper how the mobile phones that even the poorest Ugandan in the remotest village seemed to have could be harnessed to improve health. Bollinger wanted an app that would allow information to be sent by the touch of a button on a phone, and trigger "a series of strategic public health and clinical reactions throughout the health system," he said. The platform had to be secure enough to meet strict U.S. patient privacy rules, and the whole process - from the message being sent to the health authorities' response being activated - should happen within 10 minutes. It was a fairly tall order, but within months, clinicians in rural Uganda were using emocha on their cellphones to securely exchange data with health officials in distant cities.
The app developed for Uganda allowed health workers to watch training videos, access university libraries, securely enter patient data and capture their location using GPS technology - all via a mobile phone touch-screen. Within six years, emocha had been deployed in 20 countries and expanded its portfolio of applications, allowing health workers from India to South Africa, and Bolivia to Australia to use mobile phones to control dengue; screen for HIV, cancer or diabetes; track the insects that transmit Chagas disease; and more.
With doctors from around the world contacting Bollinger to get emocha deployed in their countries, Johns Hopkins in 2014 licensed the technology to emocha Mobile Health. The Baltimore-based company added video directly observed therapy (video DOT) to emocha, allowing patients to use their phone to film themselves taking medication; enter cravings, symptoms or side effects data for conditions like opioid addiction, tuberculosis or hepatitis C; and send the information to their care providers. 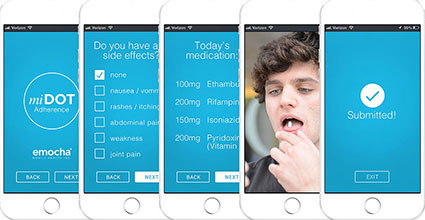 Image courtesy of emocha Mobile Health
An emocha app provides a directly observed therapy (DOT) interface for
TB patients, reducing the number of clinic visits needed for their treatment,
lowering costs.
"By digitizing directly observed therapy, where a health care worker has to physically be with the patient to confirm they take their medications, we've made it more affordable for health departments to manage diseases like tuberculosis," said emocha co-founder and managing director, Morad Elmi. "By law, TB patients must be observed when they take their medication. Until we created our video DOT application, there was no efficient, scalable, cost-effective way to confirm dose-by-dose medication ingestion."
To be cured of TB, patients must take antibiotics daily for at least six months, and be observed by a medical practitioner while doing so. The regimen is costly - more than $1 million for a single patient with drug-resistant TB - and missing a dose can set the patient's treatment plan back to zero. In places where video DOT has been introduced, adherence to TB treatment has increased from 50 percent to 90 percent, not only saving lives but also money.

From Fogarty input to U.S. jobs

Emocha Mobile Health has expanded to include about a dozen employees in Baltimore and is continuing to attract clients with new apps addressing U.S. and global health concerns including weight control, smoking cessation, congestive heart failure and infectious diseases such as Ebola, measles or MERS. Without Fogarty, none of that would have happened, said Bollinger.
"It was Fogarty scholars and former trainees who tested our mHealth app and gave us honest, scientific and properly validated assessments and reviews of it when we launched in Uganda," he explained. "Fogarty has a very strong program that has produced well-trained researchers there. Without access to Uganda's Fogarty alumni, we never would have gotten anywhere with emocha - or at least not as quickly as we did."
Among the scientists who tested the mobile health platform was former Fogarty trainee, Dr. Elioda Tumwesigye, now the head of Uganda's Ministry of Science, Technology and Innovation. He worked with another Fogarty alum, Dr. Henry Tumwebaze, to capture data about the HIV status of nearly 900 adults living in the southwestern region of the country. The study, supported by NIH's National Institute of Allergy and Infectious Diseases (NIAID), found that providing in-home HIV counseling and testing led to higher uptake of HIV prevention and care services through referrals, and better targeted follow-up than had been accomplished through other strategies.

With a $1.7 million grant from NIH's National Institute on Drug Abuse (NIDA), emocha is testing how video DOT can help bring the U.S. opioid crisis under control. Specifically, video DOT is being used to monitor adherence to a treatment regimen that uses buprenorphine, a drug that acts on the receptor targets of heroin and morphine without producing the same intense "high" or dangerous side effects. Unlike methadone, which must be administered in a highly structured clinic, buprenorphine can be dispensed in a doctor's office or prescribed for take-home use, reducing stigma and increasing access to treatment. But for buprenorphine to successfully help someone to kick addiction, a well-regimented treatment plan must be followed. That's where video DOT can play a role. 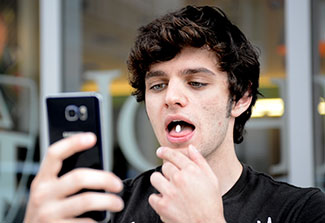 Photo courtesy of emocha Mobile Health
Using emocha, patients can use their phones to film
themselves taking medication, and to enter cravings,
symptoms, or side effects data.
"Our technology will support patients who are beginning or struggling to achieve stability in buprenorphine treatment. Patients will record themselves taking buprenorphine, report side effects and cravings, access local resources, receive medication reminders, and visualize progress in their recovery," said Elmi. "Providers or a care team can then assess the data and engage with the patients who need it most. This will help more patients recover faster and can help reduce medication diversion."
Just as it has done with TB, video DOT could save American lives and money if it is found to be successful in helping opioid users to kick their habit. The U.S. opioid epidemic is estimated to cost more than $78.5 billion a year, in health care and criminal justice expenses, as well as lost productivity. In Harris County, Texas, where it's being used to improve adherence to costly TB and hepatitis C treatments, health officials say they have seen "noticeable reductions in outreach worker costs and travel expenses." A study conducted in Maryland by Johns Hopkins researchers concluded that video DOT saved more than $1,400 per TB patient over a six-month treatment period compared to traditional directly observed therapy.
"Emocha is showing that a project conceived to improve health in Uganda can have a huge return on investment in the U.S.," said Elmi. "We've hired people, all U.S.-based, we're helping health departments save taxpayers' money - and we're improving the health of people in the United States, and around the world."