Sepsis is a serious medical condition. It is caused by an overwhelming immune response to infection. The body releases immune chemicals into the blood to combat the infection. Those chemicals trigger widespread inflammation, which leads to blood clots and leaky blood vessels. As a result, blood flow is impaired, and that deprives organs of nutrients and oxygen and leads to organ damage.
In severe cases, one or more organs fail. In the worst cases, blood pressure drops, the heart weakens, and the patient spirals toward septic shock. Once this happens, multiple organs—lungs, kidneys, liver—may quickly fail, and the patient can die.
Sepsis is a major challenge in hospitals, where it’s one of the leading causes of death. It is also a main reason why people are readmitted to the hospital. Sepsis occurs unpredictably and can progress rapidly. 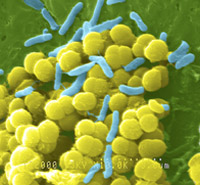 Colorized scanning electron micrograph of bacteria. Credit: Tina Carvalho, University of Hawaii at Manoa.
Many types of microbes can cause sepsis, including bacteria, fungi, and viruses. However, bacteria are the most common cause. In many cases, doctors cannot identify the source of infection.
Severe cases of sepsis often result from a body-wide infection that spreads through the bloodstream. Invasive medical procedures such as inserting a tube into a vein can introduce bacteria into the bloodstream and bring on the condition. But sepsis can also come from an infection confined to one part of the body, such as the lungs, urinary tract, skin, or abdomen (including the appendix).

Anyone can get sepsis. The people at highest risk are infants, children, the elderly, and people who have serious injuries or medical problems such as diabetes, AIDS, cancer, or liver disease.

How many people get sepsis?

Severe sepsis strikes more than a million Americans every year,1 and 15 to 30 percent of those people die. The number of sepsis cases per year has been on the rise in the United States.2 This is likely due to several factors:

What are the symptoms of sepsis?

Common symptoms of sepsis are fever, chills, rapid breathing and heart rate, rash, confusion, and disorientation. Many of these symptoms are also common in other conditions, making sepsis difficult to diagnose, especially in its early stages.

How is sepsis diagnosed?

Doctors will start by checking for the symptoms mentioned above. They may also test the person’s blood for an abnormal number of white blood cells or the presence of bacteria or other infectious agents. Doctors may also use a chest X-ray or a CT scan to locate an infection. 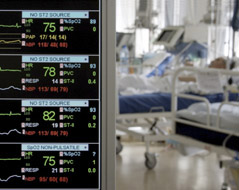 How is sepsis treated?

Doctors typically treat people with sepsis in hospital intensive care units. Doctors try to stop the infection, protect the vital organs, and prevent a drop in blood pressure. This almost always includes the use of antibiotic medications and fluids. More seriously affected patients might need a breathing tube, kidney dialysis, or surgery to remove an infection. Despite years of research, scientists have not yet developed a medicine that specifically targets the aggressive immune response seen with sepsis.
More information about the symptoms, diagnosis, and treatment of sepsis is available from the Centers for Disease Control and Prevention at https://www.cdc.gov/sepsis

Are there any long-term effects of sepsis?

Credit: iStock.
Many people who survive severe sepsis recover completely, and their lives return to normal. But some people, especially those with pre-existing chronic diseases, may have permanent organ damage. For example, in someone who already has impaired kidneys, sepsis can lead to kidney failure that requires lifelong dialysis.
There is also some evidence that severe sepsis disrupts a person’s immune system, making him or her more at risk for future infections. Studies have shown that people who have experienced sepsis have a higher risk of various medical conditions and death, even several years after the episode.

What is the economic cost of sepsis?

Sepsis treatment is expensive. It often involves a prolonged stay in the intensive care unit and complex therapies with high costs. The Agency for Healthcare Research and Quality lists sepsis as the most expensive condition treated in U.S. hospitals, costing nearly $24 billion in 2013.3 People with sepsis are two to three times more likely to be readmitted to the hospital as people with many other conditions, including heart failure, pneumonia, and chronic obstructive pulmonary disease.4 Readmissions due to sepsis are also more expensive than readmissions due to any of these other conditions.

What research is being done on sepsis?

The National Institutes of Health is supporting hundreds of clinical trials on sepsis (see https://clinicaltrials.gov

). Some of these studies evaluate the effectiveness of potential treatments. Others seek molecular clues in patients’ blood that could diagnose sepsis early, allowing doctors to treat the condition before it is too late. Still others examine sepsis in specific populations, such as premature babies, people with traumatic injuries, or long-term survivors.
Articles, videos, images, and more about physical trauma and sepsis can be found on the NIGMS Science Education page.
NIGMS is a part of the National Institutes of Health that supports basic research to increase our understanding of biological processes and lay the foundation for advances in disease diagnosis, treatment, and prevention. For more information on the Institute's research and training programs, visit https://www.nigms.nih.gov.
Content updated September 2017
1. Hershey TB, Kahn JM. State sepsis mandates—a new era for regulation of hospital quality. N Engl J Med [Internet]. 2017 May 21 [cited 2017 June 15]; 376:2311-2313. Available from: https://www.nejm.org/doi/full/10.1056/NEJMp1611928