By Liji Thomas, MD
Small intestinal bacterial overgrowth (SIBO) is a medical condition in which bacteria in the gut overgrow. This normally does not occur under good health conditions. Certain conditions have been identified to increase the risk of this occurrence: 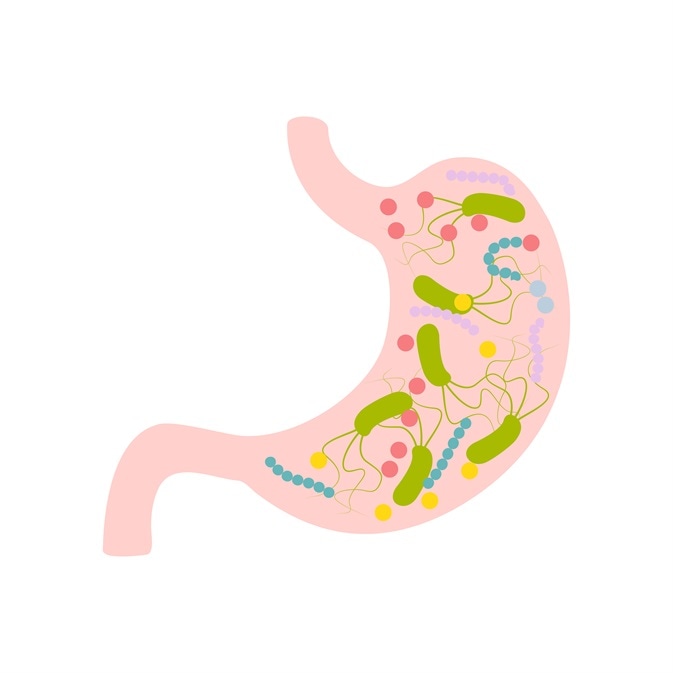 Gastric hydrochloric acid is a powerful suppressant of bacterial growth, so that very few or no bacteria are found in the stomach, and the count is low even in the upper small intestine. For this reason, hypochlorhydria is a risk factor for SIBO. This may be associated with H. pylori colonization or age-related degeneration of acid-producing gastric cells. The use of anti-acidity agents such as H2 receptor blockers or proton pump inhibitors is another cause.

Dysmotility of the small bowel

Normal gut motility is designed to carry food through the digestive tract, but abnormalities in the formation of the migrating motor complex that normally occurs once in 1.5-3 hours can promote SIBO. Chronic diabetes, some post-viral syndromes, ischemia of the gut, or connective tissue disorders, may all cause gastroparesis, which leaves food stagnant and prone to bacterial colonization in the upper gut.
Dysmotility of the upper small intestine is another risk factor as it fails to move out bacteria from this segment effectively into the colon. This may be associated with cirrhosis and portal hypertension, chronic kidney failure, scleroderma and other myopathies, as well as neuropathies, which interfere with bowel movement. About half of all patients with scleroderma have signs of SIBO.

How dysmotility is related to SIBO

In elderly people, the chief cause of SIBO is dysmotility. This may be due to slowing motility with age, the effects of medication, associated medical conditions such as Crohn’s or irritable bowel syndrome, and metabolic disorders such as chronic diabetes. Dysmotility increases the ease with which colonic bacteria can enter and colonize the small intestine.

Chronic pancreatitis is another cause of SIBO, because it not only reduces the motility of the small intestine due to local inflammation, but also entails the administration of powerful narcotics, which further slow the gut. The high risk of intestinal obstruction adds to the chances of SIBO in this condition.
Intestinal fistulas or enterostomies may lead to stagnation, while anastomoses cause recirculation of bowel contents. These risks are greater if the patient has had radiation, Crohn’s disease, intestinal reconstruction.
Finally, disturbances of bowel movement such as chronic diarrhea predispose to SIBO.

SIBO may also occur following the creation of a blind loop in the GI tract by surgery, or the occurrence of small intestinal diverticula, especially if they are large and located in the duodenum and jejunum, or the formation of post-surgical, post-medication or post-radiation strictures. Dysfunction of the ileocecal valve also promotes the backwash of colonic microflora into the small intestine, almost doubling the prevalence of SIBO in patients with Crohn’s disease.

Patients with abnormalities of cellular immune function are more likely to have SIBO.

It is well known that SIBO shares many common if nonspecific symptoms with IBS such as bloating, cramping, and abdominal distension. Some studies have shown an overlap of 65-84% between these conditions, but others failed to confirm this finding. However, the association is biologically plausible due to the presence of delayed transit and dysmotility in IBS, which could account for the occurrence of SIBO.

Patients with uncontrolled diabetes or chronic hyperglycemia may have neuropathic gastric and small intestinal dysmotility. About 75% of diabetics had SIBO. Almost half of all diabetic patients complaining of chronic diarrhea had SIBO, and the symptoms improved with antibiotic treatment.

Many older adults have SIBO, because of decreased gastrointestinal motility, but more importantly due to the ingestion of many medications, which predispose to SIBO by slowing down bowel peristalsis, reduced ambulation, the presence of metabolic diseases, malnutrition, and lowered cellular gut immunity.

Celiac disease can eventually disrupt gut motility leading to SIBO. One study showed that two-thirds of patients had overgrowth and responded to its treatment with a reduction in symptoms, especially when they failed to respond to gluten-free diets.

Patients with diarrhea of unidentified origin had SIBO in a third of cases.

Patients with renal failure, obstructive jaundice following surgery, and acute pancreatitis, besides alcohol abuse, may have symptoms related to gastrointestinal function, as may patients who have recently undergone antibiotic therapy. These are thought to be due to disturbances of motility due to neuropathy or disruption of the microflora within the gut.

There is an increased prevalence of SIBO, up to 60%, in cirrhosis with portal hypertension. The more severe the disease, as shown by bilirubin levels and ascites volume, the more likely the patient was to have SIBO. This is also associated with the development of systemic sepsis in this condition.
Reviewed by Jonas Wilson, Ing. Med.
References