Sponsored Content by Bruker BioSpin - NMR, EPR and ImagingOct 3 2017
Studied for over 35 years, neurotensin is a peptide that plays the role of a hormone in the gut and acts as a neurotransmitter in the brain. It modulates brain function and has been implicated in several central nervous system disorders, notably Parkinson’s disease, schizophrenia, eating disorders, drug abuse, and even pain, cancer and inflammatory symptoms. Its pathway has therefore become an important drug target to treat neurological diseases. 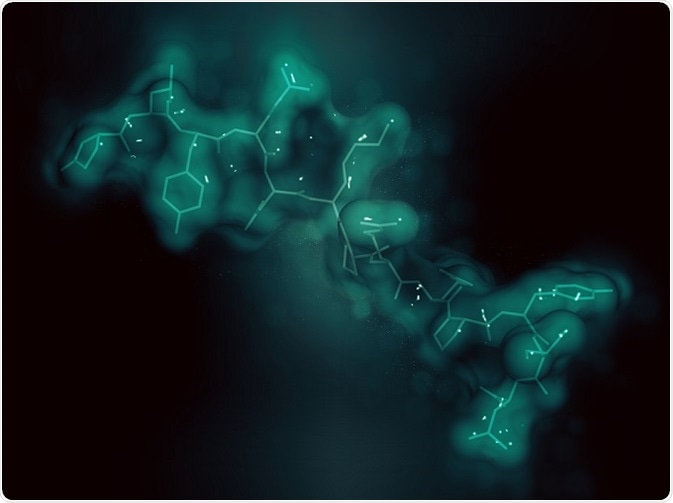 Credit: molekuul_be/Shutterstock.com
Over the years, researchers have tried to identify target molecules to modulate the activity of neurotensin through neurotensin receptor 1 (NTS1). NTS1, has the highest affinity to neurotensin and is the most studied NTR. It is expressed in both neurons and glial cells and is broadly distributed in the CNS. However, G-protein coupled receptors with a neuropeptide binding site like NTS1 are a challenging class of drug targets.
So far, the full therapeutic potential of this pathway hasn’t been exploited because of the lack of compounds with the right physicochemical and pharmacokinetic properties to interact with NTS1 and with the capacity to cross the blood brain barrier to actually reach to NTS1 receptors in the brain.
However, in the more recent years, there has been great progress in the generation and purification of stabilized variants of solubilized NTS. That, with the determination of the structure of the NTS1 molecule, has allowed for fragment-based screening of molecules to find more compounds capable of interacting with NTS1.
Recently, Surface Plasmon Resonance (SPR) technology has been used more frequently for fragment-based screening, due to its low protein consumption, its ability to test several thousands of compounds and to assess both binding affinity and stoichiometry of binding.
SPR can characterize the interaction of soluble proteins well but it is still limited for the analysis of ligand binding to membrane proteins. It can therefore be complemented with the use of Nuclear Magnetic Resonance (NMR), an orthogonal biophysical method that can detect target-ligand interactions with high sensitivity but that necessitates a high consumption of protein compared to other techniques.
For the first time, a research team led by Michael Hennig presented a SPR-based fragment screen of a peptide-binding G protein-coupled receptor, in combination with NMR, to identify, validate and subsequently characterize hit molecules. They used SPR as a primary method to screen 6369 compounds and identified 44 hits that were confirmed in competition as well as dose-response experiments.
Click here to download Bruker's brochure: "Everyday NMR – Why infer when you can be sure?"
To further increase the confidence into the SPR-confirmed hits, 4 out of the 8 selected fragments were validated using NMR spectroscopy. To carry out their MNR measurements, the team used a Bruker Avance 500 MHz high resolution spectrometer equipped with a MicroCryoProbe and a Bruker Avance III 600 MHz spectrometer, fitted with a TCI Probe, for optimized reliability and reproducibility.