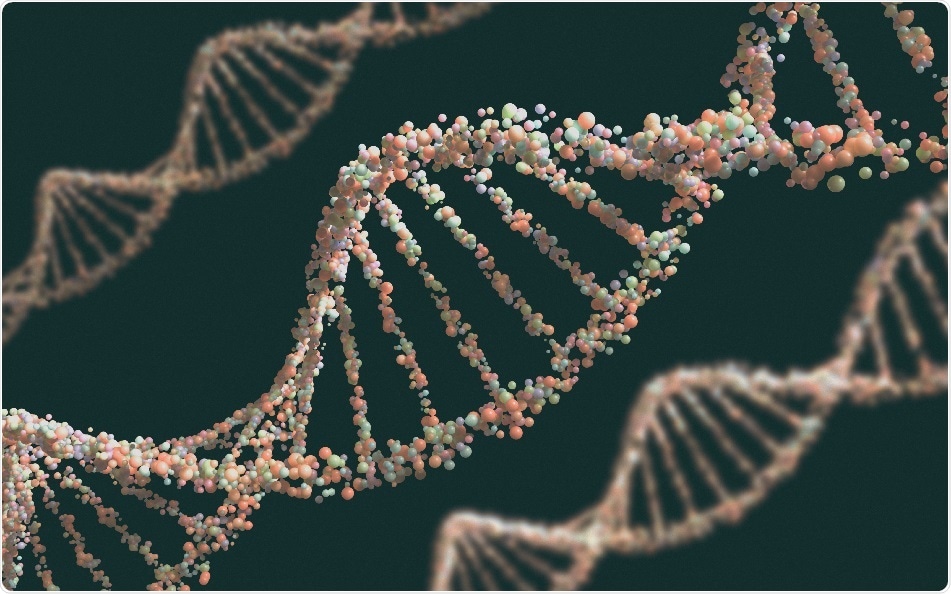 © ktsdesign / Shutterstock.com
Breast cancer is caused due to the complex interactions between our environment and a large number of genetic variants. The inherited component of the risk of breast cancer is a result of combination of rare variants in genes like BRCA2 and BRCA1 that confer higher increase in breast cancer risk, and numerous collective genetic variants conferring a smaller increase in risk.
Recently detected risk regions almost double the already known count, thereby making the number of commonly known variants linked with breast cancer to approximately 180.
The findings of the study are the result of research by the OncoArray Consortium, a huge attempt comprising 550 researchers from over 300 different organizations in six continents. In total, genetic data were analyzed from 275,000 women, of whom 146,000 had already been identified with breast cancer.

These findings add significantly to our understanding of the inherited basis of breast cancer. As well as identifying new genetic variants, we have also confirmed many that we had previously suspected. There are some clear patterns in the genetic variants that should help us understand why some women are predisposed to breast cancer, and which genes and mechanisms are involved."
Professor Doug Easton from the University of Cambridge, one of the lead investigators on the study.

By merging epidemiological data with other breast tissue data, the researchers were able to make possible predictions in most of the cases. Furthermore, for the first time, they affirmed that these genes are often the same as those that are modified in actual breast cancer cases. The DNA that exists within the tumor cells themselves mutate during the development of a tumor.
Most of the variants identified by OncoArray were not detected within genes, but rather found within the regions of the genome regulating the activity of neighboring genes. While observing the pattern of these genetic regions, researchers identified that this varied from the regions that are involved in predisposition of other common diseases.

These studies identified genetic regions specifically associated with either estrogen-receptor positive or estrogen receptor negative breast cancer, underscoring the fact that these are biologically distinct cancers that develop differently.
Approximately, 70% of all breast cancer cases are estrogen-receptor positive, indicating that the cancer cells contain a specific protein (known as a receptor) that responds to estrogen (female sex hormone), allowing the tumor to develop. Nevertheless, this receptor is not carried by all the cancer cells - these are called as estrogen-receptor negative.
Roger Milne, Associate Professor at Cancer Council Victoria in Melbourne stated that these findings may form enhanced risk prediction, both for the BRCA1 mutation carriers and the general population.  More efficient preventive treatments and interventions can be achieved through better understanding of the biological base of estrogen-receptor negative breast cancer.
The risk variants determined in the two studies are similar: while some are carried by more than half of all women, others are carried by only 1% of women. The risks described by each individual variant are uncertain; nevertheless, because they are common and their impacts multiply together, the collective effect is considerable. For instance, the researchers predicted that 1% of women have a breast cancer risk that is more than three times greater than the rest of the population.
The researchers trust that these dissimilarities may be satisfactory to change the way that women are tested for breast cancer. In many regions of the world, mammography is primarily offered to women from the age of 50; but screening can be offered at a lower age for women at a greater risk due to family history, and MRI can be offered to those specifically with high risk, which is more sensitive.
Professor Jacques Simard of Université Laval, Quebec city, Canada stated that utilizing information from genomic studies, combined with data on other risk factors that are already known, will enable better assessment of breast cancer, therefore aiding the detection of a small but important proportion of women at a higher breast cancer risk.
These women may gain from more rigorous screening, initiating at a younger age, or utilizing more sensitive screening methods, enabling prevention and early identification of the disease. Meanwhile, this customized information will also be valuable to adapt screening modalities for women with considerably lower risk.
Source:
https://www.eurekalert.org/pub_releases/2017-10/uoc-mso101917.php
Publicado por salud equitativa en 15:33