By Dr Ananya Mandal, MDOctober 19, 2017
According to new research, people can be aware that they are dead after their heart has stopped beating. This suggests that the brain and consciousness seems to work even after the body has stopped working. Dr Sam Parnia, director of critical care and resuscitation research at NYU Langone School of Medicine in New York City, and his team looked at people who had cardiac arrest and then were successfully resuscitated back to life. 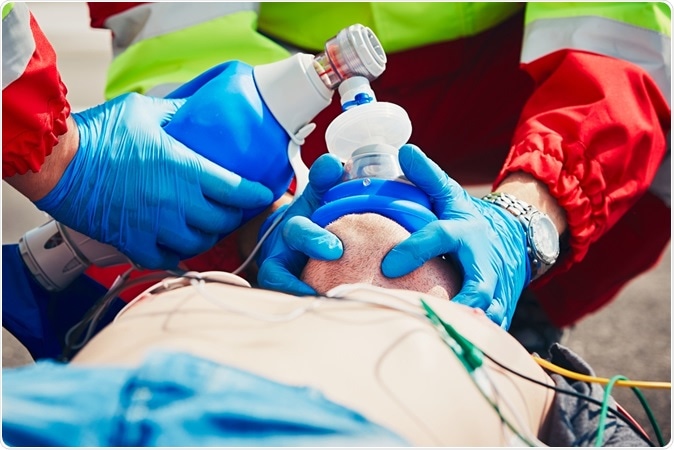 Cardiopulmonary resuscitation. Image Credit: Jaromir Chalabala / Shutterstock
Their study was published in the latest issue of the journal Resuscitation.
The team looked at near-death-experiences (NDEs) of 2060 patients included in the study. Of these, 330 individuals had survived a resuscitation effort. Among these 140 patients could complete a questionnaire that shed light on what happens when the heart has stopped functioning and the brain still works. Earlier much of these reports of near death experiences of seeing flashes of light and tunnels of light etc. were mostly anecdotal in nature. This is the first and largest study that shows exactly what happens during this critical time despite a large proportion of patients who are being successfully revived after crashing due to advances in medicine.
The study called AWARE that dealt with awareness during resuscitation reveals that patients having these near-death-experiences may even hear their own deaths being declared by doctors. The researchers asked and analyzed several questions regarding the true mental experiences of these patients and managed to distinguish them from the hallucinations that could be commonly seen among these patients. The 140 surviving patients completed the interviews and recalled the events occurring during their near-death-experience.

Results showed that 39 percent of the patients had some form of awareness before their resuscitation could begin and after their hearts had stopped beating. Several patients recalled feeling either peaceful, or fearful and being dragged under water.
One third of the patients reported exaggerated slowing or speeding up of time. Bright lights and illusions were also reported by the patients. Memories of the time seem to fade away quickly. A substantial number of individuals reported having full awareness of what was happening around them, the resuscitation efforts and the conversations. The details they revealed could be matched to the doctors and nurses who were part of the resuscitation team.
According to Dr. Sam Parnia, death is defined as the time when the heart has stopped beating. The blood from the heart then fails to reach the brain to sustain it. This means all the reflexes of the base of the brain including “gag reflex” or “pupil reflex in the eyes” are all lost almost instantaneously. But this study reveals that brain energy may not be completely depleted.
The cerebral cortex of the brain, Parnia explained, that is responsible for thinking and processing the information from the five senses, also shows no activity within 2 and 20 seconds of the heart stopping. No brain waves can thus be detected there. This starts the slow death of the brain cells. But the actual time to complete brain death may take hours after the heart has stopped he added.
Source:
http://www.resuscitationjournal.com/article/S0300-9572(14)00739-4/abstract
Publicado por salud equitativa en 8:29