Microarray or biochip is a lab-oriented microscope slide that is usually made of glass, silicon chip, or nylon membrane. It is a 2D array (sometimes 3D) whose surface is provided with thousands of minute pores in defined positions.
The microarray is a recently developed technology and was discovered only two decades ago. It is mostly used in cancer research and in the pharmacological treatment of other diseases like oral lesions. It enables researchers to investigate and analyze the expression of thousands of genes in a single reaction and address various issues. 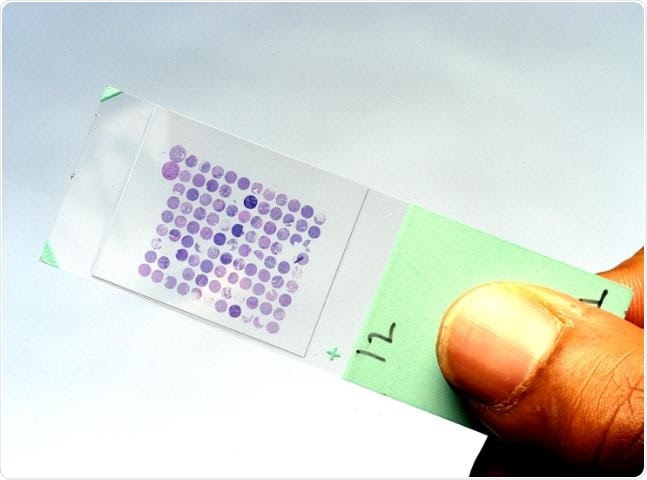 A Tissue MicroArray Slide.
Source: http://tmalab.jhmi.edu Copyright: Johns Hopkins Tissue MicroArray Lab
This technology works under the principle of binding (also called hybridization) strands of complementary sequences of DNA (cDNA) with each other. Microarray has two broad classifications, based on its mode of preparation and on the types of probes used.

Classification of microarray based on the mode of preparation

Based on the mode of preparation of the array, microarrays are divided into three types:

Classification of microarray based on the types of probes used

Based on the types of probes used, microarrays are of twelve different types:
Reviewed by: Dr Tomislav Meštrović, MD, PhD