By Afsaneh Khetrapal BSc (Hons)
Coriander (cilantro) leaves are used as a flavoring agent in varied cuisines. However, this popular herb has divided people into two camps—those who like it and those who do not.
Coriander lovers say it has a fresh citrus taste with a strong aroma, while the haters say it has a soapy taste and a pungent smell. About 14–21% of people of East Asian, African, and Caucasian origin dislike coriander, while only 3–7% of people of South Asian, Hispanic, or Middle Eastern origin dislike it. The environment or culture in which one grows up could be a reason for this, as an environment is known to have a significant effect on the number of cells that are able to identify each smell or taste. 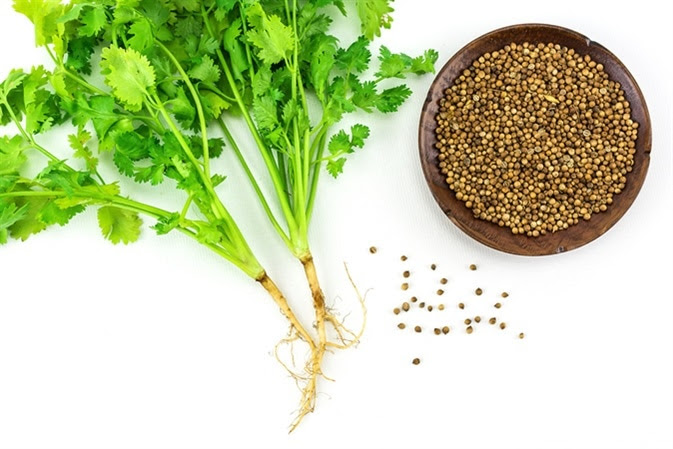 Taste, Smell and Their Overlap

Taste and smell are two senses that are closely linked together even though they have individual receptor organs. Special sensory cells that are present in the taste buds detect Tastants (food chemicals). During the simulation, the sensory cells transmit the signals to corresponding parts in the brain thus making us conscious on the taste perception.
Generally, the word “taste” is used in describing the sensations that rise from the mouth. But according to science, taste or gustation is used only for such sensations that are received by a chemosensory gustatory system which is anatomically as well as physiologically specialized for the purpose.
Along with this sensation, food also evokes another feeling like temperature, odor, touch and irritation simultaneously. Even though these non-gustatory senses are received by various other cells like olfactory and somatosensory cells, it is often difficult to separate them. A neural response is initiated while the receptor proteins found on the hair like structures called cilia that are present on the sensory cells are stimulated by the odorants. Thus, the messages on taste and smell reach the brain together and one detects food flavor.

The aroma and flavor compound S-Linalool, a naturally occurring chemical in scented plants, is also a major component of the oils found in coriander.  More than 60% of perfumed cleaning agents and hygiene products contain linalool. In addition to that, pest professionals use it in the preparation of insecticides. Some mosquito repellent products also make use of linalool. This could be one reason why some people associate the soapy taste to coriander.
Coriander also has some aldehydes that are found in soaps, detergents, and lotions as well as the bug family of insects. Soap has a taste of sodium fluoride. These aldehydes, mainly (E)-2-alkenals and n-aldehydes, are responsible for the soapy taste in coriander.
These combinations of chemicals do not fit a familiar food experience in the brain but fit into a pattern that involves cleaning agents and dirt, or crawly insects, and signals to the brain that coriander is a food that tastes like soap.

The reason behind the divisive flavor of coriander lies in our genes. There is a genetic component to coriander taste perception. This perception is believed to be a result of an enzyme that changes the way one senses the taste of coriander—a genetic trait that is still being researched upon.
The leaves of the coriander have a citrus taste. Receiving taste qualities that humans describe as sweet, umami, and bitter involves sensory organs called taste receptors.
There exist various taste qualities. For each of this quality, there will be a unique coding mechanism which will be mediated by certain specialized taste receptors. Genetic differences in many of these receptors are also known to play a role in how we perceive tastes and smells. Individual differences in taste have been attributed to allelic variants of the taste receptor genes.
The human tongue contains structures called taste buds within which are larger structures called papillae, whose density on the tongue varies from person to person; people with higher papillae densities and a higher concentration of these protein receptors (or variations of these) may be more sensitive to certain tastes and describe them as soapy or rotten.
Several studies have been done throughout the world to find out the genetics behind the difference in taste perception of coriander leaves. Through these studies, scientists were able to point out the fact that most cilantro haters shared a particular group of olfactory receptor genes called as OR6A2 that has the capacity to identify the smell of aldehyde chemicals that are present in coriander leaves as well as soaps. Single-nucleotide polymorphism (SNP) conducted during the studies found that these genes have a high binding specificity for several aldehydes that give cilantro its characteristic odor. Thus, it was concluded that OR6A2 may be the olfactory receptor which contributes to the identification of soapy smell and in turn serves as the root for the soapy taste of cilantro leaves.