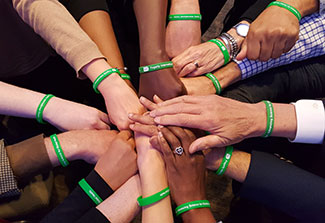 Photo courtesy of Dr. Roger I. Glass/Fogarty
Fogarty grantees showed their support by donning green
bands during the 2017 Consortium of Universities for Global
Health annual meeting.
Rousing applause and a standing ovation for Fogarty kicked off the recent Consortium of Universities for Global Health annual meeting held in Washington, D.C. In opening remarks, CUGH board chair Dr. Pierre Buekens, of Tulane University, told the 1,700 attendees that Fogarty has been an important champion for global health around the world.
NIH leaders discussed their research priorities during a plenary session moderated by Fogarty Director Dr. Roger I. Glass. Early in his tenure as director of the National Institute of Allergy and Infectious Diseases (NIAID), Dr. Anthony S. Fauci said he appreciated the globality of infectious diseases and set out to organize his institute accordingly.
"Global health is integral to really everything we do at NIAID," Fauci said. Underpinning the success of the research his institute funds in low- and middle-income countries (LMICs) is the local scientific expertise cultivated by Fogarty. "If you look at the public health leaders in the developing nations throughout the world," he said, "it's stunning how many were Fogarty trainees at one time in their career."

Photo courtesy of CUGH
During the CUGH meeting, a panel of NIH leaders explored future
directions in global health research. From left, Fogarty's
Dr. Roger I. Glass; Acting NCI Director Dr. Doug Lowy, NIAID Director
Dr. Anthony S. Fauci, NIMH global health director Dr. Pamela Collins and
NHLBI Director Dr. Gary H. Gibbons.
The global health agenda has expanded to include mental health, which poses a large and growing burden, said Dr. Pamela Collins, who directs the global mental health portfolio at the National Institute of Mental Health (NIMH). "What we learn in varied contexts and populations can also benefit us at home."
Dr. Doug Lowy, acting director of the National Cancer Institute (NCI), echoed that sentiment. An NCI trial of the HPV vaccine conducted in Costa Rica indicates that a single dose is sufficient to ward off cancer, which will result in huge savings globally, as well as in the U.S., where three doses had previously been recommended.
Having grown up with a global perspective, Dr. Gary Gibbons, director of the National Heart, Lung and Blood Institute (NHLBI), says he is looking to see where NHLBI can be the most catalytic. He believes there are numerous research opportunities in LMICs, including studying the impact of the growing popularity of a Western diet on heart disease, environmental exposures that effect lung development in children, sickle cell disease and others. 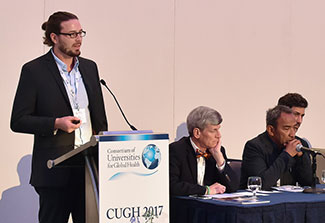 The Fogarty Fellows and Scholars program was highlighted
in a session at CUGH. 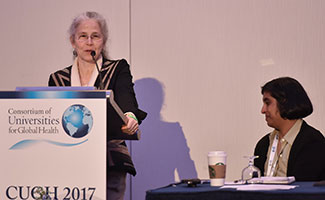 Photos courtesy of CUGH
Dr. Judith N. Wasserheit, of the University of Washington
(left), spoke at a panel on implementation science, organized
by Fogarty's Nalini Anand (right).
Another conference session showcased the Fogarty Fellows and Scholars program, which provides early-career scientists with a year-long mentored research experience in a low-resource setting where there are active NIH-funded projects.
Dr. Hod Tamir, of ICAP-Columbia University, spent his Fogarty fellowship studying the impact of social networks on women living with HIV in India. "It can't be overstated what a wonderful impact this fellowship has had on my career, providing a bridge to this world that is so meaningful, with so many people from so many walks of life and with so many different areas of expertise," he said. "It's just incredible."
Fogarty's policy office director, Nalini Anand, organized a panel discussion on implementation science and the critical role it plays in moving research advances into policy and practice. Dr. Judith N. Wasserheit, of the University of Washington, said implementation science is "high impact" but its value is only beginning to be appreciated. She discussed the growing attention devoted to the topic, including conferences, publications and curricula devoted to nurturing this emerging field.
Wasserheit acknowledged the leadership role Fogarty has played in this arena. Anand agreed, noting "over the last 10 to 15 years, implementation science has really taken root and grown across the NIH."