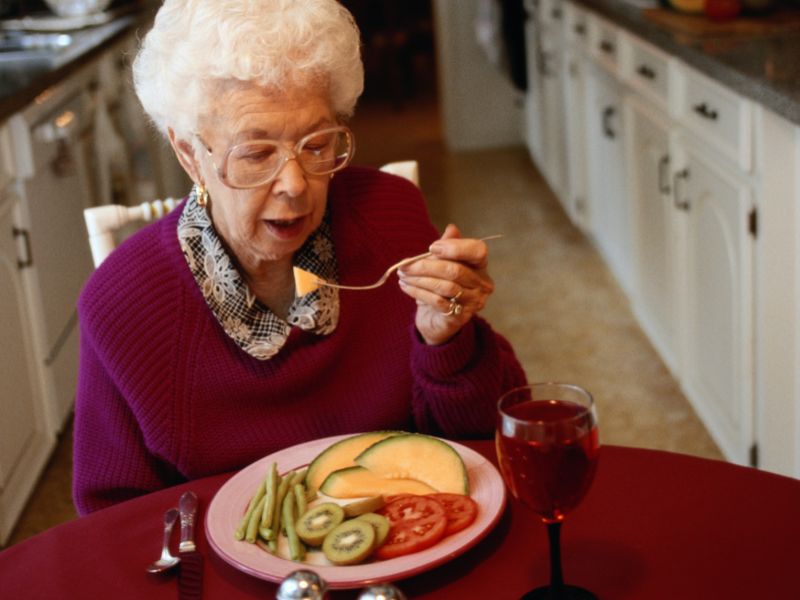 WEDNESDAY, July 12, 2017 (HealthDay News) -- Middle-aged and older adults who start eating better also tend to live longer, a large new study shows.
The findings, reported in the July 13 issue of the New England Journal of Medicine, might not sound surprising. Health experts said they basically reinforce messages people have been hearing for years.
But the study is the first to show that sustained diet changes -- even later in life -- might extend people's lives, the researchers said.
"A main take-home message is that it's never too late to improve diet quality," said lead researcher Mercedes Sotos-Prieto, a visiting scientist at the Harvard School of Public Health, in Boston.
"Most participants in our study were 60 years or older," she noted.
The findings are based on nearly 74,000 U.S. health professionals who were part of two long-running studies that began in the 1970s and 1980s.
Between 1998 and 2010, almost 10,000 of those study participants died. Sotos-Prieto and her team looked at how people's risk of early death related to any diet changes they'd made in the previous 12 years (1986 to 1998).
It turned out that people who had changed for the better -- adding more fruits and vegetables and whole grains, for example -- had a lower risk of premature death than those whose diets stayed the same.
In contrast, people who let their eating habits slide faced a higher risk of dying during the study period -- 6 percent to 12 percent higher -- compared to stable eaters, the findings showed.
How much of a difference did diet improvements make?
It varied a bit based on the measure of diet quality. The researchers used three scoring systems: the Alternate Healthy Eating Index; the Alternate Mediterranean Diet score; and the DASH (Dietary Approaches to Stop Hypertension) diet score.
The scoring systems differ somewhat, but all give more points to foods such as vegetables, fruit, whole grains, fish, low-fat dairy and sources of "good" fats, such as olive oil and nuts. Processed foods, sweets, red meat and butter, meanwhile, get lower ratings.
Overall, the study found, a 20-percentile improvement in diet quality was linked to an 8 percent to 17 percent decrease in the risk of early death from any cause. There was a similar dip in the risk of dying from heart disease or stroke, specifically.
That 20-percentile shift is a fairly minor change, according to Sotos-Prieto.
Swapping out one daily serving of red meat for one serving of legumes or nuts, for example, would do the trick, she said.
"Our results underscore the concept that modest improvements in diet quality over time could meaningfully influence mortality risk," Sotos-Prieto said.
Alice Lichtenstein is a spokeswoman for the American Heart Association and a professor of nutrition science at Tufts University, in Boston.
"This study reinforces what we've been saying for a long time," she said.
Ideally, healthy eating is a lifelong habit. But you're never "too old" to make changes for the better, Lichtenstein noted.
"The key is to make changes that you can stick with for the rest of your life," she stressed.
There are no magic-bullet foods or nutrients, Lichtenstein added. Instead, the new study "validates" the concept that it's overall diet that matters, she explained.
Connie Diekman, a registered dietitian, agreed. A general guide, she said, is to start eating more plant foods.
When people do eat meat, Diekman suggested choosing leaner cuts.
"Shifting one meal from meat and potatoes to sauteed veggies, quinoa and a topping of grilled chicken or lean flank steak would be one way to move to a healthier eating pattern," said Diekman, head of university nutrition at Washington University in St. Louis.
The good news, according to Lichtenstein, is that it is getting easier to eat healthfully. She said Americans generally have more access to a variety of whole grains and fruits and vegetables -- fresh or frozen, which can be more economical.
SOURCES: Mercedes Sotos-Prieto, Ph.D., Harvard T.H. Chan School of Public Health, Boston, and assistant professor, food and nutrition science, Ohio University, Athens, Ohio; Alice Lichtenstein, D.Sc., spokesperson, American Heart Association and professor, nutrition science and policy, Tufts University, Boston; Connie Diekman, M.Ed., R.D., director, university nutrition, Washington University, St. Louis; July 13, 2017, New England Journal of Medicine
HealthDay
Copyright (c) 2017 HealthDay. All rights reserved.
News stories are written and provided by HealthDay and do not reflect federal policy, the views of MedlinePlus, the National Library of Medicine, the National Institutes of Health, or the U.S. Department of Health and Human Services.