During November–December 2015, as part of the 2015 cholera outbreak response in Iraq, the Iraqi Ministry of Health targeted ≈255,000 displaced persons >1 year of age with 2 doses of oral cholera vaccine (OCV). All persons who received vaccines were living in selected refugee camps, internally displaced persons camps, and collective centers. We conducted a multistage cluster survey to obtain OCV coverage estimates in 10 governorates that were targeted during the campaign. In total, 1,226 household and 5,007 individual interviews were conducted. Overall, 2-dose OCV coverage in the targeted camps was 87% (95% CI 85%–89%). Two-dose OCV coverage in the 3 northern governorates (91%; 95% CI 87%–94%) was higher than that in the 7 southern and central governorates (80%; 95% CI 77%–82%). The experience in Iraq demonstrates that OCV campaigns can be successfully implemented as part of a comprehensive response to cholera outbreaks among high-risk populations in conflict settings.
As of 2015, ≈3.2 million internally displaced persons (IDPs) were dispersed throughout Iraq due to increased activity by an armed antigovernment group and subsequent counter-insurgency operations by the Iraq government and coalition forces, and Iraq was hosting >200,000 Syrian refugees due to protracted fighting in Syria between the government and several opposition groups (1). The risk of communicable disease epidemics in Iraq is heightened due to the large numbers of displaced populations residing in camps, informal settlements, or temporary placement sites (collective centers). These sites are usually overcrowded and have inadequate shelter arrangements and limited access to sanitation facilities, safe drinking water, safe food, and basic healthcare services. Such risk factors, coupled with austerity measures and the effect of those measures on health services, have contributed to transmission of cholera in Iraq.
On August 30, 2015, cholera was confirmed in Iraq’s southern governorate, Diwaniya, and on September 15, an outbreak was declared by the Iraq Ministry of Health (MoH); activation of the Cholera Control and Command Center followed the outbreak declaration. The outbreak continued to rapidly spread throughout the country, and by October 2015, a total of 1,656 laboratory-confirmed cases of Vibrio cholerae 01 Inaba had been reported from 15 of 18 governorates; 1,000 (60%) of these cases were reported in Babylon and Baghdad, which are in southern and central governorates.
Oral cholera vaccines (OCVs) are recommended by the World Health Organization (WHO) as a complementary strategy for comprehensive cholera prevention and control in addition to the primary intervention of safe water, sanitation, and hygiene (WaSH) measures. Three OCVs are currently prequalified by WHO: Dukoral, Shanchol, and Euvichol (2,3). In early 2013, a global OCV stockpile was established with initial support from several donors and endorsed for funding support through Gavi, the Vaccine Alliance (4). The stockpile, which is intended to provide rapid deployment of OCVs in emergency and outbreak situations, is managed by the International Coordinating Group that comprises 4 decision-making partners: the International Federation of Red Cross and Red Crescent Societies; Médecins Sans Frontières; United Nations Children’s Fund; and WHO, which also serves as the Secretariat (5,6).
When the 2015 cholera outbreak began in Iraq, the Iraq MoH and implementing partners immediately began planning a vaccination campaign using the bivalent OCV Shanchol (7–9) to complement WaSH and other cholera control measures. The 2-dose OCV campaign targeted ≈255,000 persons >1 year of age living in selected refugee camps, IDP camps, and collective centers because of increased vulnerability to cholera due to living conditions. This deployment of ≈510,000 OCV doses in Iraq was the largest to date from the global OCV stockpile for outbreak and humanitarian response. As part of the recommended monitoring and evaluation activities for these deployments, the MoH requested partners to conduct a vaccination coverage survey to evaluate vaccine uptake, OCV campaign awareness, reasons for vaccine acceptance or nonacceptance, and any adverse events reported after the campaign. We report results of the coverage survey and key lessons learned from the Iraq experience.

Because of the large numbers of IDPs and the limited supply of OCV, the vaccination campaign in Iraq was limited to IDP camps at full capacity or overcrowded and to all refugee camps and collective centers. The OCV campaign was conducted during October 31–November 5, 2015 (round 1), and December 7–9, 2015 (round 2). Campaign dates were chosen beyond the 2-week minimum interval between OCV doses to accommodate a polio vaccination campaign that was conducted between the 2 OCV campaign rounds. Vaccination teams were trained by WHO and MoH staff and composed of at least 1 vaccinator, recorder, and crowd controller. Experiences from the polio vaccination teams and infrastructure supported the implementation of this campaign during a public health emergency. Vaccination strategy included a combination of fixed sites (i.e., large health centers) and mobile teams for door-to-door vaccine delivery. The vaccine cold chain was maintained, and vaccines were transported using a sufficient number of vaccine carriers and ice packs for a door-to-door strategy. The coverage survey was conducted during December 14–16, 2015, immediately after the second round of the campaign, by WHO, the US Centers for Disease Control and Prevention, and the Iraqi Red Crescent Society.

We designed a stratified multistage cluster survey to obtain representative OCV coverage estimates among selected camps in Iraq’s governorates that were targeted during the 2015 campaign. The sampling universe was stratified first by governorate and then by refugee camp, IDP camp, or collective center within a governorate. Within each household, all persons in each of 3 designated age groups (1–4, 5–14, and >15 years of age) were interviewed.
We performed sample size calculations based on an estimated 2-dose coverage of 75%, an intraclass correlation of 0.2, an average household size of 6, and a nonresponse rate of 5%. Based on these assumptions, we estimated a design effect of 2 due to household clustering. To achieve 8% precision in the group of 1- to 4-year-old children for the northern and southern/central regions, we estimated that ≈120 households per governorate would need to be sampled and allocated the sample equally to each governorate. We expected to yield a coverage estimate with a precision of 4.7% for each governorate.
Within each governorate, we proportionally allocated our sample based on the estimated population size of each refugee camp, IDP camp, or collective center. For logistical reasons, we excluded camps that had a population of <500 10="" 27="" 2="" 35="" 3="" 7="" a="" access="" addin="" ahuk="" ajaf="" all="" anbar="" and="" babil="" baghdad="" but="" camps="" centers="" central="" challenges="" collective="" concerns="" due="" eligible="" erbil="" for="" governorates="" idp="" in="" issues="" karkh="" kerbala="" largest="" logistical="" northern="" of="" only="" overall="" p="" persons.="" refugee="" region="" regions.="" regions="" salah="" sampling="" security="" selected.="" selected="" southern="" sulaymaniya="" survey="" the="" this="" to="" total="" wasit="" we="" were="">
Within a selected camp, the allocated numbers of households were systematically sampled using a predetermined skip interval, which we calculated as the estimated number of households in the camp divided by the proportionally allocated sample size. Survey teams used a start, selected randomly between the first household at the corner of the camp and the nth household, based on the predetermined sampling interval. Once the interview at the first household was completed, the interviewers moved on to the next household, based on the sampling interval. Selected households that were excluded because of ineligibility (if consent was not given or if no one was present at the household after 3 attempted visits) were counted toward the sample size per camp; that is, selected households were not replaced for nonresponse or refusal reasons. In camps or collective centers where population size was larger than estimated, the survey team continued to sample households using the predetermined skip interval.
In each selected household, all eligible persons were interviewed; for younger children, information was collected from parents or the primary caregiver. If any of the household members were absent during the first visit, teams attempted to revisit the household at least twice at a later time. Respondents were categorized by 3 age groups: 1–4 years, 5–14 years, and >15 years to match administrative recording via tally sheets for the campaign and to align with data from previous campaigns in other settings (9–12). All data were collected using the Survey123 application (Esri, Redlands, CA, USA) installed in electronic tablets for real-time data entry and global positioning system (GPS) tracking of survey teams. Electronic data entry and GPS tracking of survey teams were used to remotely monitor the spatial pattern of selected households and data quality during this humanitarian crisis in a complex security environment.

We selected 1,240 households in the targeted camps and collective centers to survey; 99% (1,226 households; 5,007 persons) participated. The governorate of Dahuk had the lowest household response rate (93%), followed by Erbil and Baghdad Karkh (99% each); the remaining 7 governorates all had a 100% response rate. Among 5,007 individual-level survey respondents in the 10 governorates, 51% were female, 10% were 1–4 years of age, 22% were 5–14 years of age, and 69% were >15 years of age (Table 1). The median number of residents per household was 4 (interquartile range 3–5). The governorate of Anbar did not report household-level questions and therefore was excluded from the household-level analysis. Overall, 12% of households reported using an unimproved primary water source, 36% reported using an unimproved secondary water source, and 4% reported having an unimproved sanitation facility (Table 1). Among all households, 22% reported sharing sanitation facilities with >4 other households, and 4% reported not having soap for handwashing. 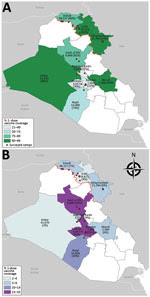 Reasons for Not Being Vaccinated

Most vaccine recipients reported having received information about the OCV campaign through television (19%), neighbors or friends (13%), radio (12%), health staff (7%), or posters or banners posted before or during the campaign (7%) (Table 5). In addition, 55% of respondents reported receiving other cholera prevention messages, such as handwashing (33%), thoroughly cooking food (14%), boiling water (15%), and washing vegetables and fruits (13%).

The material presented in this manuscript represents the joint work of US Centers for Disease Control and Prevention and WHO staff based in Iraq and would not have been possible without the assistance of teams from the Iraq Red Crescent Society and the Iraq Ministry of Health. We would also like to thank Pierre Vernier for his assistance in creating the electronic version of the coverage survey.
This coverage survey was funded by WHO.