Hard labor might be the very thing we try to avoid on Labor Day. But our cells and their components don’t have the luxury of taking a day off. Their non-stop work is what keeps us going and healthy.
Scientists often compare cells with small factories. Just like a factory, a cell contains specialized compartments and machines—including organelles and other structures—that each play their own roles in getting the job done. In the vignettes below, we give a shout out to some of these tireless cellular workers.
Energy Generators 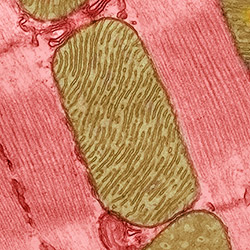 Mitochondria are the cell’s power plants. They convert energy from food into a molecule called ATP that fuels virtually every process in the cell. As shown here, mitochondria (brown) often have distinct, oblong shapes. Like most other organelles, mitochondria are encased in an outer membrane. But they also have an inner membrane that folds many times, increasing the area available for energy production. In addition, mitochondria store calcium ions, help make hemoglobin—the vital iron-containing protein that allows red blood cells to carry oxygen—and even take part in producing some hormones. Defects in mitochondria can lead to a host of rare but often incurable diseases that range from mild to devastating. Researchers are studying mitochondria to better understand their manifold jobs in the cell and to find treatments for mitochondrial diseases.
Protein Producers 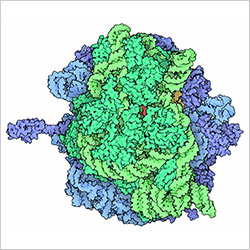 Ribosomes are complex machines made up of more than 50 proteins and three or four strands of genetic material called ribosomal RNA (rRNA). The busy cellular machines make proteins, which are critical to almost every structure and function in the cell. To do so, they read protein-building instructions, which come as strands of messenger RNA. Ribosomes are found in all forms of cellular life—people, plants, animals, even bacteria. This illustration of a bacterial ribosome was produced using detailed information about the position of every atom in the complex. Several antibiotic medicines work by disrupting bacterial ribosomes but leaving human ribosomes alone. Scientists are carefully comparing human and bacterial ribosomes to spot differences between the two. Structures that are present only in the bacterial version could serve as targets for new antibiotic medications.
Assembly-Line Worker 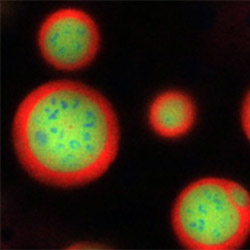 The most obvious feature in many cells is the nucleus. Within the nucleus is a tiny structure called a nucleolus, which has the key job of constructing the rRNA for ribosomes. Ever poised and ready to chip in on a busy assembly line, the nucleolus positions itself on a section of DNA within a chromosome that has the instructions for making rRNA. The rRNAs pass through distinct areas in the nucleolus as they’re processed. Recent research has shown that the nucleolus’ compartments spontaneously self-organize to form this organelle because proteins that make up the nucleolus are like oil and water—they stay separate, creating distinct areas (blue, lime and red in the image) needed for proper function. Researchers study the nucleolus because, besides making ribosomes, it also checks the levels of proteins that control a cell’s growth. In some diseases, like cancer and heart disease, nucleoli are malfunctioning and lead to abnormal cell growth. Scientists are trying to find the causes of these aberrations and design treatments that restore normal nucleolus function.
Support Beams and Transport Tracks 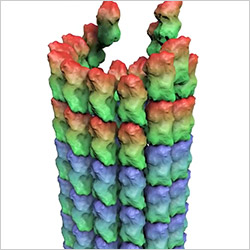 While scientists are discovering new roles for mitochondria, nucleoli and other organelles, they already know that microtubules perform many tasks in the cell. Microtubules are long, hollow cylinders made up of many stacks of the protein tubulin. They serve as scaffolding or support beams that help cells stay in shape. They also hold other organelles in place. They form the sturdy tracks on which countless molecules and materials shuttle to and fro. They push and pull chromosomes into place during cell division. Microtubules do their jobs—and manage to switch tasks—by growing and shrinking. To do so, they add or remove tubulin molecules, as shown in this downloadable video. Scientists have also shown that the anticancer drug taxol paralyzes cancer cells by promoting microtubule polymerization, thereby blocking the growth and shrinking of microtubules required for cell division. This discovery might help researchers improve on taxol and other anticancer drugs that act affect microtubules in a similar way.
Trash Recycling A barrel-shaped molecular machine in the cytoplasm called the proteasome recycles proteins and helps keep cells clean and running smoothly. It breaks down damaged or unneeded proteins into their amino acid building blocks, which the cell can then reuse. As shown in this video

(downloadable version), a protein targeted for destruction is threaded into the proteasome’s interior to be chopped up into its constituent pieces. In diseases like Alzheimer’s, excess damaged proteins accumulate in and around cells. Researchers are aiming to better understand what causes proteasomes to malfunction and whether there are ways to fix these molecular machines when they break down.
Wraparound Network 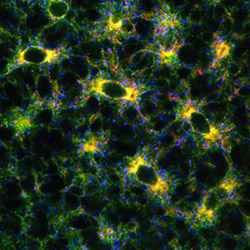 The endoplasmic reticulum (ER) is another multitasking organelle. It produces lipids—the fatty molecules found in cell membranes and other structures—and neutralizes toxins. It also provides a perch for ribosomes to make proteins that then enter the ER to be shunted to their destinations. The ER has traditionally been depicted as a series of interconnected tubes and flattened sacs in the cell. However, imaging studies have reported that the ER wraps around other structures as it extends throughout the cell. This photograph illustrates that observation. It shows cells containing colored dyes that mark the location of the ER. Other studies have revealed that the ER triggers mitochondria to divide when needed and serves as a storage depot for calcium and specific enzymes. When the ER isn’t working properly, misfolded proteins build up in the cell and can lead to neurological disorders, such as Alzheimer’s disease and multiple sclerosis. Scientists are investigating the ER to unveil more of its cellular roles and to help find treatments to correct ER dysfunctions that cause diseases.
Mitochondria image: Thomas Deerinck, National Center for Microscopy and Imaging Research; ribosome image: David S. Goodsell and the RCSB PDB; nucleus image: Nilesh Vaidya and Clifford Brangwynne, Princeton University; microtubules image: Eva Nogales lab, University of California, Berkeley; proteasome image: Andreas Martin, HHMI; endoplasmic reticulum image: Andrea Daga, Eugenio Medea Scientific Institute (Conegliano, Italy).
Publicado por salud equitativa en 3:30