Our Complicated Relationship With Viruses 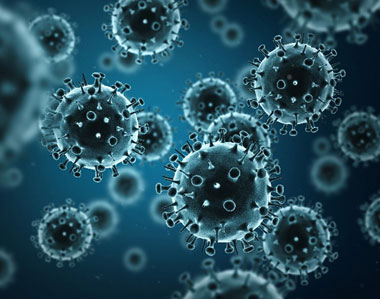 Nearly 10 percent of the human genome is derived from the genes of viruses. Credit: Stock image.


When viruses infect us, they can embed small chunks of their genetic material in our DNA. Although infrequent, the incorporation of this material into the human genome has been occurring for millions of years. As a result of this ongoing process, viral genetic material comprises nearly 10 percent of the modern human genome. Over time, the vast majority of viral invaders populating our genome have mutated to the point that they no longer lead to active infections. But they are not entirely dormant.
Sometimes, these stowaway sequences of viral genes, called “endogenous retroviruses” (ERVs), can contribute to the onset of diseases such as cancer. They can also make their hosts susceptible to infections from other viruses. However, scientists have identified numerous cases of viral hitchhikers bestowing crucial benefits to their human hosts—from protection against disease to shaping important aspects of human evolution, such as the ability to digest starch.
Protecting Against Disease
Geneticists Cedric Feschotte

at the University of Utah have discovered that ERVs lodged in the human genome can jump start the immune system.
For a virus to successfully make copies of itself inside a host cell, it needs molecular tools similar to the ones its host normally uses to translate genes into proteins. As a result, viruses have tools meticulously shaped by evolution to commandeer the protein-producing machinery of human cells. 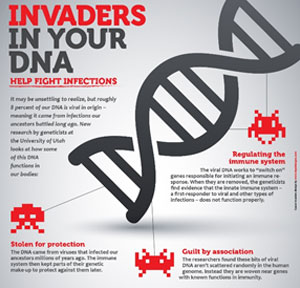 . Credit: Cedric Feschotte and Nels Elde, University of Utah.
Feschotte and his team recognized that because viruses tend to attack the immune system, they may be particularly adept at manipulating immune system genes. Ancient human genomes may have evolved in response. Feschotte believes it is possible that the genomes of humans (or our ancient ancestors) repurposed viral DNA for their own defense, using it to spur the immune system into action against viruses and other foreign invaders.
“We hypothesized that these ERVs were likely to be primary players in regulating immune activity because viruses themselves evolved to hijack the machinery to control immune cells,” says Feschotte.
To investigate their hypothesis, Feschotte and his team used a gene-editing technique called CRISPR to systematically eliminate individual ERV sequences in human cells. After removing one of the sequences, the researchers observed a notable weakening of immune function when the cells were challenged by viral infection. The removal of three other ERV sequences also compromised the immune response.
These findings suggest that each of these ERV elements can activate different gene components of the immune system. The team believes there are thousands more ERV sequences with similar regulatory activities, and it hopes to explore them systematically in future studies.
“We think we’ve only scratched the surface here on the regulatory potential of ERVs,” says Feschotte.
Underscoring the complicated relationship humans have with viruses, strong evidence also exists that in some cases ERVs cause cancer but in other cases they protect against cancer. For example, an ERV called ERV9 can detect cancer-related damage in the DNA of cells in the testis. ERV9 then prompts a neighboring gene to induce the damaged cells to commit suicide. This protective mechanism ensures that the cancer cells will not spread.
Shaping Human Evolution
Scientists have also discovered that viral intruders have driven the evolution of human physiological functions ranging from early development to digestion.
Nearly 20 years ago, scientists identified an ERV-derived gene called syncytin that appears to play a key role in the development of the human placenta. Syncytin originated from a retroviral gene encoding a protein that is embedded in the outer surface of a virus. This protein mediates the fusion of the virions with the host cell membrane, thereby facilitating viral infection. In a remarkable turn of events, the human body has repurposed the viral protein’s cell-fusing activities to promote the formation of the layer of cells that merge the placenta and the uterus.
Scientists have also found that viral invaders are critical to humans’ ability to digest starch. The insertion of an ERV near the human pancreatic gene for making amylase—a protein that helps humans digest carbohydrates—led to the expression of amylase in saliva. The consequent ability to digest starch in the mouth has had profound effects on the human diet, notably a shift toward eating foods like rice and wheat. By helping to kick start digestion in the mouth, amylase relieves some of the burden of breaking down food faced by the small intestine. If this critical enzyme were not excreted in saliva, the small intestine would have more difficulty metabolizing sugars and starches.
More recently, in 2016, a team of U.S. and Israeli researchers reported that a common strategy that host organisms use for nullifying viruses—bombarding them with mutations—has helped shape human evolution.

of Cornell University, in collaboration with Erez Levanon

from Bar-Ilan University, study a virus-fighting family of human enzymes called APOBECs. During periods when DNA unzips into two single strands—when it has been damaged, is in the process of being copied, or is being transcribed into RNA—the APOBEC enzymes seek out bits of viral DNA. They then systematically strafe the viral DNA—typically swapping many instances of one DNA base for another—in order to neutralize pathogens lurking within the host genome. 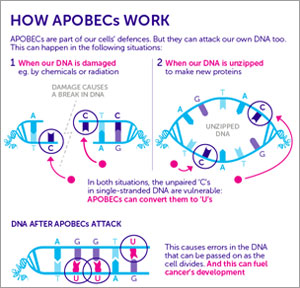 View larger image. Credit: Cancer Research UK.
It’s likely that this APOBEC mechanism has also mutated non-viral portions of the human genome. Keinan says the majority of these genetic changes would have done enough damage to cause disease. For the most part, such mutations have been weeded out of the population because they were harmful to survival and reproduction. However, researchers have increasingly linked APOBECs to various cancers.
Keinan’s team has shown that these mutations are also occurring in cells that develop into sperm and eggs and so they are inherited by future generations. And not all of the mutations have been detrimental. The genetic changes that survived through evolutionary time—the ones that did not lead to disease—are more likely to be beneficial. This insight suggests that the APOBEC anti-viral mechanism has helped shape primate evolution through a variety of yet-to-be-identified beneficial mutations. Keinan’s team has reported tens of thousands of such mutations in hominid genomes and is now searching for specific examples that led to changes in function that have contributed to human evolution.
While the search for additional examples of beneficial ERVs and antiviral mechanisms continues, scientists are learning more about viral trespassers with the help of large databases of genomic information from numerous species. They’re trying to figure out how viral DNA integrates into host genomes, how ERVs can jump from one host species to another and how to protect people in the case of these rare, but occasionally deadly, events.
This work was funded in part by NIH under grants R01GM114514, R01GM112972, R01GM059290, and R01GM108805.
Publicado por salud equitativa en 3:26