An exhibit called “Minerals in Medicine” opened at the NIH Clinical Center last month (see slideshow). The display features a fascinating overview of how dozens of minerals are used to create drugs and medical instruments useful in treating disease and maintaining health. The minerals ranged from commonplace ones like quartz, which is used to make medical instruments, to more exotic ones like huebnerite, a source of the metal tungsten, which is used in radiation shielding.
Inspired by this collection, which is co-sponsored by NIH and the Smithsonian Institution, we highlight here examples of “Metals in Medicine.”
Copper and Fat Metabolism

Fluorescent imaging of copper in white fat cells from mice. The left panel shows fat cells with normal levels of copper, and the right panel shows fat cells deficient in copper. Credit: Lakshmi Krishnamoorthy and Joseph Cotruvo Jr., University of California, Berkeley.
What does a metal like copper have to do with our ability to breakdown fat? Researchers explored this question by observing mice with Wilson’s disease—a rare, inherited condition that causes copper to accumulate in the liver, brain and other vital organs. The mice with the condition usually have larger deposits of fat compared to healthy mice. To confirm that fat metabolism is somehow compromised in these mice, the researchers treated them with a drug that induces the breakdown of fat. And indeed they found that less fat was metabolized in mice with the disease.
In an effort to investigate what role copper may be playing in fat metabolism, the researchers examined adipose tissue, or fat, cells under a microscope to track the metal’s interactions with various proteins in the cell. They discovered that copper inhibits an enzyme called PDE3. This enzyme usually prevents another enzyme called cAMP from helping to break down fat. The researchers concluded that copper actually promotes fat metabolism. This work shows that transition metal nutrients can play signaling roles, which has been previously thought to be restricted to alkali and alkaline earth metals like sodium, potassium and calcium.
Iron and Protection Against Pathogens

Transferrin molecules (light gray), each bound by two iron atoms (red), are captured by TbpA proteins (light blue) on the surface of a pathogenic bacterium (left). Illustration of an “iron pirate” map, with transferrin (top) binding to TbpA (right). Credit: Janet Iwasa, University of Utah.
Infectious bacteria can’t live without iron. To keep this essential nutrient away from pathogens, a human protein called transferrin tucks the metal away. This game of keep-away is one of many similar strategies referred to as “nutritional immunity,” in which the body protects itself by safeguarding its nutrients from foreign invaders. Some bacteria, such as those that cause meningitis, gonorrhea and sepsis, have evolved a counterattack. These pathogens produce a protein abbreviated TbpA that latches onto human transferrin to poach its iron.
Researchers have studied the DNA of transferrin from 21 primate species and the DNA of TbpA in dozens of bacterial strains. They found evidence that, over time, subtle changes in the structure of transferrin in primates, including humans, have mirrored changes in the structure of TbpA in pathogens, reflecting a primate-pathogen arms race over the control of iron stretching back more than 40 million years.
Zinc and Cancer Detection 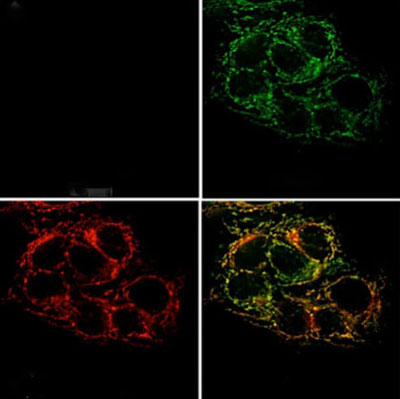 Microscope images of live cancer cells reflect low levels of zinc (top left), cells loaded with zinc (top right), the location of mitochondria (bottom left). An overlay of the zinc and mitochondrial locations shows zinc accumulating in mitochondria (bottom right). Credit: National Cancer Institute.
Zinc is found in every tissue of the body. The majority of the metal ion is tightly bound to proteins, helping them perform important biological functions. Tiny amounts of “mobile” zinc atoms not bound to proteins may be critical to the normal physiology of the brain, prostate and other organs. A new optical sensor that can track mobile zinc in the body has helped scientists demonstrate that zinc concentrations, normally high in the prostate, drop off dramatically in cancerous prostate cells. The researchers who developed the sensor think it could be used as an early diagnostic tool for prostate cancer.
As for zinc’s role in cancer, the metal ion is known to inhibit aconitase, an important enzyme in the normal metabolic pathway of cells. By restricting the concentration of zinc, the researchers speculate that cancerous cells are better able to catalyze the chemistry needed to meet the energy demands of the rapidly dividing cells.
Manganese and Brain Disease 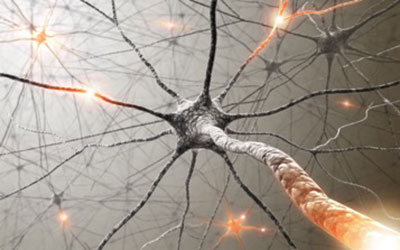 Excessive amounts of manganese in neurons can be toxic, leading to a variety of neurological diseases. Credit: Stock image.
Manganese is an essential partner for the proper function of a variety of enzymes. However, when not properly regulated, the metal ion contributes to numerous motor and psychiatric disorders, including neurodevelopmental toxicity, parkinsonism and Huntington’s disease. Compared to other metals in the body, little is known about how manganese levels are controlled.
Scientists recently screened more than 40,000 molecules to find those that could alter how much manganese would accumulate inside cells. Specifically, they wanted to know which molecules would change the levels of manganese in mouse striatal cells. These cells share similarities with neurons of the basal ganglia, a brain region that controls motor activity. The result of the screen was a collection of 41 molecules that scientists can now use as a starting point for discovering therapeutic agents.
NIH Clinical Center “Minerals in Medicine” Exhibit
Publicado por salud equitativa en 3:29