Using national surveillance data for 120,111 human anthrax cases recorded during 1955−2014, we analyzed the temporal, seasonal, geographic, and demographic distribution of this disease in China. After 1978, incidence decreased until 2013, when it reached a low of 0.014 cases/100,000 population. The case-fatality rate, cumulatively 3.6% during the study period, has also decreased since 1990. Cases occurred throughout the year, peaking in August. Geographic distribution decreased overall from west to east, but the cumulative number of affected counties increased during 2005−2014. The disease has shifted from industrial to agricultural workers; 86.7% of cases occurred in farmers and herdsmen. Most (97.7%) reported cases were the cutaneous form. Although progress has been made in reducing incidence, this study highlights areas that need improvement. Adequate laboratory diagnosis is lacking; only 7.6% of cases received laboratory confirmation. Geographic expansion of the disease indicates that livestock control programs will be essential in eradicating anthrax.
Anthrax is an acute infectious zoonotic disease caused by the gram-positive, aerobic, nonmotile bacterium Bacillus anthracis, which can survive in soil for decades as an extremely resistant form (spores) (1). Herbivores become infected when grazing on contaminated land, when bitten by Tabanid flies with contaminated mouthparts, or by ingesting contaminated feed (2). Naturally occurring human anthrax infections are caused by contact with infected animals or animal products; ingestion of undercooked infected meat; or exposure to large-scale processing of contaminated hides, wool, and hair in enclosed factory areas (3). Injection anthrax has been observed in users of contaminated heroin in western Europe (4).
Although there has been a general decrease in the number of anthrax outbreaks in animal populations and in human cases, anthrax still has a nearly worldwide distribution, causes an estimated 20,000–100,000 cases annually, and poses a major public health threat in regions of the Middle East, Africa, central Asia, South America, and Haiti (5). In addition, B. anthracis is always placed high on the list of potential agents with respect to biologic warfare and bioterrorism because of its robust nature and persistence of spores, the ability of aerosolized spores to readily infect by inhalation, and the high mortality rate for resultant anthrax cases (6). B. anthracis was used in this context in the anthrax letter events in the United States during 2001 and showed severe consequences (7).
Anthrax has probably been present in China for >5,000 years as recorded in ancient Chinese medical books, but few reliable data were available before the People’s Republic of China was founded (8). Human anthrax was made a reportable disease in China during the 1950s. Over the past 60 years, great progress has been made in control and prevention, including development of human anthrax vaccine in China during the late 1950s and eradication of anthrax in industrial areas during the 1980s (8).
To our knowledge, no published literature systematically describes the epidemiology of human anthrax in China. This study was conducted to observe temporal trends, seasonality, and geographic distribution of human anthrax in China during the past 60 years and demographic characteristics during 2005−2014 to identify the current epidemiologic situation and provide information for control and prevention of this disease.

The national surveillance program of human anthrax is part of the Chinese Notifiable Disease Reporting System, which was started in the 1950s. During the 1950s–2003, aggregated data for each province (a province in China is similar to a state in the United States) was reported monthly by mail to the Chinese Center for Disease Control and Prevention (China CDC). In 2004, a real-time online nationwide reporting system was implemented. Since then, all human anthrax cases were required to be reported online <2 hours of diagnosis for inhalational anthrax and <24 hours of diagnosis for cutaneous and gastrointestinal anthrax.

Collection and Examination of Specimens

For every suspected anthrax case-patient, appropriate clinical specimens were required to be collected before treatment, including blood for all patients, vesicular fluid for patients with cutaneous anthrax, stools for patients with intestinal anthrax, and sputum or respiratory secretions for patients with inhalational anthrax. Every local CDC (county or prefecture) was required to examine stained smears of clinical specimens by microscopy. The presence of squared-ended, gram-positive, rod-shaped bacteria in chains was considered to be B. anthracis, and the corresponding specimens were required to be delivered to the provincial CDC for further bacterial isolation, which was conducted in Biosafety Level 2 laboratories.
In accordance with national surveillance protocol for anthrax (9), bacterial isolation was conducted on nutrient agar plates. Specimen were sprayed on plates after preprocessing, which included dilution or sedimentation and centrifugation, and heat-shocking. After incubation for 8–24 hours at 37°C, plates were checked for medium sized bacterial colonies that were hoary and opaque and had a ground-glass–like surface. Phage and penicillin were used to test for sensitivity typical for B. anthracis. Because reliable commercial kits for antibody testing are not available, ELISA was rarely used to test for specific antibody against B. anthracis. Recently, PCR was also used to provide laboratory evidence of B. anthracis infection. However, because there is no unified standard procedure for PCR of B. anthracis, PCR was also rarely used in laboratory analysis.

Human anthrax surveillance data included data for 1955–2014 of probable and confirmed cases for all 31 provinces in China. Aggregated data for cases and associated deaths by province and month were available for 1955–2003. During 2004–2014, each human anthrax case was reported online through a standardized form that included basic demographic information (sex, date of birth, address); occupation; diagnosis classification (probable or confirmed); clinical form (cutaneous, inhalational, or gastrointestinal); outcome (survival or death); date of illness onset; and date of death (if applicable). National population data for China during 1955–2014 were obtained from the National Bureau of Statistics of China (10).

This Chinese National Health and Family Planning Commission (Beijing, China) determined that collection of data for human anthrax cases was part of a continuing public health surveillance. Thus, this study was exempt from institutional review board assessment.

Figure 2. Monthly distribution of probable and confirmed human anthrax cases, China, 1955–2014.
The case-fatality rate showed an overall downward trend before the 1980s and then increased to a high of 13.0% in 1989, which was followed by a generally fluctuating decrease until 2014, when only 3 deaths were reported (Figure 1). Human anthrax cases occurred across the whole year, typically increasing in May, peaking in August (56% of cases occurred during July–September), and decreasing toward November. This pattern was consistent during 1955–2014 (Figure 2). 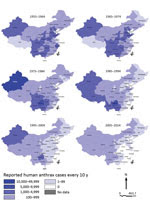 Figure 3. Provincial distribution of probable and confirmed human anthrax cases, China, 1955–2014.
All 31 provinces had >1 probable or confirmed case of human anthrax during 1955–2014. The distribution of cases showed an overall decrease of cases from western to eastern China. From the end of 1970s onward, some large cities, such as Shanghai (1979), Beijing (1984), and Tianjin (1985), and some provinces in eastern China, such as Fujian (1981), Zhejiang (1990), Jiangxi (1996), and Guangdong (1998), gradually stopped reporting human anthrax. In addition, cases were rarely reported in southeastern China (Figure 3).

During 2005–2014, a total of 86.7% of human anthrax cases were found in farmers and herdsmen. Rural cases accounted for 92.4% of all cases (Table). The overall male:female case ratio was 2.8:1, and there was no obvious changing trend during this period. The proportion of urban cases fluctuated around 7%, except for 15% in 2011. In rural areas, younger persons, usually men < 34 years of age, were more commonly affected. In urban areas, persons >40 years of age were more commonly affected. For affected persons < 1–14 and >65 y of age, cases were more common in female patients than in male patients (Technical Appendix[PDF - 604 KB - 6 pages] Figure 3).

We thank the hospitals, local health departments, and China CDC for assistance in coordinating data collection and the National Health and Family Planning Commission for supporting this study.
This study was supported by a grant from the National Science Fund for Distinguished Young Scholars (81525023).