Herbs at a Glance | NCCIH 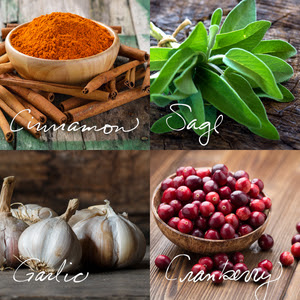 With Thanksgiving quickly approaching, we wanted to share some fast facts about five ingredients that might be in your holiday meal: cinnamon, sage, garlic, cranberry, and pomegranate.

Cinnamon
Cinnamon comes from the bark of trees that are native to China, India, and Southeast Asia. It has a long history of use as a traditional medicine. Some people use it as a dietary supplement for diabetes, gastrointestinal problems, loss of appetite, and other conditions. However, research doesn’t support using cinnamon for any health problem. It shouldn’t be used in place of conventional medical care or to delay seeking care, especially if you have diabetes. But you can enjoy its delicious flavor in your Thanksgiving pies.

Sage
Sage has been used for centuries as a spice. It’s also been used as a folk remedy for various conditions including mouth and throat inflammation, indigestion, and excessive sweating, as well as to improve mood and memory. Unfortunately, there hasn’t been enough high-quality research to conclude whether sage is helpful for any health condition. Sage is safe when used as a spice or seasoning in foods, and it tastes great in your Thanksgiving stuffing, but if it’s taken in large amounts, it can have serious side effects.

Garlic
Some people use garlic to flavor their Thanksgiving turkey or their favorite side dishes. Studies of large groups of people show that those who frequently eat garlic and related bulb-shaped plants, such as onions, chives, leeks, and scallions, have lower rates of several types of cancer. However, garlic dietary supplements haven’t been shown to reduce cancer risk. There’s weak evidence that garlic may be helpful for high blood pressure and conflicting evidence about whether it lowers cholesterol. Side effects of garlic include breath and body odor, heartburn, and upset stomach.

Cranberry
Thanksgiving wouldn’t be the same without cranberry sauce, made from berries that grow on an evergreen shrub found throughout North America. Cranberry is also used as a dietary supplement to try to prevent urinary tract infections (UTIs). However, the evidence on whether it can actually prevent UTIs is mixed. Cranberry hasn’t been shown to be effective for treating existing UTIs, so if you think you might have a UTI, be sure to see your health care provider—don’t use cranberry products in place of proven treatment.

Pomegranate
Pomegranate is a fruit with a leathery skin and many little pockets of edible seeds and juice inside. Since ancient times, it’s been a symbol of fertility. You may have seen claims that pomegranate can help fight serious diseases, but there isn’t a lot of strong scientific evidence about how it affects people’s health. Research on pomegranate is in its early stages, so it’s too soon to know whether any health claims for it are justified. But you can still celebrate National Pomegranate Month throughout the month by treating yourself to a pomegranate or its juice.

View all herbs and natural products.