Little is known about potentially modifiable factors in Ebola virus disease in children. We undertook a retrospective cohort study of children <13 years old admitted to 11 Ebola holding units in the Western Area, Sierra Leone, during 2014–2015 to identify factors affecting outcome. Primary outcome was death or discharge after transfer to Ebola treatment centers. All 309 Ebola virus–positive children 2 days–12 years old were included; outcomes were available for 282 (91%). Case-fatality was 57%, and 55% of deaths occurred in Ebola holding units. Blood test results showed hypoglycemia and hepatic/renal dysfunction. Death occurred swiftly (median 3 days after admission) and was associated with younger age and diarrhea. Despite triangulation of information from multiple sources, data availability was limited, and we identified no modifiable factors substantially affecting death. In future Ebola virus disease epidemics, robust, rapid data collection is vital to determine effectiveness of interventions for children.
The Ebola virus disease (EVD) outbreak in West Africa during 2014–2016 comprised ≈28,600 cases and claimed ≈11,300 lives (1). The case-fatality rate (CFR) was high for Ebola virus (EBOV)–infected children <5 years of age (2–4). Outbreak conditions with overstretched health systems and paucity of data has meant there is little understanding of how modifiable clinical management, operational-, and response-specific factors might have affected outcomes of children with EVD (3,5).
During the outbreak, several different health service models for managing suspected EVD cases evolved. In the highly populated Western Area of Sierra Leone, including Freetown, on-site Ebola holding units (EHUs) were set up at health facilities. Their goal was to enable provision of normal healthcare to continue by screening patients before entry (6). Patients fulfilling screening criteria were admitted to the on-site EHUs for EVD testing. Persons testing positive for EBOV were transferred to Ebola treatment centers (ETCs). At the height of the outbreak, laboratory, ambulance, and bed capacities were overwhelmed, leading to substantial delays throughout the pathway, limited provision of clinical care, and long transfer distances (7,8). As the response scaled up, delays shortened and transfer distances decreased as more ETCs opened locally (7,8). These changing health systems factors possibly affected death and are amenable to modification in future outbreaks.
Patient data were collected on paper forms at EHUs and ETCs. Basic demographic and initial symptom information was telephoned to regional control centers for entry into electronic databases and transfer to international nongovernment organizations for epidemiologic surveillance (3,5,9,10). However, data on clinical management and key factors, such as caregiver accompaniment, were not included. Furthermore, communication between EHUs and ETCs was limited, meaning EHUs had no information about patient outcome after transfer, and data from ETCs were subject to substantial survivorship bias (11–13). Attempts to link clinical management data between sites were limited.
We describe the clinical features, management, and outcomes of children with EVD from initial presentation to final outcome. We also explore risk factors for death, in particular factors amenable to modification. 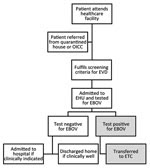 Figure 1. Patient care pathway of EHUs, Western Area (including Freetown), Sierra Leone, August 2014–March 2015. The OICC was set up to care for children with substantial Ebola virus exposure (usually a first-degree...
All children <13 years of age admitted to 11 EHUs in the Western Area from August 14, 2014, through March 31, 2015, were eligible for inclusion, anticipating that the disease phenotype in adolescents might be similar to that in adults and that some factors (e.g., caregiver accompaniment) were more relevant for younger children (3,14). Patients were screened for EVD symptoms or contact with EBOV on entry to healthcare facilities. Patients whose signs and symptoms fulfilled the World Health Organization definition for a suspected case were admitted to on-site EHUs to have blood taken for EBOV PCR testing (Technical Appendix[PDF - 683 KB - 10 pages] Figure) (15). Basic demographic data were reported to the Western Area Emergency Response Command Centre (WAERC). Samples were transported to specialist laboratories, which were usually off-site. Patients testing negative for EVD were discharged home or admitted to a routine (non-Ebola) hospital bed (Figure 1) (8). Patients testing positive were transferred to an ETC coordinated by the WAERC. Occasionally, if ETCs were full, a patient might stay at an EHU for the duration of illness and be discharged home directly.
Medical care varied among EHUs according to staffing capabilities and facilities available. The Sierra Leone Ministry of Health recommended that all patients admitted to an EHU receive antimalarial drugs and broad-spectrum antimicrobial therapy (15,16). Until late December 2014, most EHUs abstained from taking blood for tests other than EBOV PCR (WAERC, November 2014, unpub. data). Treatment was primarily supportive; some units operated a no-needle policy, providing only oral rehydration salt (ORS) solution and oral medications. Most units did not allow asymptomatic caregivers to enter an EHU high-risk area (i.e., Red Zone) with their children, because of the potential risk for nosocomial EBOV infection, so many children were admitted alone.

Possible outcomes were death (recorded at EHU or ETC) or survival (recorded as discharge from ETC or EHU). We considered variables encoding potential risk factors for outcome, including demographics (age, sex); duration from symptom onset to EHU arrival; symptoms at presentation; receipt of antimicrobial drugs, antimalarial drugs, or intravenous fluids at EHU; specific EHU attended; period in the epidemic (before or on/after January 9, 2015, when bed capacity first outstripped demand in the Western Area [8]); and whether the child was admitted alone, unaccompanied by a caregiver (online Technical Appendix).
We restricted a separate analysis to children transferred to ETCs. Variables were days from EHU admission to ETC transfer, transfer distance, ETC attended, and receipt of medications or intravenous fluids at the ETC. If health information was available for survivors after discharge, it was collected but was not a primary focus of this study.

At study conception in December 2014, we estimated 300 children would have sought care in Western Area EHUs. We aimed to obtain data on all these children (see calculations in online Technical Appendix).

Data were available on symptoms at presentation for ≈70% of children (Table 1). Fever was the most prevalent symptom (99%), followed by fatigue/weakness (80%), anorexia (79%), vomiting (59%), and diarrhea (44%); unexplained bleeding was rare (1%). Median reported duration of symptoms before presentation was 3 days (IQR 2–4 days). Of 193 children for whom exposure data were available, 151 (78%) had documented prior contact with a person with EVD, and 42 (22%) had documentation of no prior exposure to EVD.
Additional clinical information was available for a subset of 88 patients for the duration of EHU/ETC admission. In addition to 3 children with spontaneous bleeding at presentation, 7 (8%) had bleeding after admission. In order of frequency, manifestations were bleeding gums, epistaxis, hematemesis, melena, and vaginal bleeding. Only 1 of these 10 children survived to discharge. Seizures were recorded during admission in 6 (7%) children: 3 died, 2 were discharged in a comatose state, and 1 recovered with no reported sequelae.

Additional blood test results were available for 36 children from 3 health facilities (Table 2). These children were of similar age (median 6 years, IQR 3–7 years) to children in the overall cohort, but the CFR was lower (11/36 [31%; 95% CI 16%–48%]). Children who died were younger than children who survived (data not shown).
Tests were taken a median of 3 days (range 0–18 days) after admission at an EHU. Leukocyte count (predominantly granulocytes) and C-reactive protein were elevated, and there was considerable renal and liver function derangement, particularly among children who died. Hyponatremia occurred among children who survived and who died, but potassium levels tended to be within normal limits. Hypoglycemia (blood glucose <4.0 mmol/L [reference 4–6.9 mmol/L) was common among children who died (55% [95% CI 23%–83%]) and who survived (30% [95% CI 13%–53%]).
Cycle threshold (Ct) represented the point at which a quantitative PCR was interpreted as positive: the lower the Ct, the higher the initial viral load. Results were available from 90 children (42 who survived; 40 who died; 8 unknown; median age [IQR] 8.5 years [4–11 years], 5.0 years [3–10 years], and 6.0 years [2.9–10.5 years], respectively). The range of Ct was similar for children who died and who survived (14.3–35.8 vs. 17.0–38.2) (Table 2).

Median duration of admission at EHU before transfer or death was 2 days (IQR 1–3 days). Outcomes were available for 193 children who survived to transfer to an ETC. Twenty-five (13%) were transferred directly onto an on-site treatment ward, but most (168 [87%]) traveled 5–380 km (median 25 km [IQR 19.5–45.0 km]). For 201 children for whom information was available about caregiver accompaniment (written documentation in 119 [59%], information from staff interviews alone in 84 [41%]), 74 (37%) were documented as unaccompanied admissions.
Treatment was primarily supportive but ranged from aggressive intravenous or intraosseous fluid resuscitation with laboratory monitoring (more common in ETCs) to ORS and oral medications. Medications received at either EHUs or ETCs were recorded for 178 (58%) children: 99% received antimicrobial drugs and ORS, 85% antimalarial drugs, and 19% intravenous fluids.

In univariable analysis, younger age (odds ratio [OR] per year of life 0.91 [95% CI 0.85–0.97]) and diarrhea at presentation (OR 1.94 [95% CI 1.11–3.39]) were significantly associated with death. CFR was highest for infants (70%) (Figure 3, panel C).
In multivariable analysis, age was the strongest predictor of death (adjusted OR 0.92 [95% CI 0.86–0.98] per 1-year increment in age) (Table 1; Figure 3, panel C). Diarrhea at presentation was associated with death (OR 1.91 [95% CI 1.08–3.39]). None of the following were associated with death: time from symptom onset to EHU admission, receipt of specific medications or intravenous fluids, attendance at any particular EHU, or being accompanied by a caregiver (Table 1; Technical Appendix[PDF - 683 KB - 10 pages] Table 2). We found minimal difference between estimates obtained by analyzing only complete records compared with accounting for missing data using multiple imputation (Technical Appendix[PDF - 683 KB - 10 pages] Tables 3, 4).
For 193 children transferred to ETCs for whom outcomes were known (Technical Appendix[PDF - 683 KB - 10 pages] Tables 5, 6), neither longer duration of EHU stay before transfer nor longer transfer distances appeared detrimental. Outcomes between ETCs varied considerably, but CIs were wide. Receipt of medications or intravenous fluids at the ETC also were not associated with survival.

Of 122 surviving children, data from survivor clinics or telephone interviews were available for 42 (34%). Twenty-five (60%) reported no problems; 6 (14%) were referred for ophthalmologic review with possible uveitis, 1 with monocular blindness; 3 (7%) had hearing problems; 2 (5%) had alopecia; 2 (5%) had joint pains; and 1 (2%) depressed affect. Of 2 children discharged without fully recovering consciousness, 1 was recovering and being cared for at home; the second had made little improvement in hospital.