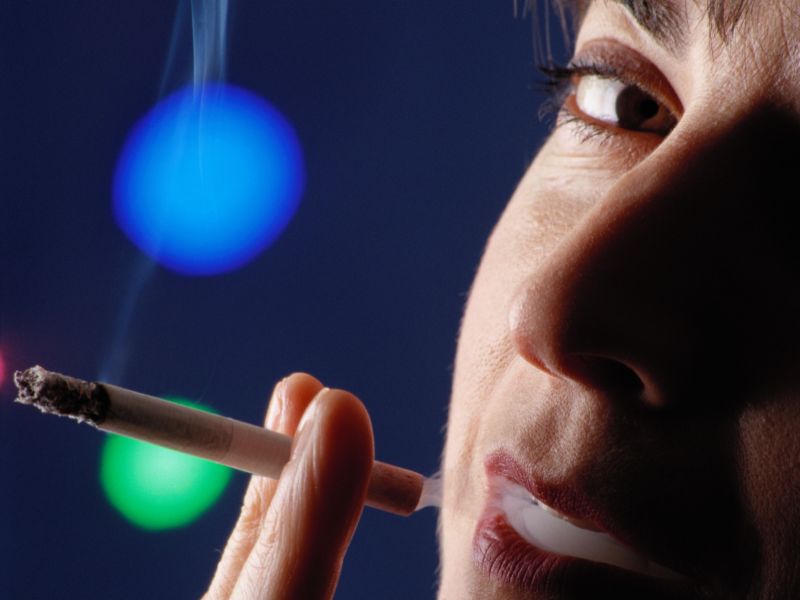 THURSDAY, July 21, 2016 (HealthDay News) -- Strokes characterized by bleeding inside the lining of the brain are more common among smokers, especially women, researchers report.
These serious strokes -- called subarachnoid hemorrhages -- are eight times more common among women who smoke more than a pack a day compared to nonsmokers, Finnish researchers found. They're three times more common among men who smoke the same amount.
Even light smoking tripled a woman's risk for this type of stroke, the study found.
"There is no safe level of smoking, and naturally, the best option is never to start," said lead researcher Dr. Joni Lindbohm of the University of Helsinki.
"The message for policymakers is that by implementing effective strategies against smoking, they can considerably reduce the burden of subarachnoid hemorrhage," said Lindbohm, who specializes in neurosurgery and public health.
Subarachnoid hemorrhages account for about 3 percent of all strokes, said Dr. Ralph Sacco, chairman of neurology at the University of Miami Miller School of Medicine.
These strokes often affect younger people and "can be quite devastating in terms of disability and death, with fatality rates around one in five," said Sacco, who wasn't involved in the study.
This type of stroke usually results from a bleeding aneurysm in the brain. An aneurysm is a small weak spot in a blood vessel that can burst at any time.
For the study, Lindbohm and colleagues collected data on nearly 66,000 adults listed in Finnish national surveys since 1972. Participants were followed for an average of 21 years, until they had a first stroke, died, or until the end of 2011.
The researchers found that among light smokers -- one to 10 cigarettes a day -- women were three times more likely to have subarachnoid hemorrhage, and men were twice as likely to have one compared to nonsmokers.
Among those who smoked 11 to 20 cigarettes a day, women were four times more likely and men two times more likely to suffer this type of stroke, the investigators found.
But those who quit smoking significantly reduced their odds of having a subarachnoid hemorrhage. After six months without smoking, their risk fell to the level of nonsmokers, the researchers reported.
Although subarachnoid hemorrhage is more common among women than men, the reasons why are unclear, Lindbohm and Sacco said. Lindbohm believes the elevated risk in women largely comes down to the harms of smoking.
The link between smoking and these strokes didn't come as a surprise, Sacco noted. "The association between cigarette smoking and subarachnoid hemorrhage has been known for years," he said.
"Although risks do rise with age, it is an important cause of stroke in the young," he added.
As with other strokes, some factors likely increase the risk of developing an aneurysm that eventually ruptures and causes a subarachnoid hemorrhage, he explained.
"Cigarette smoking and high blood pressure are two important modifiable risk factors for subarachnoid hemorrhage," Sacco said. "This study adds more evidence to the call to the public to never smoke, and control their blood pressure to avoid this type of stroke."
Lindbohm said that heavy-smoking females with unruptured aneurysms in their brain are a high-risk population, and their aneurysms should be treated.
The report was published online July 21 in the journal Stroke.
SOURCES: Joni Lindbohm, M.D., physician, neurosurgery and public health, University of Helsinki, Finland; Ralph Sacco, M.D., chairman, neurology, University of Miami Miller School of Medicine; July 21, 2016, Stroke, online
HealthDay
Copyright (c) 2016 HealthDay. All rights reserved.
News stories are provided by HealthDay and do not reflect the views of MedlinePlus, the National Library of Medicine, the National Institutes of Health, the U.S. Department of Health and Human Services, or federal policy.