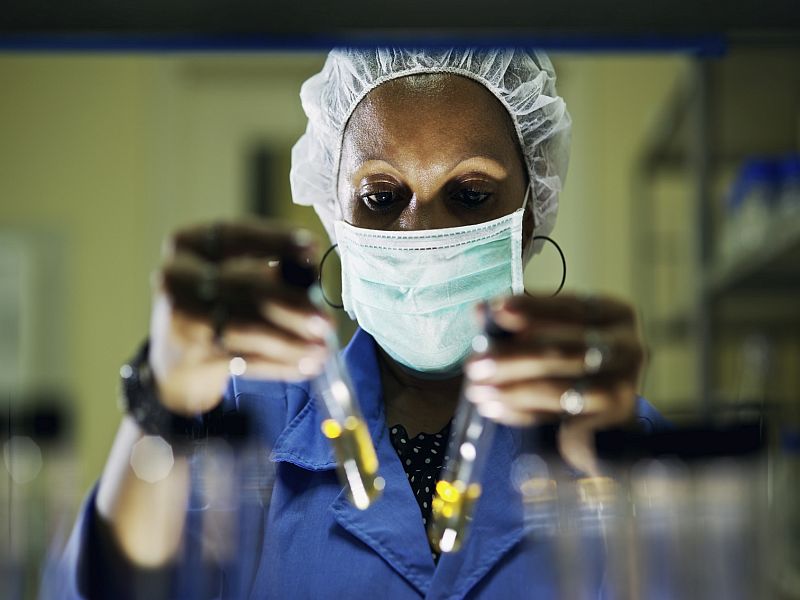 WEDNESDAY, June 29, 2016 (HealthDay News) -- An experimental drug called midostaurin may reverse organ damage in people with certain rare, fatal blood cancers, an early clinical trial finds.
Researchers found that the drug at least partly reversed organ damage in 60 percent of patients with advanced systemic mastocytosis -- an umbrella term for several rare cancers that affect blood cells called mast cells.
Normally, mast cells release histamines and other chemicals during inflammatory and allergic reactions. In aggressive cases of systemic mastocytosis, abnormal mast cells build up in the bone marrow, skin, gut, spleen, liver and lymph nodes.
As a result, people with the cancers constantly feel sick, said Dr. Robert Hromas, a blood cancer specialist at the University of Florida.
"They're debilitating," he said. "You feel miserable all the time."
No good treatment options exist for people with advanced mastocytosis. So the new findings are "a real advance," said Hromas, who wasn't involved in the study.
"This is a drug that works," he said. "And until now, we've really had nothing."
The study does not prove that midostaurin extends people's lives, said Hromas, who is also a spokesman for the American Society of Hematology.
But patients who responded to the drug did see most of their symptoms improve, and they reported a higher quality of life -- which is important, Hromas pointed out.
The findings, published in the June 30 issue of the New England Journal of Medicine, add to evidence of midostaurin's benefits.
The drug, a twice-daily pill, has already been shown to lengthen the lives of patients with a subtype of acute myeloid leukemia.
In February, the U.S. Food and Drug Administration granted midostaurin "breakthrough therapy" status, which will speed the agency's review of the drug.
As it stands, the only drug approved to treat advanced systemic mastocytosis is Gleevec (imatinib). But it doesn't work for most patients, said study leader Dr. Jason Gotlib, an associate professor of medicine-hematology at Stanford University School of Medicine, in Stanford, Calif.
That's because about 90 percent of patients have tumors with a mutated gene that makes them resistant to Gleevec, Gotlib explained.
That mutation occurs in a protein called KIT, which controls the growth of mast cells.
"It's the gas pedal driving these cancers," Hromas said. "And midostaurin targets it."
To test the drug, Gotlib and colleagues at 29 medical centers around the world recruited 116 patients with advanced systemic mastocytosis, including mast-cell leukemia. Novartis, which is developing midostaurin, partially funded the study.
All of the patients received midostaurin. Overall, 60 percent responded to the drug -- meaning that at least some of their organ damage receded, or completely resolved.
Of patients who had an enlarged spleen, for example, 77 percent showed a reduction in the organ's size. That's important, Gotlib said, because spleen enlargement causes pain, poor appetite and weight loss.
For the most part, patients who responded to the drug saw their symptoms improve. The exceptions were nausea and vomiting, which are the most common side effects of midostaurin, Gotlib said.
Because the study had no comparison group, it's not clear what kind of effect the drug might have on survival, Hromas said.
There were hints of a benefit, though. Eighteen percent of the patients had a particularly aggressive cancer called mast-cell leukemia. They typically survived for just over nine months, whereas the disease usually kills people within six months, Gotlib said.
Across the whole study group, patients typically lived for almost 2.5 years.
The findings are encouraging, Gotlib noted. "But," he stressed, "we need to do better."
He said future studies should try combining midostaurin with other treatments -- including bone marrow transplants, which have shown promise in recent research.
For now, patients with advanced systemic mastocytosis may be able to get midostaurin through the Novartis "compassionate use" program, Gotlib said.
"But we hope it will be approved soon," he added.
Hromas made another point: Midostaurin was nearly abandoned after early research in other cancer patients did not pan out.
"I think that's a lesson for oncology, in general," Hromas said. "We may have drugs 'on the shelf' that look like they don't work, only because we haven't found the right segment of patients yet."
SOURCES: Jason Gotlib, M.D., associate professor, medicine-hematology, Stanford University School of Medicine, Stanford, Calif.; Robert Hromas, M.D., professor, medicine, University of Florida College of Medicine, Gainesville; June 30, 2016, New England Journal of Medicine
HealthDay
Copyright (c) 2016 HealthDay. All rights reserved.
News stories are provided by HealthDay and do not reflect the views of MedlinePlus, the National Library of Medicine, the National Institutes of Health, the U.S. Department of Health and Human Services, or federal policy.
Publicado por salud equitativa en 13:50