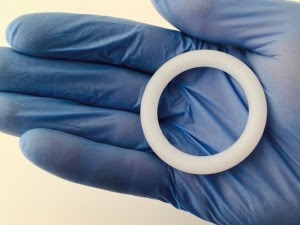 NIH Clinical Trial Will Clarify Relationship between Ring Adherence, HIV Infection Risk A new exploratory analysis of data from the ASPIRE study has found that using a drug-infused vaginal ring most or all of the time reduced the risk of HIV infection in women by at least 56 percent. [READ MORE]

The dapivirine vaginal ring. Credit: NIAID
A new exploratory analysis of data from theASPIRE study has found that using a drug-infused vaginal ring most or all of the time reduced the risk of HIV infection in women by at least 56 percent. This finding is being reported today at a press briefing at the 21st International AIDS Conference (AIDS 2016) in Durban, South Africa, and will be presented in more detail tomorrow in a lecture at the conference.
As reported earlier this year, the ring, which continuously releases the anti-HIV drug dapivirine, safely reduced the risk of HIV infection by 27 percent in the ASPIRE study population overall and by 61 percent among participants ages 25 years and older. Another clinical trial expected to launch this week will build on ASPIRE by gathering data on whether and how women use the dapivirine ring knowing it is safe and moderately effective. Called the HOPE (HIV Open-Label Extension) study, this follow-on trial also will further examine the relationship between adherence to the ring and protection from HIV infection, and will gather data on the extended safety of the monthly ring. ASPIRE, HOPE and the exploratory analysis all are funded primarily by the National Institute of Allergy and Infectious Diseases (NIAID), part of the National Institutes of Health (NIH).
“The findings from the ASPIRE study told us how much protection the dapivirine ring afforded the study population as a whole, which included women who used the ring often, sometimes, or not at all,” explained NIAID Director Anthony S. Fauci, M.D. “However, we know that HIV prevention tools work only if people use them. The findings of the exploratory analysis reported today give credence to the hypothesis that greater adherence to the dapivirine ring translates into a higher level of protection. The HOPE trial will provide additional data that either reinforce or refute this hypothesis.”
The exploratory analysis was led by Elizabeth R. Brown, Sc.D., the principal investigator of the Statistical and Data Management Center of the NIH-funded Microbicide Trials Network (MTN). The MTN conducted ASPIRE and will conduct HOPE, also known as MTN-025. Dr. Brown is a member at the Fred Hutchinson Cancer Research Center and a research professor in biostatistics at the University of Washington.
“We did these new analyses to better understand the potential degree of protection the dapivirine ring could provide,” said Dr. Brown. “These results are encouraging, finding that protection could be significant with consistent use.”
The Eunice Kennedy Shriver National Institute of Child Health and Human Development and the National Institute of Mental Health, both part of NIH, co-fund the MTN with NIAID.
One year into the ASPIRE study, investigators began to measure the amount of dapivirine left in the rings women returned to study staff. After the trial ended, researchers used these measurements along with data on which women became HIV-infected during the study to examine the relationship between adherence to the ring and the risk of HIV infection. Nearly 2,400 of the more than 2,600 women who participated in the ASPIRE study were included in the analysis.Adherence was associated with a reduction in risk of HIV infection of at least 56 percent, and high adherence was associated with a risk reduction of potentially 75 percent or more. Low adherence was not associated with statistically significant protection from HIV infection.
The ASPIRE study was led by Jared Baeten, M.D., Ph.D., a professor of global health, medicine and epidemiology at the University of Washington in Seattle, and Thesla Palanee-Phillips, Ph.D., M.Sc., director of network trials and research center programs at the Wits Reproductive Health and HIV Institute in Johannesburg, South Africa. Drs. Baeten and Palanee-Phillips also will lead the HOPE study together with Nyaradzo M. Mgodi, M.B.Ch.B., M.Med. Dr. Mgodi is a clinical pathologist and clinical research site leader at the University of Zimbabwe–University of California San Francisco Collaborative Research Program in Harare, Zimbabwe.
“The HOPE study will give us the opportunity to learn why women do or do not like to use the dapivirine ring—information that might help us plan the optimal approaches for its delivery outside of research settings, improve upon the product and clarify how different HIV prevention options fit into women’s lives,” said Dr. Baeten.
Unlike ASPIRE, in which participants did not know until the end of the study whether they had received the dapivirine ring or a placebo ring, the HOPE study team will offer the dapivirine ring to all who enroll. The trial will be open to all of the eligible 2,614 women who participated in the ASPIRE study and are not HIV-infected. The HOPE study will take place at former ASPIRE study sites in Malawi, South Africa, Uganda and Zimbabwe.
Participants in the Phase 3b trial will be offered the dapivirine ring to place in the vagina each month for up to 12 consecutive months. During the first three months, the women will attend monthly study visits where they may obtain a new ring. Thereafter, they will attend quarterly visits where they may obtain three rings at a time, a schedule that more closely resembles how the ring would be distributed in a real-world setting. Adherence to the ring will be determined by measuring residual levels of dapivirine in returned rings and blood levels of dapivirine.
Participants may remain in the HOPE study regardless of whether they accept or use new rings. By allowing women to opt out of ring use but remain in the study, researchers will gain insight into whether or not participants like using the ring and why, as well as what factors influence use and nonuse.The HOPE study will be sponsored by the International Partnership for Microbicides (IPM), which developed the dapivirine vaginal ring and is providing it for the trial. IPM led a sister study to ASPIRE and recently began its own follow-on trial called DREAM.
For more information about the exploratory analysis and the HOPE study, please see the MTN press release

. More information about DREAM and the dapivirine ring can be found on theIPM website