Genes Might Help Shield Some Black Men From Obesity: MedlinePlus

Genes Might Help Shield Some Black Men From Obesity: MedlinePlus

Genes Might Help Shield Some Black Men From Obesity 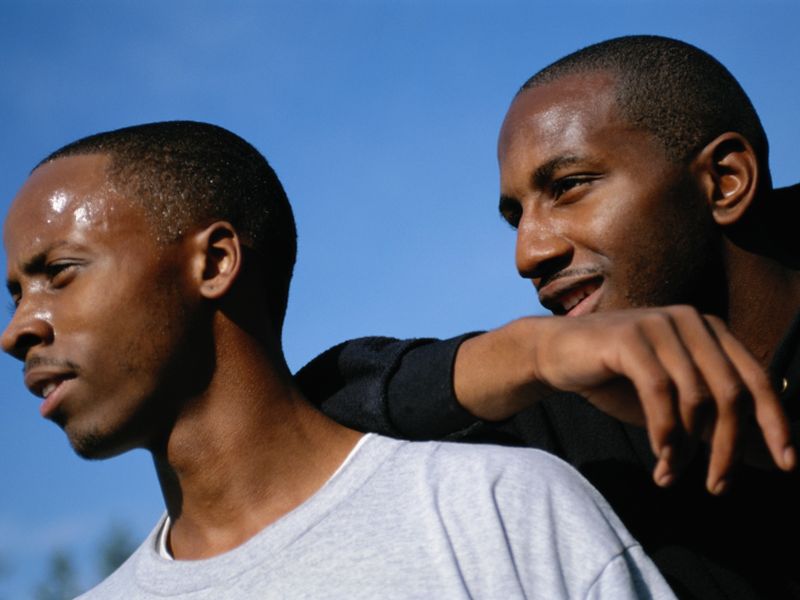 WEDNESDAY, June 1, 2016 (HealthDay News) -- Though the obesity epidemic affects people of all backgrounds, experts have long noted that black women face a notably higher risk of being overweight or obese than black men.
Now, a new study has identified genetic factors in black men with a strong West African ancestry that are associated with a lower risk of belly fat. But this apparent benefit doesn't extend to black women, regardless of their lineage.
"This finding is not entirely novel," said study lead author Yann Klimentidis, an assistant professor with the department of epidemiology and biostatistics at the University of Arizona.
"There is some previously existing evidence that individuals of West African descent tend to have lower levels of visceral, or belly, fat," he said.
"However, our finding is novel in showing that this protective effect appears to be limited to men," Klimentidis added, "and thus potentially explaining why there is such a large gender disparity in obesity rates among African-Americans."
More than eight in 10 black American women are either overweight or obese, a U.S. survey found. About three-quarters of Hispanic women are overweight or obese. And, 65 percent of white women face similar weight concerns, the survey showed.
Slightly less than 70 percent of black men in the United States are either overweight or obese, the survey noted. In white men, that figure is 73 percent. And about 78 percent of Hispanic men are overweight or obese, the survey said.
Being overweight or obese is a known risk factor for developing type 2 diabetes, the American Diabetes Association says. Black American women are more likely to have type 2 diabetes than white American women. But type 2 diabetes is more prevalent among white American men than black American men, the study authors said.
The researchers wanted to learn if genetics might explain these differences. So, the study team looked at genetic data collected by the U.S. National Heart, Lung, and Blood Institute. Samples were collected from nearly 4,500 black men and women. The study volunteers were between 45 and 85 years old.
The researchers looked for evidence of West African or European ancestry.
The study also included hip and waist measurements, a standard way to assess excess belly fat. The researchers compared genetic factors to these measurements.
Although the investigators found that black men with a "high degree" of West African ancestry were less likely to carry excess belly fat, it's not clear which specific genes might offer black men some obesity protection. It's also not clear how such a genetic background might interact with lifestyle habits, such as diet and exercise, to lessen obesity risk. Or, when those genetic factors are missing, how lifestyle might boost obesity risk.
"There are many different risk factors for obesity," stressed Klimentidis, "so it's difficult to say what percentage of men benefit. But in general, our findings suggest that men with greater West African ancestry are those most likely to be protected from obesity or belly fat.
"We still need to identify the specific genes that protect African-American men," Klimentidis added, "and also better understand why women do not benefit in the same way."
The study was published June 1 in Frontiers in Genetics.
Ruth Loos, an expert on the genetics of obesity, called the new findings "intriguing," but unsurprising.
"People's genetic ancestry -- such as African, European, Asian -- determines, in part, what they look like. It also contributes to some populations' increased risk of developing certain diseases, such as diabetes, hypertension, and cardiovascular diseases. Therefore, it's not unlikely that people's ancestry will also make them more susceptible to weight gain," said Loos, who wasn't part of the study. She's the director of the Genetics of Obesity and Related Metabolic Traits Program at the Icahn School of Medicine at Mount Sinai, in New York City.
Still, Loos said that future research will need to reconfirm the findings. New research should also attempt to figure out why certain genes end up keeping weight down among black men but not black women, she added.
SOURCES: Yann C. Klimentidis, Ph.D., assistant professor, department of epidemiology and biostatistics, Mel & Enid Zuckerman College of Public Health, University of Arizona, Tucson; Ruth Loos, Ph.D., director, Genetics of Obesity and Related Metabolic Traits Program, Charles R. Bronfman Institute of Personalized Medicine, Icahn School of Medicine at Mount Sinai, New York City; June 1, 2016, Frontiers in Genetics
HealthDay
Copyright (c) 2016 HealthDay. All rights reserved.
News stories are provided by HealthDay and do not reflect the views of MedlinePlus, the National Library of Medicine, the National Institutes of Health, the U.S. Department of Health and Human Services, or federal policy.