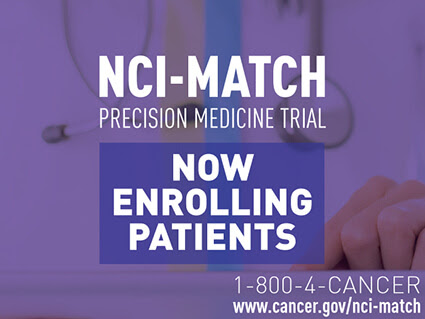 NCI-Molecular Analysis for Therapy Choice (NCI-MATCH) is a clinical trial that analyzes patients’ tumors to determine whether they contain genetic abnormalities for which a targeted drug exists (that is, “actionable mutations”) and assigns treatment based on the abnormality. NCI-MATCH seeks to determine whether treating cancers according to their molecular abnormalities will show evidence of effectiveness.
NCI-MATCH can add new treatments or drop treatments over time. Each treatment will be used in a unique arm, or substudy, of the trial. The trial opened for enrollment in August 2015 with 10 treatment arms, paused for an interim analysis in November 2015, and reopened in May 2016 with a total of 24 treatment arms. Each arm expects to enroll a maximum of 35 patients.
Adults 18 years of age and older with advanced solid tumors and lymphomas that are no longer responding (or never responded) to standard therapy and have begun to grow may be candidates to take part in the NCI-MATCH trial.
The trial will examine tumor biopsy specimensfrom as many as 5,000 patients. The specimens undergo DNA sequencing to identify those that have genetic abnormalities that may respond to the targeted drugs selected for the trial. The drugs included in the trial have either been approved by the U.S. Food and Drug Administration (FDA) for another cancer indication or are still being tested in other clinical trials but have shown some effectiveness against tumors with a particular genetic alteration(s). Treatment arms may continue to be added to the trial over time as drug companies and others develop promising targeted therapies.

NCI-MATCH, which is coordinated by the ECOG-ACRIN Cancer Research GroupExit Disclaimer, has national reach and is offered at many clinical sites across the United States that participate in NCI's National Clinical Trials Network. Therefore, patients may not need to travel far from home to participate in the trial. The trial also employs the expertise of the NCI and of specialized investigators and scientists within NCI-Designated Cancer Centers and networks who are at the cutting edge of precision medicine in oncology, as well as clinical oncologists and community practices that are experienced in clinical trials, such as those that are part of the NCI Community Oncology Research Program.
NCI-MATCH utilizes advanced DNA sequencing which has been extensively validated across four certified clinical laboratories for high consistency of results. Because of the volume of specimens that needed to be processed in 2015, and an even higher volume expected going forward, the laboratories greatly expanded their sequencing capacity in 2016. The investigators in the four chosen laboratories are among those with the most expertise in these types of assays. The trial is also using standard procedures to collect specimens and prepare them for analysis.
The trial has included many more drugs for testing than most other clinical trials and is including even more drugs as additional arms are added. Many pharmaceutical companies are collaborating in NCI-MATCH and have also contributed their expertise.
Because it is difficult to perform molecularly targeted clinical trials except in the most prevalent types of cancer, NCI-MATCH is designed to be able to detect responses to the inhibition of driver mutations in more than one tumor type. Such findings can then be followed up with additional clinical trials to learn more about the effect of the drug on patients whose tumors have the targeted mutation.

Patients and the Trial Process

The NCI-MATCH trial has two enrollment steps. Each patient initially enrolls for screening. In this step, a biopsy procedure is used to remove tumor samples that then undergo DNA sequencing to detect genetic abnormalities that may be driving tumor growth. If a molecular abnormality is detected that is targeted by one of the drugs being studied in the trial, patients are further evaluated to determine if they meet the specific eligibility requirements of that arm and can be accepted into NCI-MATCH. Once enrolled, patients are treated with the targeted drug for as long as their tumor shrinks or remains stable. Overall, the trial investigators plan to screen about 5,000 patients during the full course of the NCI-MATCH trial.

A patient with an advanced solid tumor or lymphoma can enroll for screening. The most common cancers are those of the breast, colon, lung and prostate. A goal for NCI-MATCH is for at least 25 percent of the total patients enrolled in the trial to have rare cancers. Rare cancers include cancers at sites in the body where cancer rarely occurs, such as the eye, ureter, and pituitary gland, as well as cancers that are classified as rare because the primary location of the tumor could not be determined at the time of diagnosis.

How Patients Are Being Screened for Gene Mutations

Biopsy specimens removed from patients' tumors are sent to one of four genetic testinglaboratories, where they are analyzed for more than 4,000 different variants across 143 genes. To efficiently investigate the effectiveness of molecularly targeted therapies for patients with the corresponding driver mutations, a broad-based genomic pre-screening effort such as this is necessary to find and assign patients whose tumors harbor these mutations, regardless of tumor origin.

Determining If a Treatment Has Promise

The primary endpoint for NCI-MATCH is the objective response rate, or ORR, defined as the percentage of patients whose tumors have a complete or partial response to treatment (that is, the tumors shrink by a certain amount). Treatments will be considered promising for incorporating into future studies if at least 16 percent of the patients in an arm are observed to have tumor shrinkage. This threshold was chosen to minimize the chance that a treatment that is actually ineffective will appear promising, while also maximizing the chance that a treatment that is actually effective will appear promising.
A secondary endpoint for the trial is six-month progression-free survival (PFS), that is, the percentage of patients whose disease does not worsen for at least six months.
In addition to assessing ORR and PFS, researchers will also determine time to progression(TTP) of the cancer and evaluate the side effects of the treatments.

In the design of the trial, NCI-MATCH’s protocol incorporated a pause for review after 500 patients were enrolled for mutation screening. The trial reached the 500 patient enrollment mark in late October 2015, which was much quicker than expected. Indeed, more than five times the expected number of patients enrolled in the first 3 months after the trial opened. Patient enrollment was paused in November 2015 so that the planned review could take place. The review allowed the investigators to examine how the trial was performing and to assess how to improve tumor and drug match rates, among other factors.
Data collected during the pause period was analyzed according to many trial parameters, and interim analysis findings were presented in April 2016 at the American Association for Cancer Research (AACR) annual conference. Some of those findings included:

NCI-MATCH re-opened for patient enrollment to the screening phase in May 2016. Among the changes to the trial at that time were:

Actionable Mutations and Matching Drugs (as of May 2016)

The genetic test will assess the following molecular abnormalities in 2016 as defined by the trial arm number. All NCI-MATCH treatments must have shown clinical activity in at least one molecularly characterized tumor:

Re-testing for Eligibility in New Arms of the Trial

Patients can be considered for entering a second arm of NCI-MATCH if the first treatment they received in NCI-MATCH was not successful. If genetic testing showed that the patient has a second abnormality that is targeted by a drug being studied in the trial, and if there is an open slot in the substudy that is testing that drug, the patient may be eligible for the second substudy. There may be additional tests that the patient would need to have before being registered into the new arm to receive treatment.
If a patient does not have a match in the first biopsy, and a treatment match becomes available later that might correspond to the patient’s mutations, the patient’s doctor will be notified. If the patient had another treatment since the initial biopsy, a new biopsy sample may be required before beginning a treatment arm.

The trial covers the cost of the biopsy and molecular tests, and patients will receive the drugs without charge if they are eligible to enroll for an NCI-MATCH treatment. Neither the patients nor a health plan/insurance company will have to pay for any study-related biopsies or the assigned study drug(s) that were matched to a patient’s cancer.
Unless patients are informed that certain tests are being done at no charge, they or their health plan/insurance company will need to cover all of the other costs, including the cost of tests, procedures, or medicines to manage any side effects of the biopsy and treatment. Enrollees will not be paid for participation in this study.

NCI-MATCH is supported by NCI and is coordinated by the ECOG-ACRIN Cancer Research GroupExit Disclaimer. Personnel from NCI, ECOG-ACRIN, and the other adult trial groups in the NCI-supported National Clinical Trials Network (NCTN)—the Alliance for Clinical Trials in OncologyExit Disclaimer, SWOGExit Disclaimer, and the NRG Oncology GroupExit Disclaimer—have collaborated in the development of NCI-MATCH. The NCTN includes researchers, physicians, and health care professionals at public and private institutions across the United States. They conduct clinical trials on all types of adult cancers.
In addition to the institutions belonging to the NCTN, NCI-MATCH will be open to all institutions and sites that participate in the NCI Community Oncology Research Program(NCORP).
For clinical trial tracking purposes, the NCI-MATCH trial is also referred to as EAY131 and asNCT02465060.

The Precision Medicine Initiative® was funded through a $215 million request in the President’s 2016 Budget directed at the NIH, the FDA, and the Office of the National Coordinator for Health Information Technology. The PMI revolves around precision medicine, an approach to disease prevention and treatment that takes into account individual differences in people’s genes, environments, and lifestyles. Precision medicine gives clinicians tools to better understand the complex mechanisms underlying a patient’s health, disease, or condition, and to better predict which treatments will be most effective.
In the PMI budget, $70 million will go to NCI to scale up efforts to identify genomic drivers in cancer and apply that knowledge in the development of more effective approaches to cancer treatment. NCI-MATCH supports the overall initiative because it is an example of how NCI is accelerating the design and testing of tailored treatments for cancer by expanding genetically based clinical cancer trials, exploring fundamental aspects of cancer biology, and establishing a national “cancer knowledge network” that will generate and share new knowledge to fuel scientific discovery and guide treatment decisions.

A trial that will be known as NCI Pediatric MATCH will use a similar approach as the adult NCI-MATCH for pediatric patients but will be a completely separate trial. The trial will be led by the Children’s Oncology Group (COG), another NCTN group. It is still in development and is expected to launch late in 2016.

To learn more about this trial, patients should start by speaking with their doctors or healthcare team. More details about the trial are available in the protocol summary. As the trial progresses, the list of clinical sites will continue to grow as new sites are added.
Patients, families, and clinicians can also call NCI’s Cancer Information Service at 1-800-4-CANCER (1-800-422-6237) for assistance in English and Spanish or contact NCI's LiveHelp service.
Clinicians and organizations that are interested in participating in this trial should contact NCI's Cancer Trials Support UnitExit Disclaimer.
Comprehensive Cancer Information - National Cancer Institute
Publicado por salud equitativa en 3:53