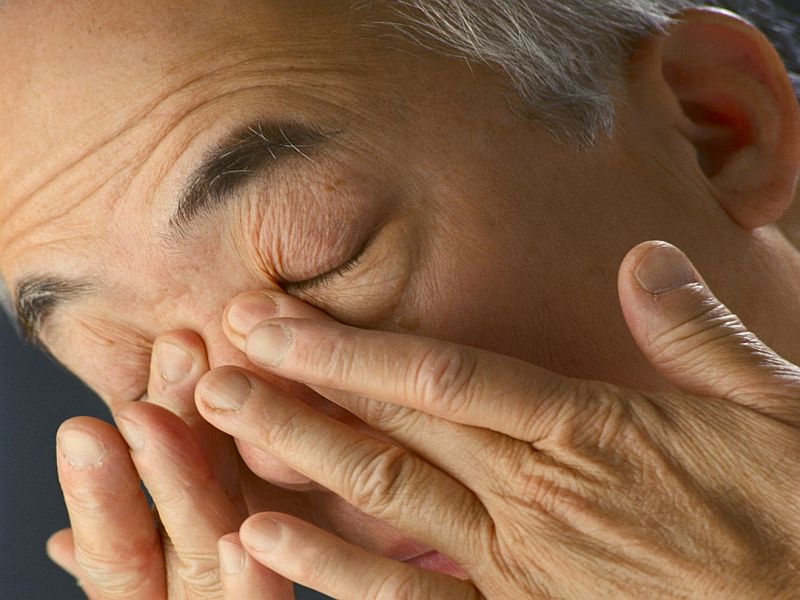 FRIDAY, Dec. 11, 2015 (HealthDay News) -- Increased stress could be a risk factor for the kind of thinking difficulties that can lead to Alzheimer's disease, a new study suggests.
However, the research did not prove that stress caused cognitive impairment or Alzheimer's.
"We know that, in general, stress makes it harder to think clearly," said Dr. Gayatri Devi, a neurologist at Lenox Hill Hospital in New York City, who was not involved in the study. "But here's data showing that stress may put us at risk for developing diseases like Alzheimer's."
The findings were published online Dec. 11 in the journal Alzheimer Disease and Associated Disorders.
The study authors gave questionnaires to just over 500 adults, aged 70 and older, asking about how much stress they experience. None of the adults had signs of dementia at the study's start.
The researchers followed these adults for more than three years. Each year, the adults underwent a series of tests related to their daily living, their memory and their ability to think clearly.
Adults who perceived themselves to be under the most stress had a 30 percent greater risk of early cognitive impairment, according to the study. This risk remained after accounting for participants' depression symptoms, age, sex, race, education level and genetic risk of Alzheimer's disease.
"The evidence suggests that perception of events is more important than the events themselves in predicting biological consequences and future health," said study co-author Dr. Richard Lipton, vice chair of neurology at Montefiore Medical Center and Albert Einstein College of Medicine in New York City. "This is good news because perception of stressful events is amenable to intervention."
Some approaches to reducing stress include cognitive behavioral therapy, mindfulness-based meditation, yoga and biofeedback, Lipton said.
Another way to reduce stress is to get a good night's sleep, Devi added.
"We all undervalue sleep, but it's very important," she said. "Sleep is probably the single most effective, efficient, inexpensive and widely available method of reducing stress, and we were all born experts at it."
Although the study did not show stress causes thinking difficulties, Devi described several ways stress and cognitive problems could be linked. Stress increases the hormone cortisol in the body and reduces the density of nerve cells in the brain, she explained.
"Stress also raises the levels of certain neurotransmitters in the brain and lowers others so the brain works less efficiently, and stress may play a role in laying down plaques responsible for cell death in Alzheimer's disease," she said. "When we're more stressed, we're more likely to have infections, and it affects our immune functioning. Immune functioning is thought to be related to developing Alzheimer's."
The study findings did not surprise Dr. Luca Giliberto, an attending neurologist at North Shore-LIJ's Cushing Neuroscience Institute in Manhasset, N.Y.
"Cardiovascular consequences of stress, including increased heart rate and blood pressure, may underlie increased cardiovascular risk in stressed subjects, leading to vascular dementia," Giliberto said. "Stressed subjects also often engage in unhealthy habits, such as smoking and low levels of exercise, all known risk factors for cognitive decline in general, not necessarily Alzheimer's disease."
The researchers also explored whether stress results from cognitive decline instead, but that doesn't appear to be the case, said study co-author Mindy Katz. She is a senior associate in the department of neurology at Albert Einstein College of Medicine.
"We think this is unlikely for several reasons," Katz said. For example, the authors measured stress before the development of cognitive impairment, she said. "Several analyses to test this hypotheses all concluded that this theory did not prove to be correct using data from this study," she said.
There is no magic recipe for reducing stress, but people must first recognize they have it, Giliberto said.
"Leading a stressful life is neither healthy nor productive," he said. "Eating right, performing daily exercise, avoiding excessive self-medication and getting enough sleep may do the trick. Often, the best remedy is to go back to what makes us happy: a song, a walk in the park or spending time with friends or grandchildren."
SOURCES: Gayatri Devi, M.D., neurologist, Lenox Hill Hospital, New York City; Richard Lipton, M.D., Edwin S. Lowe Chair in Neurology at Albert Einstein College of Medicine and vice chair, neurology, Albert Einstein College of Medicine and Montefiore Medical Center, New York City; Mindy Joy Katz, M.P.H., senior associate, department of neurology, Albert Einstein College of Medicine, New York City; Luca Giliberto, M.D., Ph.D., attending neurologist, North Shore-LIJ's Cushing Neuroscience Institute, Manhasset, N.Y.; Dec, 11, 2015, Alzheimer Disease and Associated Disorders, online
HealthDay
Copyright (c) 2015 HealthDay. All rights reserved.